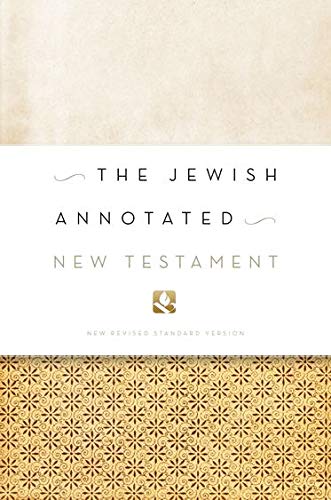 The Jewish Annotated New Testament, edited by two leading Jewish biblical scholars, Amy-Jill Levine and Marc Z. Brettler, is a welcome contribution to the study of the Jewish first-century milieu of the NT and its history of Jewish reception throughout the ages. Levine is University Professor of New Testament and Jewish Studies, E. Rhodes and Leona B. Carpenter Professor of New Testament Studies, and Professor of Jewish Studies at Vanderbilt University Divinity School and College of Arts and Sciences; she is the author of The Misunderstood Jew: The Church and the Scandal of the Jewish Jesus (2001). Brettler is Dora Golding Professor of Biblical Studies at Brandeis University; he is the co-editor of The Jewish Study Bible (2004).

In the book’s preface, the editors articulate the objectives of this magisterial work:

Just as we have learned much working on this milestone project together, the first time that Jewish scholars have annotated and written essays on the complete New Testament, we hope and anticipate that all who read the annotations and essays will gain a deeper appreciation of this central religious work. . . . We further hope that this volume will make the New Testament more welcoming to Jewish readers (many of whom are unfamiliar with its contents), that these new readers may become better acquainted with the traditions of their neighbors, and that perhaps they may even experience ‘holy envy’ in the reading. (p. xiii)

This Jewish take on the NT is unparalleled in terms of historical depth and international collaboration. A team of fifty Jewish contributors across the world have joined together to produce a user-friendly study Bible (NRSV) that sheds light on the Jewish roots of first-century Christianity. This reference tool aims to familiarize primarily modern Jewish audience with the original authors and audiences of the NT. The Jewish Annotated New Testament consists of useful and readable introductions to the NT books, brief annotations, maps, charts, sidebar essays, diagrams, and major essays. Also it is furnished with a concise glossary and a general topical index. The effectiveness of this volume would be enhanced if the editors included a bibliography at the end of this volume.

In the annotations, the readers will find a wealth of textual parallels between Second Temple Judaism(s) and the NT. To complete such a tedious task, the scholars utilize a wide range of Greek and Jewish sources such as the LXX, Apocrypha, Dead Sea Scrolls, Midrashim, Targumim, Josephus, Talmud, and other ancient sources. The social, historical, and religious contexts of the NT books are given due attention throughout the introductions, annotations, and essays. Moreover, a team of international scholars have cooperated to explore Jewish attitudes towards Christianity and vice versa since the “parting of the ways.” Hotly debated topics in academic and religious circles such as apologetic interpretation of Messianic prophecies, Christian supersessionism, and theological anti-Judaism occupy this exegetical work.

At the same time, it should be admitted there is no such thing as unbiased biblical interpretation. Accordingly, The Jewish Annotated New Testament is not an exception to this rule. For this reason, evangelicals might be interested to balance their theological understating of the NT by referring to David Stern’s Jewish New Testament Commentary: A Companion Volume to the Jewish New Testament (1992). As demonstrated below, the interpretations of The Jewish Annotated New Testament are often highly speculative. Consider below some of these speculative readings from the Gospels.

The first example is taken from Adele Reinhartz’s exposition on the bread of life discourse (John 6:22–71). While commenting on John 6:53, she says, “the passage may allude to the practice of theophagy associated with Greco-Roman mystery cults such as the cults of Demeter and Dionysus. If so, this may be one indication that the Gospel’s intended audience included non-Jews” (p. 171). It is unlikely that Reinhartz’s highly speculative proposal may ever be proven on exegetical grounds: (1) John’s Gospel definitely has a Jewish provenance (so the introduction to this Gospel on pp. 152–56); (2) John 6 consists of direct citations and allusions to the Hebrew Bible (vv. 31–33, 45–51); and (3) John 6 focuses on a Jewish audience throughout Jesus’s discourse (vv. 41, 52, 59).

The second example is Aaron Gale’s interpretation of Matthew’s nativity story. He undertakes to explore the virgin birth of Christ from various religious perspectives (p. 4). After outlining different interpretations of the nativity, Gale asserts, “Matthew borrowed from pagan traditions, in which a male god engages in intercourse with a human woman (cf. Gen 6.1–4)” (p. 4). It is extremely unlikely, however, that the primeval story of the intercourse between the sons of God and the daughters of Adam should be compared with Matthew’s report of Jesus’s birth simply because these biblical texts do not share any common ground. In addition, the Jewish character of Matthew’s Gospel excludes the possibility of borrowing from pagan traditions.

Despite the aforementioned reservations, I warmly recommendThe Jewish Annotated New Testament as an essential reference book for scholars and students alike. It will certainly spark further debate in the field of Jewish interpretation of the NT, and its editors should be commended for producing a fine work that may help thinking Jews and Christians examine their theological views on the unity of the Testaments, the Jewish roots of the Gospel, and the status of Jews from within post-Easter NT theology. Bible scholars, early Christian historians, Jewish theologians, and philosophers will be enlightened to read this interesting book.