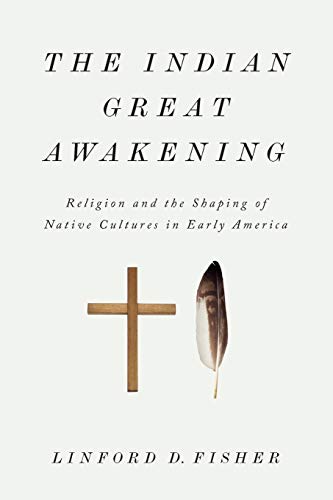 The Indian Great Awakening: Religion and the Shaping of Native Cultures in Early America

Linford Fisher is Associate Professor of History at Brown University, and his focus is in cultural and religious history in Colonial America. The Indian Great Awakening: Religion and the Shaping of Native Culture in Early America is Fisher’s Native-centered account of Indian responses to the Great Awakening. By Native-centered, Fisher means that Natives responded to the Great Awakening with the chief concern of meeting pragmatic and temporal needs as priority to spiritual needs. Facing the threat of being displaced by colonials, Natives sought self-preservation and privileged preserving identity, land, and tradition by accommodating to Christian affiliation. Though Christian affiliation led to dilution of Native spiritual traditions, this syncretistic accommodation lent itself to new opportunities and hopeful expectations of peaceful relations with their new colonial neighbors. Fisher argues: “Native individuals and communities often found missionaries, education, and Christian ideas and practices interesting and useful, but this interest and utility were almost always filtered through the realities of colonialism and a deep and abiding concern with retaining Native land and preserving community, sovereignty, and autonomy” (p. 7).

Over the course of eight chapters, Fisher presents compelling correlations to substantiate this argument. The Indian Great Awakening is essentially a chronological survey, with each chapter being governed by a unifying theme, which encapsulates Native life during the period each chapter covers. Chapter one looks at the background of Native and colonial life leading to the Great Awakening. He then examines stimuli to either propagate or be receptive to evangelism in chapter two, followed by a survey of key events and revivalist figures who influenced Natives during the Great Awakening, with an assessment of the Native response in chapter three. Fisher nuances the idea of conversion with a more helpful ascription of affiliation and substantiates this argument with primary source material in chapter four. In chapter five Fisher depicts the Indian Separatist movement by looking at portraits of individual Indian leaders: Samuel Niles, Samuel Ashpo, and Samson Occom. The critical place of education, particularly after the Great Awakening, is given attention in chapter six. The complexity and purpose of mass migration and why some migrated while others chose not to migrate is explored in chapter seven. Chapter eight concludes The Indian Great Awakening by looking at those who remained, namely the Narragansetts, who developed a self-sufficient and autonomous church with little outside help.

Fisher does not rely exclusively on eyewitness testimony or published accounts to build his thesis, nor does he neglect these methods. Rather, he examines an array of evidence—from a funerary object (the Pequot medicine bundle) to local church records of baptisms, marriages, and memberships. He leverages this evidence to establish his thesis that Indian responses to the Great Awakening may have more to do with what Christianity might be able to do for the Indians than alternate hypotheses.

Motivation is a critical component to the thesis of The Indian Great Awakening. In chapter two, Fisher sketches the motives for evangelizers and motives for the evangelized leading up to the Great Awakening. Fisher emphasizes the practical implications for evangelizing Natives. He observes that Christian colonials wished to civilize Natives as they expanded into their territory and grafted them into an Anglicized, Christianized, New World. The Natives were useful to combat Catholics in New France, helpful to the colonist’s survival, and, as King Philip’s War exhibited, were a viable threat. Likewise, for the evangelized, the colonists were powerful and had desirable assets. The prospect of English education was the chief asset that aroused Native’s interests in Christian affiliation. This motivation became a vital factor for Natives. Besides education, Fisher correlates the Native’s response to the Great Awakening, namely their interest in baptism and Christian profession, with an oft-simultaneous appeal for amenities—such as education and resources germane to successful education like clothing, food, property, or permanent facilities. These amenities often accompanied a profession of faith (p. 73). Fisher concludes that economic factors played a substantive role for both the evangelizer and evangelized.

As a historian Fisher steers clear of speculating on subjective realities that are indeterminable. His discussion on conversion in chapter four evidences this principle. Fisher asserts that conversion is not something as easily demonstrable as one might assume. In fact, using this term to describe the Indian’s response to the Great Awakening in particular and missionary efforts in general is a misnomer. It is more fitting to ascribe the Indian’s response as a realignment of affiliation—one that might be abrogated given appropriate circumstances. These circumstances include not regaining possession of land taken by colonists, or not receiving requested education and the accompanying accoutrements like blankets, English clothing, or other staples (p. 86). Fisher demonstrates the reality of abrogation by examining primary church discipline evidence, while also using this evidence to point out that realignment of affiliation does not typically appear in spaces where prior missionary efforts had not occurred.

As the Great Awakening waned, a declension pattern seems to appear in a number of the Native communities. Fisher argues that declension in devout worship, evidenced by a lack of individuals moving from baptism to communicant membership, indicates that Christianity did not do what the Indians assumed or hoped it might.

In spite of how vivaciously Fisher argues his thesis, one would not proffer that his thesis is inflexible. He agrees that affiliation is not merely a response to the usefulness of Christianity; the Great Awakening was also meaningful as well. This is a significant but subtle distinction. Fisher comments that “Christian affiliation were mingled and intertwined with the inner, personal, and subjective elements of religious experience and practice” (p. 106). The very presence and flourishing of Indian separatism indicates how deeply meaningful Christianity became for many Natives. For some, enough of their identity had been built around Christianity, causing them to keep rather than jettison this worldview and revert back to “savagery.” It is likely that the inculcation of Christian thought and Scripture through education must be credited for this flourishing.

The Indian Great Awakening is a helpful foray into the realm of Colonial social history. Readers will gain new insight and perspective that will challenge Whiggish predispositions.