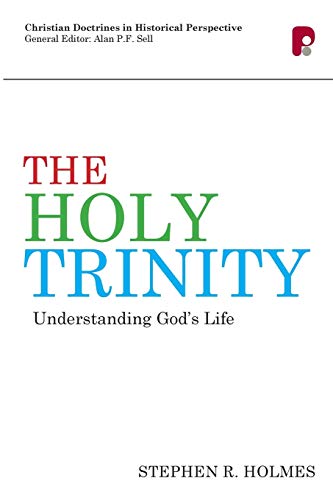 This is a volume in Christian Doctrines in Historical Perspective, a series edited by Alan Sell, and its author aspires to conform to its aim of reaching upper-level undergraduates. We are taken through the history of the doctrine from its biblical roots to its twentieth-century flower. Or are we? Is the flower an organically authentic growth out of those roots, especially as they become formed in the patristic era? Stephen Holmes thinks not, and this is the thesis he argues in this volume.

People have talked about a Trinitarian revival in the twentieth century, led by the likes of Barth, Rahner and Zizioulas. According to Holmes, it is, in fact, a novelty and not a revival. In the twentieth century, ‘There is generally a willingness to entangle the life of God with the history of the world, and often even a celebration of this move’ (p. 32). The verb is telling and repeated at the end of the volume, where the author lists other modern shortcomings, in summing up the results of his foregoing account (p. 199). Holmes’s exposition is not geared to a formal argument that the tradition got it right and the moderns got it wrong, though he does not hide his sympathies under a bushel. What he does argue is that two different things are going on. So this volume will help the reader be both informed on what the doctrine of the Trinity has meant historically (the exposition of doctrinal continuity over the centuries takes up the bulk of the volume) and warned about its twentieth-century fate theologically.

Stephen Holmes is a good, widely-read, and independent theological thinker, and this volume reflects it. Its aim seems to be quite well-achieved, although it is difficult to generalise here, for upper-level undergraduates vary a fair bit. The author is justified in presupposing that students will have some grasp of biblical materials, although a treatment of the OT such as that of Christopher Kaiser in The Christian Doctrine of God seems to me substantively more helpful than the discussion in this volume; but it is presumably directed at a lower-level undergraduate readership from the standpoint of Stephen Holmes. The volume is not without lapses. A footnote on page 167 refers to ‘Melancthon’, a typographical error repeated in the index where the said Reformer is awarded the Christian name of ‘Peter’. Holmes seems to assume in this chapter that when Luther reputedly made the celebrated declaration at the Diet of Worms that he would need to be convinced by Scripture and ‘manifest reason’ (reflected in the author’s chapter title), he meant by reason an independent source of theological knowledge. But Hans Preuss long ago made a strong case, followed by Brian Gerrish, for example, for maintaining that Luther at this point meant inferential reasoning on the basis of Scripture. Holmes perpetuates the mistaken belief that Hegel thought in terms of thesis, synthesis, and antithesis (pp. 184–85), and I am not sure that one has to be infinitely prickly in order to take issue with what he says about Locke’s Trinitarianism, the Deists’ intellectual power, and continuities between Kant and classical Christianity (pp. 173–79).

As to the plausibility of the author’s argument about the relation of modern to traditional Trinitarian thought, it is hard to make a brief comment. It seems to me that he makes a good prima facie case for his position, but the force, though perhaps not the logic, of it depends somewhat on whether one believes that the tradition inaugurated by the Fathers requires a degree of correction from Scripture. Of course, even if it does, this does not entail that twentieth-century theological innovation provided such a correction. If we ask about the structure of the volume, rather than its argument, I wonder whether, even at upper-level undergraduate level, it is advisable to begin the volume with discussion of Barth’s claim that there is no Logos asarkos (p. 6). Despite Holmes’s well-taken introductory assurance that his audience can skip the footnotes, perhaps the audience will have a sense of being inducted into an ongoing contemporary argument before it has become fully aware of the rules. (If we do not skip the footnotes, note—with reference to what Holmes says about Barth and Dorner on page 8—Barth’s account of Dorner in Protestant Theology in the Nineteenth Century.) But the experience of theological teachers who use this volume may prove Holmes justified, for many of his readers will have had exposure to Barth.

Where reviewers do not need to flesh out those generalisations which commend a volume, they frequently do need to do so in the case of criticisms, and the resulting assessment risks seeming disproportionately critical. So let me underline that Stephen Holmes’s intellectual qualities are in evidence in his exposition, and it is a welcome contribution. Kendall Soulen’s volume on The Divine Name(s) and the Holy Trinity, which reconfigures the debate over the Trinity, appeared too late (2011) for Stephen Holmes to take into account. It would have been interesting to see whether it would have made much difference to his argument; its fundamental thesis might have remained unaffected, but perhaps additional light would have been cast on the germane issues. Between them, the two volumes ensure that Trinitarian theology will remain alive and well for a little while yet.