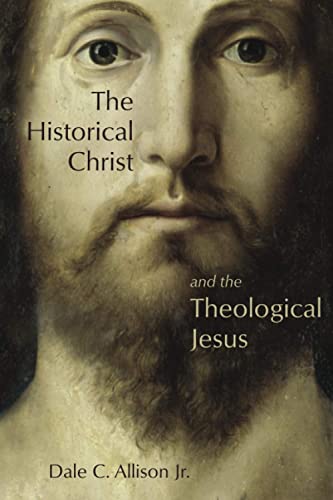 The Historical Christ and the Theological Jesus

Dale Allison’s The Historical Christ and the Theological Jesus is a curious book. The product of lectures given at Duke University in 2008, the book involves reflections on the quest for the historical Jesus, which Allison has come to regard as mostly futile in terms of either guiding our historical understanding of Jesus or as a service to the church. What makes this decidedly negative judgment on the quest so significant is that Allison has been one of the more prolific and competent American experts in the field.

The problems in the pursuit are manifold for Allison. (1) The quest has produced a plethora of Jesuses. This indicates that there is no clear methodological process or controls. (2) There is the problem of what the interpreter brings to the task that impacts his judgment. Here we get the famous observation that often what emerges is a Jesus much to the individual writer’s tastes. (3) History is able to yield only so much since our sources are limited and reaching back into the past is difficult and complex. (4) History should not hold sway over theology. Its results are too insecure and the possibility of central shifts is too real. More than that—and this emerges from the rest of the book—much in the Gospels is not history to begin with, but metaphor and parable, making the nature of the Gospels themselves an obstacle to rooting our understanding of Jesus in history.

All of this might make one think Allison has turned his back completely on historical study, but this is not correct. He argues that although we can be sure of very little about what Jesus exactly said, we can establish his emphases based upon what the general patterns in the Gospel tradition give us. He argues that trying to parse between what Jesus said and what the church added is near to impossible, but we can get a sense of what Jesus was about by looking at the general impression Jesus left in the tradition as a whole. Such a general impression is surely on the right track, or else the tradition becomes unusable at all to get back to Jesus. So what we have is a suggestion that the Jesus in the macro-level of the tradition yields far more to us than the microanalysis of pericope units. Allison remains open on miracles, not so much as a matter of historical analysis, but because human experience is just too full of such experiences to dismiss them. Allison goes on to affirm a Jesus who taught an apocalyptic hope in the kingdom and who focused on God as Father more than king. This Jesus is a “coincidence of opposites” who calls us to be engaged in the world even as he looked for God to bring a new world, which Jesus left mostly undefined. We have a Jesus who is far less than Nicea, but who is also hardly the figure of the Jesus Seminar. Jesus did have some kind of a messianic self-understanding. We have an errant Jesus, who expected a soon-to-come kingdom that did not come. We have a Jesus for whom we have no genuine context for his sayings to analyze what they really are saying. In short, Jesus remains a stranger and enigma to us, much as Schweitzer once argued.

What are we to make of Allison’s take on the quest? There are three points he makes very effectively in his well-written and entertaining study. (1) There are limits to what historical Jesus studies can yield. This is not the fault of those pursuing such study; it comes with the limits of what history can yield. These limits do mean that simply defining our understanding of Jesus to what history can show is to build a case on a less than adequate foundation. The impact of Jesus is also part of the story about him. The Gospels give us this as well as Jesus, and we are better off for it. (2) The danger in pursuing Jesus historically is that our own hopes and subjectivities get so in the way that it colors our analysis and judgments about what we do have in front of us. This is always a danger in the process, and it is why the conversation and debate about the material is so important. It is the only way to keep oneself in a position to see potential blind spots. (3) There also is something to be said for paying attention to the tradition as a whole in its emphases to get at what Jesus was about. Analysis of units alone is not the way forward.

However, there also are some real problems with where Allison lands. (1) To place the Gospels primarily in genres that speak of parable and myth is certainly to view these texts in ways far different than the authors and communities that originally produced them. Much like deconstructive historical Jesus scholars undercut the content of the Gospels in a divide-and-conquer method of handling the material, so Allison’s emphasis on this kind of genre-focus also removes the material from the frame in which it was originally placed. To try to recover the theological and human value of the material while casting aside the frame seems to put asunder the very type of linkage he wishes to maintain when he observes we have both history and impact in our sayings and stories about Jesus. It also rejects the very key frame the evangelists themselves had for the material. If the impression of the general tradition is accurate, then why did the early church impacted by this tradition so vigorously defend Jesus as a real historical figure whom they had genuinely experienced both in his life and teaching as well as in his resurrection? If I may appeal to the general tradition at one level, then why not also at this level? (2) Another inconsistency, it seems to me, is to appeal to the general character of the tradition without having a means of substantiating any details. In Allison’s critique of the criteria, which surely do have problems and limitations, he appears to have come to the point of despairing whether any details can be affirmed other than the general impression the entire tradition yields. Yet surely in a discipline that is full of judgment, historical study can and must attempt to sort out the details of texts, even if it must do so with a greater sense of humility about what it can achieve than normally comes with the territory. Microanalysis of the tradition can yield more than the meager results Allison affirms. It not only gets us to a messianically inclined Jesus; it can, I think, get us to a Jesus who saw himself vindicated by God to the degree that he would share God’s presence and lead the judgment one day. Such an understanding yields a christology far closer to Nicea than Allison allows.

In sum, The Historical Christ and the Theological Jesus is an interestingly honest book about the limits of historical Jesus study written by one who knows the field. This book will make you stop and think, making it well worth the read, even if in the end one’s sense is that Allison’s current position is as full of difficulty as the positions he critiques.