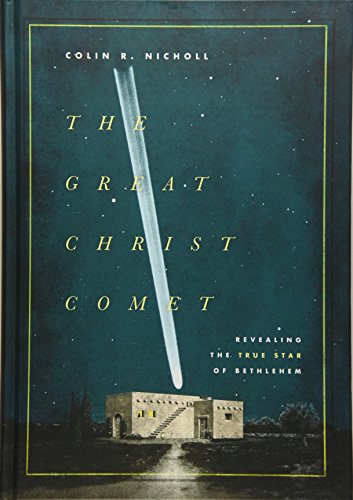 How do we explain the star of Bethlehem (Matt 2:2, 9–10)? Is it purely miraculous? Did God orchestrate a natural event to occur at just the right time to herald Jesus’s birth? Or should the narrative be understood as myth? Biblical scholars, mythologists, and scientists alike have made many suggestions over the centuries, but none has ever commanded a consensus. Colin Nicholl, a former NT professor at Gordon-Conwell Seminary with a Cambridge PhD, has produced an amazing work, mastering the history, mythology, and astronomy needed for the best case yet for a specific hypothesis—the “star” was a spectacular comet in the fall of 6 BC.

Nicholl first clears the deck of alternatives. He provides a detailed argument for the historicity of the narrative of the Magi in Matthew 2:1–12; this is no myth. He surveys previous theories: that the star was the triple conjunction of Jupiter and Saturn in the constellation Pisces in 7 BC, the occultations of Jupiter in Aries in 5 BC, a nova or supernova, one or more meteors, an ordinary star like Alpha Aquarii, a combination of astronomical spectacles in 7–5 BC, or the triple occultation of the bright star Regulus by Jupiter in 3–2 BC.

Nicholl next teaches us in detail the nature of a comet, its elliptic orbits and its appearance from the earth as it nears us, approaches the sun, rounds the sun and heads back towards earth, and finally shoots far outside our solar system. He discusses previous attempts to identify the star with known comets; the dates and phenomena just don’t fit the biblical data closely enough. But ancient records—from Greece, Babylon and China—are very fragmentary. Many comets we have since observed would have appeared during their periods of record keeping, yet only a handful are actually mentioned. So Nicholls mounts a formidable case that an otherwise unknown comet could account for all of the relevant data better.

Following Revelation 12:1–5, he traces how a very bright comet, the tail of which on certain days would have spanned the night sky, could have become visible as it passed the earth in late 8 or 7 BC en route to the sun but then began to show up in striking zodiacal locations in the sky in 6 BC. First it becomes visible in Virgo, in the place corresponding to her womb. There it grows in intensity, slowly dropping in the constellation until it appears as though the woman has given it birth. As the comet continues descending toward the horizon near dawn, however, it would appear as though the sun had come to rescue it from the neighboring constellation of Hydra (Revelation’s dragon) that threatened to devour it.

The long, narrow ellipse could have resembled a scepter, calling to the minds of Babylonian Jews the prophecies of Genesis 49:10 and Numbers 24:17, already viewed as Messianic, which they could have shared with the Magi. If a meteor storm appeared at the same time it could look as if it were emanating from Hydra’s tail and explain the casting of a third of the stars out of heaven. Even the one part of the Matthean story that has seemed to most to require a miracle can be explained. When very narrow comets descend toward the horizon, they can appear to be pointing directly at one location on the surface of the earth, like a building, so this comet could have appeared to focus directly on the house in which the Holy Family resided. Nicholl also shows how his theory could fit the prophecies of Isaiah 7–11, the NT references to Christ as a light, and the later testimony to the “star” in Ignatius and the Protevangelium of James.

I am not competent to evaluate the astronomical calculations on which Nicholl’s study is based, though he lays out his evidence in detail. But when John Lennox, one of the world’s great mathematicians, endorses it on the back cover, I trust Nicholl has done his homework! As for the biblical scholarship, I could quibble with Nicholl’s confidence that most of the guild believe the Gospel writers thought they were writing sober history here. The recent books on the virgin birth narratives by Lincoln and Moyise show the resilience of the view that this was the conscious creation of myth. Nor am I as convinced that an explanation relying on nature must be superior to one involving miracle. Not all of the biblical references Nicholl takes in support of his overall theory, finally, need be alluding to the comet for his theory to prove true.

But these are very minor points. Overall the work is a prodigious tour de force. Crossway has appropriately issued the book in hardback with high quality, glossy paper and four-color (as well as black-and-white) replications of photographs, paintings and carvings from numerous eras of human history, along with diagrams to make the science as clear as possible. All this does make for a quite heavy book, given its size, but it is well worth it. Short of the comet reappearing, there is of course no way to confirm Nicholl’s theory once and for all, but he has certainly made an extraordinary case for what must surely be the reigning explanation of the Bethlehem star, barring striking new evidence to the contrary.