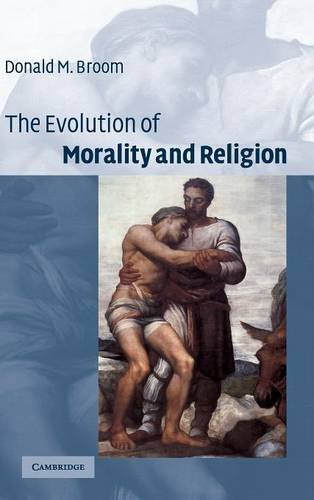 THE EVOLUTION OF MORALITY AND RELIGION

In this book, Donald Broom, Professor of Animal Welfare at Cambridge University, argues that morality and religion have evolved as a consequence of natural selection. Moral behaviour results in social co-operation that benefits the species as a whole. The principal function of religion is to underpin and encourage such behaviour. There are parallels and antecedents of human moral behaviour in other primates, other mammals and vertebrate animals. Animals that are able to live together and co-operate have been relatively successful in survival and reproduction, leading to the propagation of qualities facilitating such co-operation. Humans have thus evolved a set of values, feelings of obligation, desires to please and the ability to analyse consequences of possible actions and these increase the ability to co-operate and provide the biological basis for moral behavior. Altruistic behaviour is motivated, not only by the expectation of reciprocation, but also by feelings such as compassion, love and guilt. Even if altruistic behaviour does not advantage the individual, it can advantage the group that shares the altruistic tendencies, meaning that these tendencies can be propagated.

The book attempts a multi-disciplinary approach and briefly discusses various philosophical theories of moral behaviour. Broom concludes that neither a purely deontological, duty-based approach, nor a wholly utilitarian, consequence-based analysis fits our moral experience, but he does not attempt to put forward a comprehensive ethical system that avoids the problems of each. An obvious danger of this analysis is that we are left only with unprincipled compromises between the two. More discussion of whether this naturalised account of morality indicates that I should be moral in situations where it would seem to cost me in the long run would also have been helpful. Granted that we may have evolved with beliefs, desires and feelings that we should do the moral thing, regardless of the harmful consequences to us, should we obey such consideration or see them as illusions foisted on to us by society and our evolutionary past?

Perhaps unusually, the author wants to adopt a scientific explanation of religion while retaining a positive attitude to it. He argues that all human societies have a propensity for religion because it provides a structure for moral code that benefits them. Against e.g. Richard Dawkins he argues that the idea of a deity generally helps promote moral behaviour and is more easily grasped than are abstract justifications. In contrast to socio-biological accounts like those of Dawkins and E.O. Wilson, Broom suggests ways that religion can thrive in a scientifically-informed society. He argues that, though religions are understandably resistant to change, they need to respond to new scientific knowledge in order to survive and to avoid the harmful tribalism and extremism that can undermine their role in promoting morality. Broom expresses his dissatisfaction with attempts to justify belief in God by appeal to supernatural interventions, but does not tackle the question of whether the existence and properties of nature itself invite non-physical explanation. Instead, he assumes naturalism and mind-brain identify theory and suggests that God might be reconceived as the spirit of compassion and co-operation linking all sentient individuals, rather than the creator of the universe. He hopes such a concept might be usable by everyone.

It seems extremely doubtful that the naturalised idea of God proposed here could support morality in the way that more traditional concepts have, but those interested in morality and religion need to be aware of the resources of science to explain its origins and to provide reasons to act morally without appeal to God. In this connection, they should find this book useful.