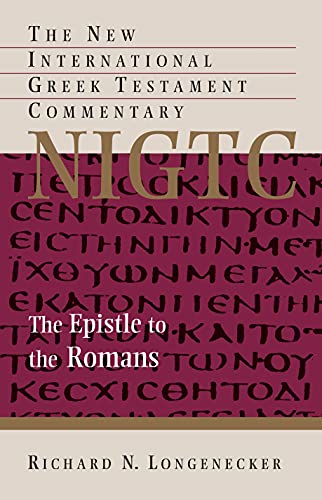 The Epistle to the Romans: A Commentary on the Greek Text

Given its length, depth of argument, and breadth of coverage, Longenecker’s contribution to the NIGTC series takes its place alongside the most significant and valuable English-language commentaries on Romans. In part, this is because it represents the fruit of a lifetime of study of Paul and his letters. Some of the seeds for this present work were sown in Paul, Apostle of Liberty (New York: Harper & Row, 1964 [rev. ed. 2015]), and the groundwork laid in Introducing Romans: Critical Issues in Paul’s Most Famous Letter (Grand Rapids: Eerdmans, 2011). It is best read alongside the latter, since the introductory section is relatively brief for a commentary of this size (39 pages), in many cases summarizing what Longenecker deals with at much greater length in Introducing Romans. The commentary divides the letter up into ten major sections, with various subsections therein. Each subsection of the letter is discussed under the following headings: “Translation,” “Textual Notes,” “Form/Structure/Setting,” “Exegetical Comments,” “Biblical Theology,” and “Contextualization for Today.”

A flow diagram is not given, but Longenecker’s understanding of the letter’s structure is readily discernable from the “Contents” and the beginning of each section. Notable here is that he understands the letter body to start at 1:13 (pp. 132–34), and 1:16–17 to function as the thesis statement of 1:16–4:25 (and not of the whole letter, pp. 155–57). This opens the way for Longenecker’s main thesis (reiterated at various points), that 5:1–8:39 functions as a discrete contextualization of the gospel, distinct from, rather than a development of, 1:16–4:25. Writing to a church that had its theological roots in the Jerusalem church (pp. 9, 267), Paul presents his “spiritual gift” (1:11) in 5:1–8:36, namely his contextualization of the gospel to gentile audiences, which he otherwise refers to as “my gospel” (2:16; 16:25; pp. 16–18, 27, 283). By contrast, in 1:16–4:25 and 9:1–11:36 Paul presents a Jewish contextualization of the gospel, referencing ideas already familiar to the believers in Rome. There are other notable theses and emphases: in terms of its genre, the letter is a “protreptic message” (logos protreptikos, “word of exhortation,” pp. 14–15, 41), the apostle filling “this ancient form of rhetoric with Christian content” (p. 768); Paul had two “primary” purposes (giving of the “spiritual gift” and seeking support for the Spanish mission), a “subsidiary” purpose, and two “further” purposes in writing Romans (pp. 10–11); 9:1–11:36 is an example of a “christianized version of remnant rhetoric” (p. 769); and there is a pervasive interest in rhetorical conventions and oral patterns, which Longenecker sees as key to unlocking various parts of the letter.

The commentary has a number of significant strengths. The foremost in my view is that each passage is interpreted within the context of the history of interpretation, from the patristic period to the present day. Longenecker often summarizes this history in a remarkably full manner. For example, the excursus on “The Righteousness of God” (pp. 168–76) references Plato, Aristotle, Tertullian, Cyprian, Minucius Felix, Arnobius, Lactantius, Erasmus, Ambrosiaster, Augustine, Simplicianus, Aquinas, Cajetan, Luther, Cremer, Stuhlmacher, Sanders, Dunn, Ziesler, and Fitzmyer. Second, Longenecker presents a wealth of suggestive information, enriched by decades of studying Paul’s letters. For example, the discussion of the phrase καθὼς γέγραπται (“just as it is written”) in 1:17 is accompanied by an overview of Paul’s use of scriptural citation formulas (pp. 180–82), and the interpretation of 5:13 is informed by the pattern of Paul’s use of οὐ (“not”) and ἀλλά (“rather,” “nevertheless”) in 2 Corinthians (pp. 592–93). Numerous other examples of the breadth and depth of Longenecker’s knowledge of Paul’s letters could be cited. Third, he has a keen eye to the apologetic force of some of Paul’s statements. This fits with his understanding of Paul’s “subsidiary purpose,” which was to defend against criticisms of his person and misrepresentations of his message (pp. 11, 283). Although several scholars have argued convincingly for an apologetic purpose behind Romans, arguably few commentators have been as attentive as Longenecker to the apologetic import of various parts of the letter.

There are weaknesses. First, the cost of the breadth of Longenecker’s coverage is a prose style that is typically discursive rather than precise, and is, therefore, quite different in presentation from, say, Cranfield on Romans. The effect of this is that it is sometimes difficult to access what Longenecker thinks about a particular verse. Second, I would have appreciated more weighing of interpretive options and validating of exegetical decisions. To give just one example, Longenecker argues that understanding ἐφ᾿ ᾧ (5:12) to mean “on the basis of which” is “more accurate linguistically and makes better sense contextually” than the other options (pp. 589–90), but he does not explain why this is so. Third, there is a certain unevenness of coverage, with some parts of the letter receiving much more attention than others. For example, although 48 pages are given to the treatment of 2:1–16, 6:1–14 is covered in merely 11 pages. Fourth, I am unpersuaded by Longenecker’s main thesis, which to my mind underplays the significant linguistic, theological, and biblical connections between 1:16–4:25 and 5:1–8:36.

These strengths and weaknesses combine to suggest that Longenecker’s commentary is better suited to some applications than to others. Among the major English-language commentaries on Romans it will not serve the pastor or preacher as well as some others. But any scholar, pastor, or student will learn much from the wealth of scholarship contained within this volume. When it comes to outlining the history of interpretation of Romans, it has very few peers.

Will Timmins is lecturer in New Testament at Moore Theological College in Sydney, Australia.