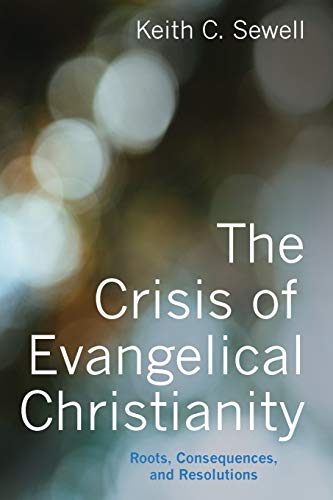 The Crisis of Evangelical Christianity: Roots, Consequences, and Resolutions

The title only remotely describes what the book is about. It begins, though, in a promising way. Its premise is that throughout the West, church attendance has “declined massively” (p. ix). This is but the end point of a “malaise that has been generations in the making” (p. x). The symptoms of this malaise are the loss of serious biblical preaching, compulsive singing of worship songs that are empty, and a lost capacity for reading serious literature. Is evangelical Christianity, Sewell asks, in “inevitable terminal decline” (p. x)?

This is not, however, the question that is then taken up. Rather, the reader is taken into a long and somewhat quirky recounting of church history. It begins with a section that runs from the patristic period to the Reformation (pp. 9–25). Then the author takes up divergent views among the Reformers on Scripture (pp. 26–38), their views on science and then the lingering effects of scholasticism (pp. 38–54), followed by the English and Scottish Reformations (pp. 55–76). Then there are discussions on pietism and the Wesleyan revival (pp. 77–94), the emergence of liberalism, fundamentalism and Pentecostalism (pp. 95–135). This brings the author to what he calls “crusading neo-evangelicalism” (p. 136–78). It is an account of the most prominent developments in post-War Western evangelicalism, such as the charismatic movement, evangelicalism’s foremost institutions, and some of their leaders. Yet, in all of this, there is no attempt made to connect this history back to the question with which the book begins. This does not happen until chapter 11 where he again makes the assertion that contemporary “evangelicalism is in deep trouble” (p. 178). But even here the issues are not pursued very carefully or thoroughly. He then concludes by asking if renewal is possible.

What has gone wrong with evangelicalism is that it has become worldly, lacks seriousness, and is simplistic. Evangelicals “have reduced the gospel to something much less than the good news concerning the kingdom of God” (p. 179). They have focused solely on personal salvation and ignored the “order of creation” (p. 6). He gives no explanation for why this happened or even how it came about. What he wants, by contrast, is the kind of Christianity that has at its center a world and life view, is “biblically directed,” and is serious. This is what is epitomized in the Kuyperian tradition of thought especially, perhaps, in Dooyeweerd’s thought. This, apparently, is what he meant earlier in the book when he said that the Reformation did not go far enough (p. 39). So, it is in this strand of Dutch Reformed thinking that there lies the answer to all that ails contemporary evangelicalism.

The question with which the author, a retired history professor, begins the book is a good question and we need to answer it. Indeed, there is much that has been written about it though none of this literature is engaged here. But aside from pointing to this stream of Dutch thought, there are no other answers.

And there is some questionable theology in this book. The author thinks that theology is a worthless undertaking because it is always corrupted by philosophical ideas (p. 42). This has happened but the author seems not to have noticed that the work done by evangelicals in the last five or six decades, much of it Reformed, is of an entirely different order. Further, he says that we do not have a knowledge of God since he cannot be investigated as can the creation (pp. 40–41). This is most curious since the premise of all Reformed thinking is that in Scripture we have God’s self-revelation. Our knowledge of God through Christ is not our discovery but a divine disclosure and a divine gift. To read Scripture is to be in the place where we can receive truths about God, his character, will, and ways. The author also thinks that “Christianity is not directly God-given, but our creaturely response to the gospel message” (p. 15). But are its truths not God-given in Scripture? And are we not committed always to reforming our ideas and practices in the light of God’s Word? Are we always left with nothing but our own stumbling, fumbling responses? Do we never know God’s truth?

This was a worthy project to undertake but this book is not a serious, or helpful, answer to the issues with which it starts. What is missing is a central, coherent, informed argument as to why the evangelical world has fallen on hard times. Without it, we are just left with the book’s many disparate pieces.