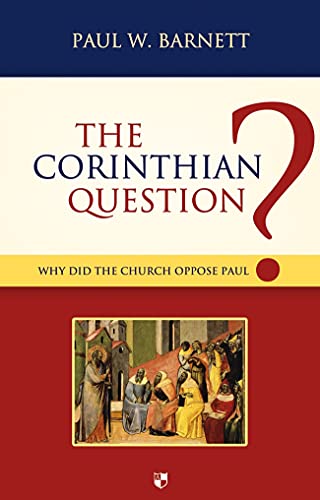 The Corinthian Question: Why Did the Church Oppose Paul?

The Apostle Paul’s missionary years were between a.d. 47 and 57. He spent much of this time with the church in Corinth from a.d. 50 to 57. When Paul founded the church, there was no record of conflict in Acts 18 within the congregation. By the time Paul wrote 1 Corinthians in a.d. 55, there was much conflict. It reached a particular crisis point by the time of writing 2 Corinthians in a.d. 56. Several other letters that 1 and 2 Corinthians mention also indicate that all was not well in Corinth (cf. 1 Cor 5:9–10; 2 Cor 7:8). Where did this opposition come from? In The Corinthian Question, Paul Barnett provides answers by examining the NT foremost.

Barnett’s answer is that the opposition came as a result of changing church dynamics. “The church membership changed in number and character in the years following Paul’s departure” (p. 209). This factor combined with Paul’s absence, the presence of a succession of other preachers like Apollos and Cephas, and a band of travelling teachers carrying letters of recommendation, led to the crisis at Corinth. Barnett’s focus on changing church dynamics is an undervalued viewpoint and deserves further attention in the study of Paul’s opposition at Corinth.

Recent studies have focused on other means to evaluate opponents at Corinth. In recent years sociological studies have become the dominant approach to Corinthian studies. Such works have examined the influence of Greco-Roman society upon the Corinthian congregation, drawing attention to the influence of Sophists, patronage, immorality, education, social standing, and secular leadership. While such studies have changed the perspective of viewing Paul’s Corinthian opponents by rightly drawing attention away from Gnosticism, they have focused more on Greco-Roman backgrounds rather than on the NT texts. Barnett’s approach is helpful, drawing attention again to the text of the Corinthian letters, the book of Acts, and portions of Romans to answer questions about opposition.

Barnett also uses a linear approach to the examination of Corinthian opponents. Rather than assuming that the Corinthian church is the same throughout the seven years of his known interaction with them, he rightly finds a progression that occurred within the church over time. Barnett prefers to see a development within the Corinthian congregation. It was small and supportive of Paul’s apostolic ministry when he first left Corinth in a.d. 50, but then it experienced a number of substantial developments. Other Christian leaders like Apollos came to Corinth. The church grew, and the aspects of church life were altered.

Barnett finds varying church dynamics plainly visible within 1 and 2 Corinthians. When Barnett examines 1 Corinthians, he sees four chapters that are devoted to changing relationships: (1) chapter one with the problems of factions; (2) chapter four with the elite’s judgment of Paul; (3) chapter nine with Paul’s defense for declining payment; and (4) chapter sixteen, which concerns the status of Apollos, Timothy, and Stephanas. When Barnett considers 2 Corinthians, he sees the dynamics that led to the tensions within the painful visit. He views the man in incest as the one who pained Paul deeply (2 Cor 2:1–6). Barnett’s approach supports the position that the commentator Hughes promoted nearly 50 years earlier.

The linear approach advocated within The Corinthian Question helpfully highlights other aspects of the situation at Corinth. By approaching the text of Corinthians in this manner, he draws attention to significant matters that are forgotten when the Corinthian situation is considered. He spends time considering Stephanas, a key person within Corinth. While this leader is mentioned only three times within the Corinthian correspondence, Paul exhorts the Corinthians to be subject to him (1 Cor 16:16). Barnett also pays attention to the third visit to Corinth, which many do not take into account in their evaluation of the problems in Corinth. By considering Rom 15:24–28, 16:21–23, and Acts 20:2–4, he concludes that the subsequent visit by Titus and Paul was successful in quelling the problems at Corinth. This point is often forgotten in Paul’s relationship with the Corinthians.

Besides providing a linear approach focused on the Corinthian letters, The Corinthian Question also includes helpful appendices for readers. Barnett includes a brief discussion of the size of the church at Corinth, estimating that it was approximately 200 people. He also gives a helpful timeline. This provides, in an easily accessible format, where each significant person in the Corinthian correspondence (Paul, Apollos, Titus, and Cephas) was for each year between a.d. 50 and 56. Many studies state where these people were, whether Corinth, Ephesus, or Macedonia, but Barnett’s chart is clear. It will be a great help for teachers of the Corinthian letters.

While The Corinthian Question raises several good points, it is concerning that Barnett concludes by declaring, “It seems the Corinthian crisis was a casualty of Paul’s missionary methods” (p. 210). He sees this as a result of Paul’s short length of stay in Corinth and the lack of having Titus with him. He also concludes that the tearful letter could have been written more diplomatically. Rather than placing the blame on missionary methods, the worldview that Paul faced deserves greater attention than Barnett gives it. Paul faced strong opposition from paganism, secularism, immorality, and idolatry. Barnett could benefit with further interaction with other historical studies.

Other studies within Corinthians reveal that the secular practices of the Sophists seem to have had a significant influence on the opposition at Corinth. These studies draw attention to rhetoric, division, boasting, and status that have clear overlaps with 1 Corinthians. Furthermore, the influence of idolatry and immorality within the Corinthian community seems evident from the recent commentary by Rosner and Ciampa. Finally, some interaction with the epistle of First Clement would have added to Barnett’s work. This epistle was written by Clement of Rome to Corinth somewhere within the years a.d. 95 and 97. Christians respected this letter, and Clement honored Paul calling him “the beloved apostle.” Further interaction with this letter would add to the viewpoints expressed by Barnett.

The Corinthian Question will be a good resource for academics, preachers, and teachers. It reads easily and interacts with a number of scholars within the field of Corinthian studies. It would be a good supplemental book to use with other commentaries on the text.