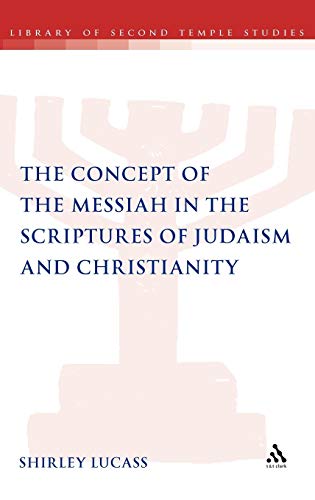 Messianism is an important issue to both Christianity and Judaism. The concept of the messiah lies at the heart of the Christian faith with the NT claims that Jesus is the long-expected messiah. Jewish theologians have approached messianism and Jesus from multiple vantage points, ultimately denying that Jesus was the expected messiah of Judaism. Shirley Lucass offers new insights and revives some older concepts that have been neglected in order to show that Jesus “could have been the expected Messiah of Judaism” (p. xi). While the book does focus on showing that the Jesus of the NT is compatible with the messianic expectations of the Hebrew Scriptures and the messianic concept coming out of the second temple period, the end goal of the book is to “clear the ground so that a new framework for [theological] dialogue can be constructed [between Christians and Jews]” (p. x).

The work begins with an introduction that serves as a statement of the problem: “A fundamental reason Jewish thinkers have rejected the claim that Jesus is the Messiah is the high Christology in which the claim has been expressed” (p.1). Lucass then notes that there have been three main reasons why Jesus’ high Christology, or the claim that Jesus is God incarnate, has been rejected. First, the view of the messiah as divine is not rooted in the Jewish tradition. Second, a divine messiah goes against monotheism. Third, there is no support for this idea in antecedent Judaism. Lucass believes that the elements of high Christology that are present in the NT are found in the Hebrew Scriptures through an understanding of royal ideology in the form of sacral kingship.

The first chapter begins where the introduction leaves off by noting the question, the state of the question, and the approach of the current study. The question is, “Is Jesus the Christ?” If that is the case, then Judaism fails; if it is not the case, then Christianity fails. Lucass, however, believes that this question has been ignored in most Christian-Jewish dialogue. She surveys the field of writing to show that there has been no substantial dialogue between Jews and Christians on this point in recent academic publications. All of the conversations have been one-sided with Christians discussing it with other Christians and Jews discussing the issue with other Jews. Historically, there have been several approaches to the question, but to Lucass none of them have been satisfactory. Lucass suggests a new approach. The approach that she adopts is not an historical enquiry into the person of Jesus and his ministry. Instead she makes an enquiry into the origins of the concept of the messiah.

In chapter two Lucass looks at the works of four Jewish writers (Joseph Klausner, Samuel Sandmel, Geza Vermes, and Hyam Maccoby) and their views on several topics. She looks at their views on Jesus, the person of the messiah, and the role of the messiah. Each of these writers reject that Jesus claimed to be divine and make the contention that within antecedent Judaism the messiah was expected to be a political leader and not divine. They all also contend that the NT notion of a suffering messiah does not square with the Jewish expectation.

Chapter three delves into the subject of kingship within the ancient Near East. Lucass discusses the person of the king and the role of the king within Egyptian, Hittite, Canaanite/Ugaritic, and Mesopotamian cultures. In each of these cultures the king plays a role in the priestly life of the nation, especially in making atonement for sins and establishing blessing between the national deities and the people.

The fourth and fifth chapters discuss kingship in the Hebrew Scriptures. Chapter four analyzes the Psalms. Within the Psalms Lucass discerns a developed royal ideology with similar features to those of the other ancient Near Eastern nations. This is manifested most closely in the king’s participation, and close association with Yahweh, in the enthronement festival. In chapter five Lucass believes that many of the same concerns that are in the Psalms are present in the Prophets. After the fall of the monarchy, however, many of the kingly responsibilities, especially those concerned with Yahweh’s bestowing blessing on the people, were given to others. Lucass believes, however, that the emergence of the servant was a replacement figure for the king.

Chapters six and seven look at the concept of the messiah during the second temple period. The sixth chapter discusses the person and role of the high priest. During this period the high priest is the anointed and is the mediator of blessing within the festivals of Israel, especially the Day of Atonement. The seventh chapter is concerned with the Son of Man figure in the second temple period. In the literature the Son of Man is a preexistent heavenly figure who is called the anointed and considered to be messianic.

The eighth chapter examines the NT. Lucass looks at the person and role of Jesus and how the NT writers describe him with all of the descriptors that are found of the messiah in the Hebrew Scriptures and second temple period. Most clearly the death and atoning work of Jesus are described. It was the concern of the NT writers to present Jesus as the messiah. Lucass argues that since they were Jewish and they present Jesus as messianic that at least in their eyes Jesus’ messianism was rooted in the antecedent Jewish tradition.

The final chapter discusses implications of the study for future religious dialogue. Lucass concludes by trying to show that Jesus could have been the messiah expected within antecedent Judaism. By holding this as a possibility Lucass believes that new dialogue can begin and that both Christians and Jews can agree that they both “emphasized different strands within the rich historic mix of early Judaism, then further dialogue can be directed at exploring what is to be gained and what is to be lost by emphasizing one strand to the exclusion of the other” (p. 209). This would then render the question from the first chapter as invalid.

The Concept of the Messiah is a well-written work with several admirable features. One of those admirable features is that Lucass gets to the heart of the matter and identifies messianism as the central theological issue impeding religious dialogue between Jews and Christians. She is correct in noting that this can often be neglected or discussed within each respective group with little or no interaction between Jews and Christians. Theologically, this does not strengthen either side, and more deliberate discussion needs to be had in this area.

A second helpful feature of this work is that she practices her intended goal by interacting with Jewish writers and theologians on this issue. Lucass does not just camp out in the writings of other Christians, but interacts extensively with the writings of Jewish scholars, as well as Christian scholars.

The final and most lasting contribution of the work is that it reintroduces the concept of sacral kingship. Lucass is correct in noting that sacral kingship “has been walked away from, not disproven” (p. ix). While the kingship found in the OT is not the same as kingship elsewhere in the ancient Near East, there are some biblical texts that need to be reevaluated. This is particularly true of some of the royal psalms, like Ps 110, and the description of the relationship of the king and Yahweh in the books of Chronicles. In 1 Chr 17:13, for instance, God says that he will be a father to the king and the king will be like his son. While biblical presentation is not exactly like that of sacral kingship found elsewhere in the ancient Near East, it does contain some similarity. Maybe there could be a modified understanding of kingship that takes into account all of these texts that have often been overlooked, especially by evangelicals. These are only a few of the helpful features of this book; there are many more.

Despite the admirable features mentioned above there are a few negative aspects of this work that need to be discussed. First, the title of the work suggests that it will analyze the Scriptures of Judaism and Christianity, but Lucass is selective in doing this. She does not interact with several important texts that deal with kingship. The books of Samuel, Kings, and Chronicles were mentioned only in passing and never received any in-depth analysis. These texts deal with the person and role of the king, as well as the establishment and decline of the monarchy, and need to be interacted with in a book that is concerned with kingship in ancient Israel. These texts should have been given at least a chapter within a treatment like this.

A second negative is that the book does not take on or interact with the anti-monarchial interpretations of the OT that have historically been the majority view. If messianism is related to the ancient Israelite conception of kingship, then how does one deal with the supposed anti-monarchial texts? Can the OT be largely anti-monarchial and the messianism present in the NT still be validated? These are questions that need to be answered in a treatment like this in more than a cursory way.

The final critique that I have to offer is that the end conclusion concerning religious dialogue is unsatisfying, and I suspect it is unsatisfying to most devout believers in both Christianity and Judaism. At the end of her work Lucass notes,

Both faiths could continue to worship in the same way . . . there would be no need to evangelize and no need to suspect that evangelism would take place. Both faiths could start to build a mutual trust and be further enriched by the different ways each has developed for worshipping “the one true God, the Holy One of Israel.” (p. 210)

Jesus makes exclusivistic claims about who he is (John 14:6 for instance) that cannot be ignored by either Jews or Christians. Furthermore, the Christian Jews within the NT saw evangelism of their fellow Jews as an absolute necessity. This is seen with Paul speaking in the synagogues and is seen clearly in his sentiment in Rom 9:1–5, where he is heart-broken over his fellow countrymen who have not come to faith in Christ. Jesus is seen as the fulfillment of all of the promises of Israel in texts like this one. This cannot simply be ignored.

Despite these few negatives, The Concept of the Messiah in the Scriptures of Judaism and Christianity would be helpful to any serious student who is interested in the subject of messianism. In the end Lucass does make a convincing argument that the way in which Jesus is presented in the NT is congruent with antecedent Judaism.