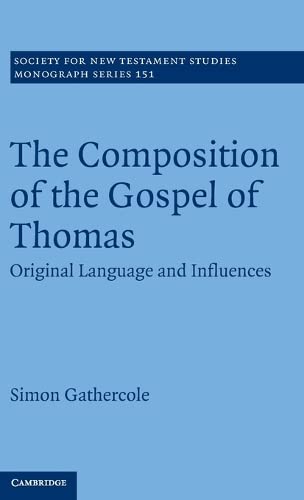 The Composition of the Gospel of Thomas: Original Language and Influences

Contemporary interest in the Gospel of Thomas (hereafter, Thomas) is high. In the academic world, there are papers delivered on Thomas and its relationship with the canonical gospels or Q at the Society of Biblical Literature meetings. There are online commentaries about Thomas which garner scholarly interest from around the world. Recently, a textbook aimed at students of early Christianity included Thomas along with the Gospels of Matthew, Mark, Luke, and John in its section entitled “Biography, anecdote, and history” (Steve Mason and Tom Robinson, ed., An Early Christian Reader, [Atlanta: Society of Biblical Literature, 2013]). In the popular realm, translations of Thomas are sold in mainstream bookstores in books such as The Five Gospels (edited by Robert Funk et al., [San Francisco: Harper Collins, 1993) and The Complete Gospels (edited by R. J. Miller [Sonoma: Polebridge, 2010]).

Thomas was discovered in 1945 at the village of Nag Hammadi in Egypt. Prior to this discovery, we had knowledge of it through a few references within the church fathers. We currently possess three fragments of Thomas in Greek and one full length version in Coptic. The extant Coptic version of Thomas dates to shortly before the year 350 AD, though components of it may date much earlier. The date of the Greek fragments is debated, but one of the fragments may date as early as shortly after AD 200.

It is the opinion of several scholars that the original Thomas predates the fragments substantially. A key factor in the dating of Thomas is its composition. That issue is the focus of this study by Simon Gathercole. Some propose that Thomas was originally written in a Semitic language. Several scholars such as April DeConick, Peter Nagel, A. Guillaumont, and G. Quispel, have advocated for an Aramaic origin of Thomas. Nicholas Perrin has argued for a Syriac original, linking Thomas with Tatian’s Diatesseron. There are others who are more convinced of a Greek origin. R. M. Grant and Helmut Koester have argued for a Greek original text. G. Garitte proposed a Coptic original for the Gospel. In the first half of The Composition of the Gospel of Thomas, Simon Gathercole argues convincingly that Thomas was originally written in Greek.

Gathercole advances three main arguments for supporting a Greek original for Thomas. In his second chapter, Gathercole provides reasons to doubt a Semitic origin of Thomas. The first and most obvious argument is the need to eliminate Greek and Coptic explanations for the word before arguing for a Semitism. This makes sense since the few copies that we possess of Thomas are in these languages. Gathercole’s other reasons for preferring a Greek original are also convincing. These include the need to establish a linguistic base for identifying Semitisms, classifying Semitisms, and then assessing these Semitisms for the significance of original language composition. It is also difficult to assess Syriac influence in the text due to the paucity of Syriac literature within the period under consideration, the rarity of the translation of Syriac works into Greek, and the unlikelihood of a bilingual translation that dates back to the time when Thomas was originally composed. Gathercole also claims that there is also uncertainty that there were mistranslations or wooden translations made. With all of these difficulties, it is better to assume that Thomas did not have a Semitic origin. The simpler hypothesis is that Thomas was originally written in Greek, in keeping with the language of the earliest surviving fragments.

His third chapter provides a detailed consideration of particular texts within Thomas in which an Aramaic or Syriac original is proposed. Gathercole examines 77 sections, comparing the copies of Thomas with a proposed Syriac or Aramaic equivalent. In each of these examples, Gathercole finds reconstructing another language behind the current text of Thomas to be unnecessary. His discussion can be detailed at times. Some who do not have understanding of these extra biblical languages will have difficulty in following the argument. Even without access to other biblical languages, readers will still understand Gathercole’s point that the need to find another language underlying Thomas has been greatly exaggerated.

In his fourth chapter, Gathercole provides six reasons for a Greek original behind the text of Thomas. First, the material evidence that we possess from Thomas is in Greek. Second, there is a strong level of correspondence between the words in Thomas and the Greek language. Third, Thomas contains a high proportion of Greek loan words. Fourth, Thomas is regularly associated with other works written in Greek. Fifth, the association that Thomas has with other Nag Hammadi literature also further strengthens a Greek origin. Finally, Thomas shows a close similarity to other gospels that are written in Greek such as: Matthew, Mark, Luke, John, and the Gospel of the Hebrews.

Gathercole concludes the first part of his book by strongly stating “that a Greek original (Vorlage) to the Coptic Gospel of Thomas is a virtual certainty with proposals for a translation into Coptic from another language being highly speculative” (p. 125). With the rationale that he has assembled, his argumentation is convincing.

From this base, Gathercole now moves into the second part of his study, which addresses whether Thomas is dependent upon the New Testament Gospels. Some see Thomas as independent of Matthew, Mark, Luke, and John by following the Western Aramaic theories of Thomas, and others see Thomas as dependent on the four Gospels by following the Syriac theory of composition. Gathercole develops a different approach, viewing Thomas as influenced by Matthew and incorporating some of Luke’s phrases. Gathercole also sees Thomas as further extending some of Luke’s special language.

His following chapters trace the influence of the Synoptic Gospels within Thomas, following Gathercole’s method proposed in chapter 6. This starts from Thomas’s reception of redactions from the Gospel of Mark rather than from the standpoint of an early dating of Thomas. Several scholars like A. DeConick, S. Davies, and K. Johnson will not like this approach due to their conclusions of an early date for the Gospel of Thomas. Yet, the possibility of Gnostic influence (cf. Gos. Thom. 83–84; 114), the presence of Matthew within Thomas, and the Lukan redactional features within Thomas would make a later date of Thomas likely. Despite the interest in an early date of Thomas seen in the work of some scholars, Gathercole provides a “short and sweet” presentation for a later date. Some will inevitably want more on this aspect, but this would mean the production of another book, which is unfair for the current focus of this study.

Within chapters 7 and 8, Gathercole examines the influence of the Gospel of Matthew and Luke within Thomas. In chapter seven, he notices that Thomas uses the actual name of Matthew. Since Matthew is a rather hidden figure within early Christian tradition, Gathercole highlights the author’s interest in Matthew. Gathercole then points out three instances that exhibit the reception of Matthew (cf. Gos. Thom. 13.3; 14.5; 44). In chapter 8, the author then considers the influence of Luke within Thomas. He evaluates seven instances where this is evident (cf. Gos. Thom. 5.2; 31.1; 33.2–3; 47.3–5; 65; 66; 99; 104). Then, Gathercole considers two possible influences of Thomas upon Luke (Gos. Thom. 72; 76.3). As with Matthew’s Gospel, Gathercole rightly finds that these are more convincingly explained as instances of Luke’s influence on Thomas, rather than Thomas’s influence on Luke.

Gathercole’s work is a groundbreaking study of Thomas. The results for those studying Thomas will likely be affected by this study for many years. This study is significant for those who are interested in the historical Jesus and assessing the influence of Thomas. By arguing for a Greek original (Vorlage) over against a Semitic one, it implies a later dating of Thomas. It also sets the stage for Thomas to be more dependent upon the canonical Gospels rather than representing an independent tradition about Jesus.