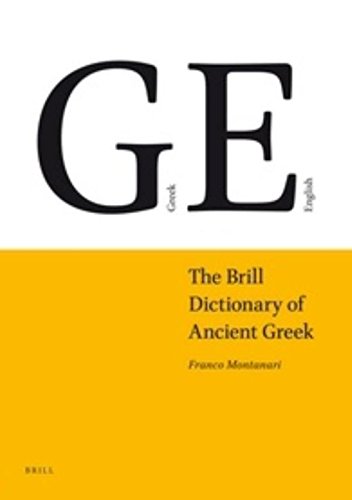 The Brill Dictionary of Ancient Greek

The present volume, produced by Franco Montanari, Professor of Ancient Greek Literature at the University of Genoa (Italy), is based on the third edition of his Vocabolario della Lingua Greca (Torino: Loescher, 2013). In his preface (pp. v–vi) Montanari indicates that the scope of his lexicon is not limited to Classical and Hellenistic usage but includes Greek Judaic-Christian literature up to the sixth century CE. He incorporates papyri and inscriptions in addition to literary material, and many proper names.

A second preface is written by Gregory Nagy, Leonard Muellner, and Madeleine Goh, who oversaw the translation and editing under the auspices of the Center for Hellenic Studies in Washington, DC. Here they point out that venerable work of Liddell and Scott, A Greek-English Lexicon (LSJ), originating in 1843, is dated despite its revisions and editions. Moreover, it was based on the 1831 edition of Passow’s Handwordbuch der griechischen Sprache, the original of which dates from 1824. Yet even that edition was based on the Griechisch-deutsches Worterbuch of Johann Gottlob Schneider, published in 1798. Thus LSJ is the product of extensive “cross-fertilization” and has not undergone major revision since 1940. In short the Brill Dictionary offers a fresh start with the most recent advances both in terms of accessible sources and lexicographic methodology (notably the Thesaurus Linguae Graecae).

The editors’ objective is “an accurate elucidation of each Greek lemma in English, and, accordingly, it is to be emphasized that the lexicon is not a translation of the Italian definitions in and of themselves” (p. vii). This is no small task for the 132,884 words which they seek to render into “as clear and idiomatic modern American English as possible” (p. vii). It boasts the principal parts of 15,006 verbs as well as citations from primary sources in almost every entry.

The prefaces are followed by extensive lists of abbreviations (grammatical terms, glottonyms, authors, works, collections, etc.; pp. viii–lx) before the lexicon proper. Though the layout is very detailed, the editors have included an excellent, color-coded explanatory diagram at the very front of the book where every features is explained clearly. Each entry is followed by a grammatical tag, translation, comment, example in Greek and English translation, followed by primary source references and many other details. For example, the entry on πληρόω (pp. 1683–84) begins with a list of all its principal parts, followed by definitions in the active, middle, and passive voices. Definitions are clearly indicated in bold print, followed by corresponding references to primary sources.

Montanari calls the Italian version GI, the English GE, thankfully avoiding the temptation to abbreviate the Brill Dictionary of Ancient Greek as BDAG! Nor would it be appropriate to consider the Brill Dictionary a replacement for BDAG or Lampe’s Patristic Greek Lexicon, which focus distinctly on Christian usages. Its rival is rather LSJ, and the preface has made a compelling case for the out-datedness of that volume. Whether the Brill Dictionary does in fact supplant LSJ remains to be seen. The incorporation of the vast swaths of data currently available is certainly a step forward, but one wishes the editors would provide some clarity on their lexicographical methodologies—the means by which they derived meanings from the respective sources. This would be valuable both for the curious scholar looking for a succinct distillation of recent lexicographical theory that lies behind such a project, but also the student looking for a basic roadmap of how to do a word study. But perhaps this is to ask too much of a book already compressed into thin pages and painfully small type font. This is an excellent volume well worth keeping to hand for serious Greek exegesis.