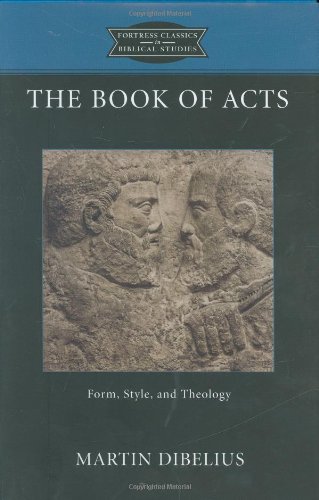 THE BOOK OF ACTS: FORM, STYLE AND THEOLOGY

A ‘new’ book on Acts by the late Martin Dibelius is indeed a surprise. This collection of essays has hitherto been published only in German, except for two. The editor, K. C. Hanson, has arranged these essays topically into three parts.

Part One is entitled ‘History and Style in Acts’. ‘Acts in the setting of Early Christian Literature’ analyses the style and content of Luke’s literary intention concluding that this literary character is the distinguishing feature of Acts. ‘The First Christian Historian’ sees Luke thus because of his selectivity of material, his attempt to write a consecutive account of events and his ability to interpret events. ‘The Book of Acts as an Historical Source’ suggests that the historicity of Acts can be reconstructed through literary criticism of the sources to ascertain the historical reliability of every individual unit. ‘Style criticism and the Book of Acts’ explores the distinctive style employed in Acts that differs greatly from the style of the gospel. Dibelius examines the traditions used by the author, and then analyses the style to discover what is their individual quality. ‘The Speeches in Acts and Ancient Historiography’ states how in antiquity, speeches were artistic devices used by the author to enliven what was said. Luke is set apart from other historians of his day in their use of speeches since he used them not only to illuminate the situation but also to proclaim the gospel.

Part Two is called ‘Paul and Peter in the Book of Acts.’ ‘Paul in the Book of Acts’ examines Luke’s sources and literary intention seen in his careful selection of events in Paul’s life to decide which parts are historically reliable. ‘Paul on the Areopagus’ suggests that Luke wrote this speech as an example of a typical sermon to Gentiles, put in the setting of Athens. It is a symbol of Christian theology in the environment of Greek culture. ‘Paul in Athens’ is an abbreviated form of the previous essay. In ‘The Apostolic Council’ Dibelius explains that it is not merely a reproduction of a tradition about circumcision-related conflicts but a careful literary unit used to re-emphasize unconditional salvation to the Gentiles ‘The Conversion of Cornelius’ speaks of how Luke inserted Peter’s vision and shaped his speech so that it would stress what for Luke was decisive evidence of the acceptance of the Gentiles by God.

Part Three, ‘The Text of Acts’ deals with whether the text of Acts was as reliably preserved as the text of Luke’s Gospel. All the Gospels followed a literary genre that was well established in the Christian communities and hence care was taken to preserve the authentic text so as to accurately preserve the tradition. However, even at an early period, various texts of Acts existed. Hence it would have been exposed to the typically varied fate of the literary text.

In The Book of Acts, the editor has added additional notes for each essay and updated bibliographies ‘to bring the reader up-to-date in the discussions’. He has also provided English translations for many of the Greek and Latin quotations. The editor’s arrangement of material facilitates easy reading. The presence of several typological errors is unfortunate. While one cannot be so native as deny the numerous complexities in the Acts of the Apostles, the essays in The Book of Acts leave one wondering whether there is anything left at all in Acts after being subjected to the kind of scrutiny that Dibelius puts it to. It represents an example of German liberal scholarship. However, the contemporary issues dealt with here cannot be ignored in current research in Acts.