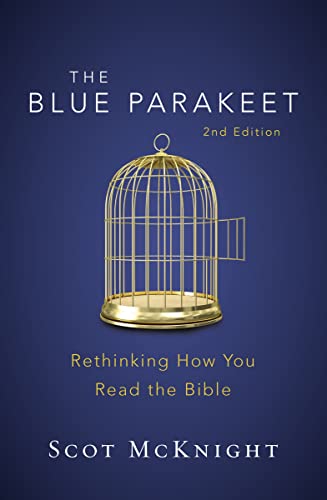 The Blue Parakeet: Rethinking How You Read the Bible

This is a very personal book, full of autobiographical snippets and accounts of Scot McKnight’s own journey in his understanding of how to read the Bible. The tone is chatty and anecdotal. Along the way he narrates his move from what he calls a fundamentalist upbringing, through to his work as a biblical scholar, first at Trinity Evangelical Divinity School, and now (significantly) at the broader North Park University in Chicago.

The book’s title, The Blue Parakeet, is a metaphor, picked up from an occasion when McKnight was surprised to find a brightly coloured escaped bird in his garden. ‘Blue parakeet’ passages in Scripture are those which don’t fit easily with whatever theological framework we are working with, leaving us with the choice either to explain them away and preserve our framework, or to alter our theology in the light of them.

McKnight develops this in the book’s four parts. In Part 1 (‘Story’) he proposes that Scripture should be conceived of as ‘Story’. This is in contrast to five other approaches to the Bible: ‘morsels of law’; ‘morsels of blessings and promises’; ‘mirrors and inkblots’, i.e. projecting our own ideas onto Scripture; ‘puzzling together the pieces to map God’s mind’, in order to produce a theological system; and ‘maestros’, i.e. focusing on one Bible-writer or character, such as Paul (pp. 44–54). A key example he gives of the benefits of his approach is Jesus’ temptations in Matt 4:1–11. Once we see that Matthew is developing the Bible’s grand Story, he says, we can then recognise that the point of the story is not to teach us how to resist temptation, but to present Jesus as either the Second Adam or the true Israel (or both), who perfectly resists temptation where previously Adam, Eve, and Israel failed to (pp. 64–65).

Part 2 (‘Listening’) argues for a ‘relational approach’ to the Bible that turns Scripture ‘from facts-only to facts-that-lead-to-engagement with the God of the Bible’ (p. 87). This is in contrast to what he calls ‘the authority approach’, which prizes such terms as ‘inspiration’ and ‘inerrancy’, which he alleges ‘fosters a relationship with the Bible’ rather than with God (p. 84). The key conclusion is that ‘those who have a proper relationship to the Bible never need to speak of the Bible as their authority … the word “authority” is swallowed up in loving God’ (p. 93).

Part 3 (‘Discerning’) aims to get us to see, says McKnight, that the church has ‘always read the Bible in a picking-and-choosing way’ (p. 122), for example in not requiring converts to renounce all wealth, despite Matt 19:23–30 (pp. 125–26). We need to acknowledge and develop our ‘patterns of discernment’, realising, as we relate the Bible’s world to our own, ‘that was then but this is now’ (which is McKnight’s key hermeneutical principle). This he calls reading ‘with tradition’, and not (as he says conservatives do) ‘through tradition’ (p. 144).

In a final long section (Part 4), he seeks to apply all these principles to the case study of women in church ministries, arguing passionately and emotively that every position of ministry and leadership in the church ought to be open to women. He asserts that the key ‘anti’ texts (1 Cor 14 and 1 Tim 2) in their historical context aim only to bar (not women as such but only) the uneducated and untaught from leadership.

Such a personal and at times emotional book deserves a response of a similar tone. So here it is: my frustration with The Blue Parakeet only grew the more of it I read. There were, along the way, moments of (sometimes qualified) approval. Stressing that we read Scripture only in order to relate in love to the Lord is vital for anyone who’s been brought up with a different approach. Acknowledging that in many areas of life the application of Scripture is not a simple affair and that many Christian sub-cultures think that they are ‘just reading the Bible’ when a far more complex process involving culture, tradition, and hermeneutics is going on remains an important point to make at a popular level. However, McKnight asserts that the positions he is reacting against are often too simplistic and lacking in historical awareness, and in return I want to level the same charge at his response to them. It is of course unfair to expect a popular-level book such as this to engage in detail with every viewpoint, but McKnight too often speaks of the positions he’s warning against in terms of ‘some people say …,’ before presenting a straw-man. In his handling of inspiration, he says, ‘To make the Bible into God is idolatrous’ (p. 89), giving no indication that generations of theologians have strongly confessed inspiration while thinking through rigorously how this is not idolatrous. Similarly he gives the impression that unless we downplay ‘authority’ and ‘inspiration’ we’ll never reach biblically rich understandings of passages such as Jesus’ temptations, which is of course not true. And in the case study, he gives little indication at all that there is a thorough complementarian response to his position. His suggestion that complementarians use Genesis primarily to perpetuate the fallenness in Gen 3:16 (p. 189) is especially unfair, giving no hint that they seek to find male headship pre-Fall. (As an aside, it wasn’t clear to me that his approach to this issue in Scripture actually was a putting into practice of his principles. If, as he argues, Paul intended to bar women from leadership only because they were uneducated, then is he actually using any of his ‘discerning-the-direction-of-the-biblical-Story’-style hermeneutics in reaching his egalitarian conclusion? Isn’t he simply applying today [what he takes to be] the same explicit principle consciously brought to bear by Paul back then?)

Anyone who (like me, unlike McKnight) had no oppressive fundamentalist upbringing and has enjoyed discovering the richness of the doctrine of Scripture and consequent approaches to Scripture found in the likes of John Calvin and Herman Bavinck (to name but two of the greats) is likely to find this book bemusing, and so thin as to be misleading at times. Anyone who has a background more like McKnight’s and who has never been helped to encounter the traditional orthodox view of Scripture at its best, in writers such as these, needs to know that McKnight has almost silently thrown large chunks of a very attractive and truthful baby out with the unthinking fundamentalist bath-water. In so doing, I fear that he risks perpetuating for another generation of Christians the ignorance of the best traditions of teaching about the Bible among contemporary evangelicals which he so laments, as do I.