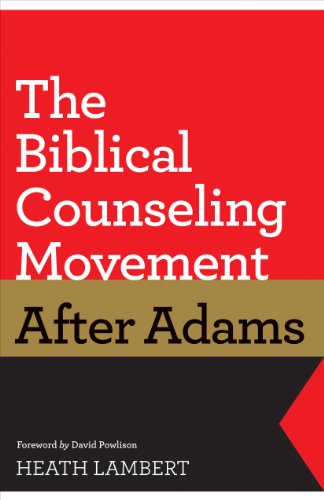 The Biblical Counseling Movement after Adams

Health Lambert’s The Biblical Counseling Movement after Adams is a historical, theological, conceptual, and methodological comparison of the work of the first and second generation of counselors in the biblical counseling (BC) movement. The first generation is most exemplified by the founder of the BC movement, Jay Adams, and a large portion of this book examines his life and work. David Powlison (along with others such as Paul Tripp, Ed Welch, and Tim Lane) represents the second generation who built upon Adams’s original work.

Lambert, a professor of biblical counseling at Boyce College in Louisville, Kentucky, analyzes the movement as someone who stands not as an outside critique looking in but as a sympathetic participant in the BC movement. Thus, he gives us an insider’s perspective.

Chapter 1 describes a four-part theological drama that sets up the context in which Adams wrote his key work, Competent to Counsel. Chapter 2 explains the conceptual concepts that help to structure a biblical model: Adams’s emphasis on sin and behavior and the second generation’s development of a theology of suffering and motivational issues. Chapter 3 overviews methodological advancements, starting with Adams’s more formal and authoritative style and the second generation adding to it “an approach based on the biblical teaching of loving, brotherly, one-another relationships” (p. 46). Chapter 4 describes the BC movement’s engagement with apologetics. Lambert shows how Adams had a very different disposition toward believers and unbelievers and how other evangelical counselors have seen the tone of the second generation as quite different than Adams’s.

Chapter 5 interacts with Eric Johnson’s analysis of the movement and seeks to defend the idea that the first and second generations of biblical counselors “hold the same basic position on Scripture and the relevance of outside information for the counseling task” (p. 136). Chapter 6 sets up an example of theological advancement by showing how “idolatry is a secondary problem flowing out of the primary problem, which is a sinful, self-exalting heart” (p. 139). And the final chapter argues that Adams’s bombastic style needs to be understood as a “conscious strategy” (p. 158) that fits into a larger context. Lambert also notes that Adams was humble enough to recognize that his work was imperfect and that it needed others to come afterward to improve it. Lambert ends with a few concluding thoughts for counselors.

Two major ideas clearly emerge from the book. First, BC is united about much more than it is divided about. Second, there has been significant development along the lines of conceptual content, methodology, and apologetics over the course of forty years.

Those who buy into stereotypes about BC will be helped to understand the context that gave birth to Adams’s work. Readers will see that Adams did not create a simplistic counseling model; rather, his desire was to create something that was rigorously biblical. Also, Adams does find some value in psychology.

Lambert strikes the very delicate balance of both criticizing weaknesses in Adams’s model while also working hard to honor Adams for his unique role as the founder of the BC movement. As with any historical evangelical movement, he helps us to see how the second generation has moved beyond the founder while at the same time building on his original work. Two significant elements of the second generation’s work are highlighted in the book. One is that Powlison and others have emphasized the importance of walking alongside a sufferer and not dealing with the sin only. The other is that the second generation has done a masterful job of developing a biblical understanding of human motivations.

Another insight for the reader of this book is the importance of future generations thinking critically, rather than assuming that previous generations understood everything perfectly. Powlison’s essay “Crucial Issues in Contemporary Biblical Counseling” (Journal of Pastoral Practice 9 [1988]: 65–66) represents the BC movement’s first effort at being self-critical. Along with Powlison, second-generational counselors have continued to articulate conceptual concepts and methodology that have refined and strengthened the BC movement’s thinking and practice over the last twenty years.

Who should read this book? While The Biblical Counseling Movement after Adams will be useful for those both inside and outside of the BC movement, those who might be especially interested include: