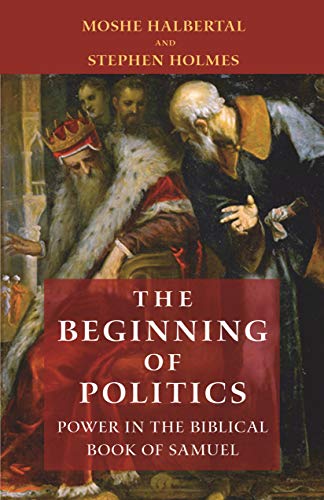 The Beginning of Politics: Power in the Biblical Book of Samuel

Jewish philosopher Moshe Halbertal and political scientist Stephen Holmes have produced a much-needed book that first and foremost treats the biblical book of Samuel as a book about politics. Their work reflects a relatively new trend in biblical scholarship, spearheaded by Yoram Hazony at the Herzl Institute in Jerusalem, to read the Old Testament mainly as a work of philosophy, as opposed to a religious document (cf. The Philosophy of Hebrew Scripture [Cambridge: Cambridge University Press, 2012]). Through a close exegesis of the biblical text relating to the lives of Saul and David, Halbertal and Holmes provide abundant insights into the workings of worldly politics that is relevant to “wherever and whenever political power is at stake” (p. 1).

The book is composed of four chapters of exegetical study, along with an Introduction and a Conclusion. In the Introduction the authors explain how politics originated in ancient Israel. Unlike pagan mythologies that locate the origin of kingship in the divine realm, the book of Samuel locates its origin in a concrete human condition, namely, Israel’s failure to keep faith with Yahweh, the then-incumbent king of Israel, under the duress of Philistine infiltration. It is “by no means free of a residual bitterness” (p. 10), they argue, that God acceded to Israel’s idolatrous request for a king and practically abdicated his throne. This divine bitterness is a key, according to the authors, to understanding the ambivalent, or indeed negative, attitude of the Book of Samuel toward human political projects. In the subsequent chapters, the authors attempt to decode the self-defeating dynamics of human politics that are encrypted in various episodes relating to Israel’s first two kings, Saul and David.

Chapter One covers various episodes in 1 Samuel 9–2 Samuel 9 with special attention to the first two kings’ efforts to gain or maintain sovereignty. Both Saul and David are portrayed as thoroughly political figures, ready to do anything in the pursuit of power. The authors observe, however, that their moral or religious trespasses have much to do with the inherent nature of politics itself, not necessarily rooted in the personality of those who inhabit high offices (p. 17). They further argue that since sovereign power easily turns into something that is desired for its own sake, those who have successfully attained it become pathologically obsessive about holding on to power.

Chapter Two examines two distinct modi operandi of political violence: one by insane paranoia exemplified in the episode of Saul’s slaughter of the priests at Nob, and the other by calculation dramatized in David’s murder of Uriah through a chain of agency. Although being the locus of absolute power, the lengthy chain of agency that kings command serves as a convenient mechanism to confer deniability and impunity, as a chain of surrogates help the kings to dissociate themselves from the crimes committed on their behalf. This theme is masterfully explored in the story of Uriah, the authors notes, through the power of David to “send,” i.e., his capacity to control action from a distance (p. 82).

Chapter Three explores the self-defeating dynamics of dynastic monarchy through two consecutive narratives—the rape of Tamar and the rebellion of Absalom. Although dynastic monarchy assures the smooth transfer of power, thus ostensibly obviating civil wars among factious groups during the interregnum, the authors contend that it is fraught with self-defeating potential. This is illustrated in the costs that David had to pay in order to maintain his sovereignty until he bequeathed it to Solomon. According to the authors, dynastic monarchy did not resolve the problem of violent transfer of power, but instead replaced it with the fratricidal and oedipal violence within David’s own household. The ultimate price that dynastic monarchy exacted upon David is encapsulated in his cry: “My son, Absalom! My son, my son, Absalom!” (2 Sam 19:4; p. 172).

Chapter Four deals with David’s last words to Solomon. It encompasses the many political themes explored in the preceding chapters, especially the ambiguity of political action, as underscored by David’s order to kill Shimei, to whom he had promised amnesty (p. 161). The authors observe that the essential ambiguity of political action, which stems both from the impossibility to know the true motivation of a power wielder’s action and from the possibility of the motivation being truly composite, namely moral and political at once, feeds into the readerly impression that David was a master of walking the fine line between morality and manipulation.

Overall, this book represents an exemplary fusion of biblical studies and political science. It is commendable both for its close reading of the biblical text and for its penetrating insights into worldly politics. Specifically, Halbertal and Holmes, as a team of a philosopher and a political scientist, effectively bring their respective expertise to bear on their interpretation of the book of Samuel. However, the authors’ lack of expertise in the ancient context of the Old Testament reveals itself at times. For instance, the authors argue that David used Michal’s love in the service of his political interest and held him responsible for the moral sin of instrumentalizing what ought not to be instrumentalized (p. 33). But this may not be a fair accusation of David, because David used marriage, not love, for his political purpose, not to mention that romantic love did not figure prominently in ancient marriage alliances. It is a modern sensibility that considers using marriage as a means to something else as a morally dubious act. Marriages in traditional societies were by definition practical alliances, instrumental to other ends. Hence it is unfair to equate the way David treated Michal with Saul’s treatment of David, since Saul’s behavior was morally depraved as it involved deception and murder. But this example is an exception to the otherwise impressive hermeneutics that informs the book. Evangelical readers may take issue with this or that element of the authors’ exegesis—for instance, Samuel portrayed as a political rival of Saul. They may even complain about the complete lack of God-talk (theology) in the book. Nonetheless, this book is certainly worth a read.