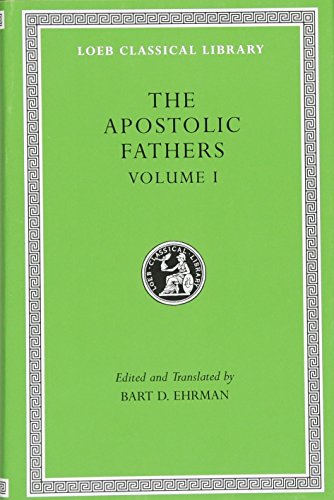 THE APOSTOLIC FATHERS, VOLUMES I AND II (LOEB CLASSICAL LIBRARY, 24)

Bart Ehrman’s new text and translation of the Apostolic Fathers in the Loeb series is an excellent example of solid scholarship presented in an accessible and engaging manner.

The ‘Apostolic Fathers’ is a modern term used to refer to a collection of early Christian writings, most of which were once held to have been written by followers or companions of Jesus and his apostles. Few readers now maintain this traditional understanding of their authorship, although it is widely accepted that at least some of these writings may be earlier than at least some of the writings that were later included in the NT. They vary widely in form and in content. Most were probably written in the first half of the second century, although 1 Clement (a letter from the church in Rome to the troubled church in Corinth) and the Didache (often described as a manual of Christian instruction) are likely to be earlier. Thus they are of vital importance in the interpretation of the NT.

Various ancient discussions of these texts address the question of whether some of these texts should have been included in the NT, and it appears that at least some Christians thought that they were. Hence Ehrman’s introduction to the collection draws attention to the inclusion of the Shepherd of Hermas and the Epistle of Barnabas in the Codex Sinaiticus, and to the inclusion of 1 and 2 Clement in Codex Alexandrinus. Textbooks sometimes suggest that they are there only as appendices, but this is by no means evident from the manuscripts of these famous codices of the Bible. As Ehrman observes, ‘the scribes of the great codices evidently assumed these writings to be part of the sacred Scriptures’.

Ehrman’s general introduction contains a helpful bibliography, and is complemented by lively and accessible introductions to each individual text. These include an overview of content, discussion of authorship, date, historical significance, and some account of the textual tradition of each writing.

As is standard in the Loeb format, the original language (nearly all Greek, but with some Latin) faces an English translation. The Greek text reproduced is based on the standard editions of Funk-Bihlmyer and (for Hermas) of Molly Whittaker, though Ehrman introduces occasional amendments to their texts. The English translation reads smoothly, but is faithful to the original. On occasion, ambiguities are brought out by the inclusion of possible alternative translations. These are signalled clearly by the use of square brackets and italics. Thus Ehrman notes that the Greek presbuteros may mean either an older man or a presbyter, and that the adverb suneideseos may refer either to self-awareness or to consciences.

Footnotes are sparing (though there are more than in many Loeb volumes) and are used mainly to draw attention to places where these texts are parallel to or perhaps dependent upon Jewish scripture or the writings later canonised as the NT.

This is a fine introduction to some important texts, and a worthy successor to the edition of Kirsopp Lake that it now supersedes.