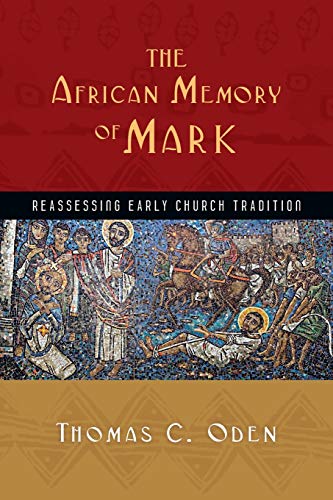 The author is Director of the Center for Early African Christianity at Eastern University, St. Davids, Pennsylvania. Oden is one of the general editors of the landmark Ancient Christian Commentary on Scripture series (29 vols.; IVP, 1998-2010).

The purpose of the book is “to show the greater plausibility of the African memory of Mark than of its modern [Western] mythic alternatives” (p. 256). The intended audience is not a “scholarly” one, but ordinary readers, especially “youthful Christian believers on the African continent” (p. 14). The author claims that his work is the first in decades to reassess the historicity of the African traditions concerning St. Mark, his African origins, his relationship to the apostle Peter, and his African ministry and martyrdom.

Oden unwraps for the reader a rich and venerated history of African church tradition and story that is virtually unknown outside of Africa. By the phrase, “the African memory of Mark,” Oden means the ancient African tradition concerning St. Mark, “the full weight of cumulative evidences coming out of the African continent over the length of centuries, including evidences from archaeology, epigraphic and literary sources, as well as oral traditions and stories of the saints” (p. 29). Within this African memory, embedded as it is in Coptic (and less directly, Ethiopian) Orthodox history, tradition, and liturgy, resides an ancient account concerning St. Mark. According to this memory, Mark was born in Cyrene of Africa (as a diaspora Jew), was related to the apostle Peter, and-upon Peter's death in Rome and the completion of his gospel-journeyed to Alexandria and established the apostolic church. There he also died a martyr's death. St. Mark is therefore understood today by the Coptic Orthodox Church as the apostolic father of African Christianity (based in Alexandria), just as Peter is understood by the Roman Catholic Church to be the apostolic father of Western Christianity (Rome).

Oden is passionate about his subject matter and believes that it holds significance for helping to lift African Christianity out of its low self-esteem, induced-at least in part-by colonialism and the oppression that too often accompanied it. Oden believes that to recover and retell to African Christianity its own apostolic story-obscured by Western dominance and its skepticism towards African traditions-is to offer her a sense of place and destiny among the nations of the world as an intellectual and spiritual equal.

Oden seeks to legitimize the African memory of Mark by arguing for its historicity. Some, however, will probably question aspects of Oden's historical reconstruction. First, three of Oden's four stated sources are late (see pp. 60-76). Second, Oden occasionally defends conclusions that are based upon slight biblical evidence (e.g., in his interpretation that the house of the mother of John Mark served as the venue for the events of the Last Supper and for Pentecost; see ch. 6). Third, Oden occasionally wants to suggest that an aspect of the memory is historical despite concessions of its highly speculative nature (e.g., the suggestion that Peter, guided by Mark, fled Jerusalem, took refuge in Babylon, Egypt, and wrote 1 Peter from there; see pp. 114-22). Oden is right, however, to question the thoroughgoing skepticism of the earlier German scholarship of Adolf von Harnack and Walter Bauer. Moreover, I agree with Oden that it is historically probable that Mark journeyed to Alexandria and established there the apostolic church (so also, most recently, specialist Birger Pearson, “Earliest Egyptian Christianity,” Society of Biblical Literature Annual Meeting, 19 Nov 2011; Eusebius, however, was apparently unaware of any tradition concerning a Markan martyrdom).

Oden has stumbled upon a fascinating African church tradition and has presented it in an accessible way. With this book, Oden once again invites an ethnocentric and parochial Western Church to explore the continent of Africa and its distinct Christian legacy. Indeed, it is legitimate to ask whether Oden's ideal reader may be the Western believer despite the statement that the intended audience is “believers on the African continent.” The book opens another world to the former. It bids this reader to the top of the hill to gaze upon the vistas of African Christianity, to marvel at its distinctive history, and to appreciate its robust intellectual and spiritual traditions. The book gently chides the reader for assuming that the Western version of the faith was all that there is or all that matters. It desires to stir a passion within the reader to explore African Christianity more and to read further.

Let other historians be alerted that the time is ripe for a thorough reassessment, to follow up what Oden has initiated (and let this include less unwarranted skepticism in the vein of Harnack and Bauer, with new approaches to better assess African traditions and historical memory). In the meantime, African Christianity may find in the tradition of the “African memory of Mark” a unique sense of continuity with the earliest apostolic witness and thus a stronger sense of shared destiny in the global Church's mission of bringing gospel blessing to the rest of the world.