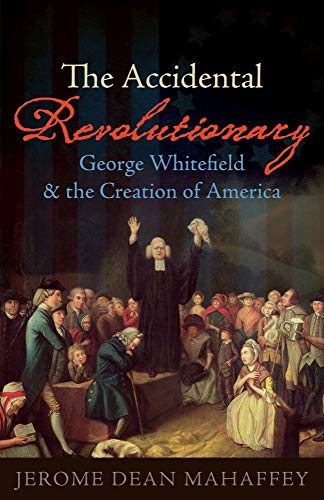 The Accidental Revolutionary: George Whitefield and the Creation of America

Mahaffey, who earned the BS (University of Memphis), MA (Syracuse University), and PhD (Arizona State University West) in communication arts and holds the Corrine Graf Endowed Chair of Mass Communication at Indiana University East, initially developed an interest in Whitefield because Whitefield was an effective communicator. Mahaffey offers The Accidental Revolutionary as a more accessible version of his 2007 volume,Preaching Politics: The Religious Rhetoric of George Whitefield and the Founding of a New Nation (Baylor), referring readers to Preaching Politics for primary source data. As Mahaffey shows, Whitefield's communication prowess contributed significantly to the formation of an American identity. Whitefield facilitated “the first uniquely American collective experience” (p. 58) through his use of advance publicity, his strategic preaching itineraries, his proclamation of a consistent message throughout the colonies, his ability to unify disparate parties, and his perfected skill in eloquent and dramatic speech.

Mahaffey's claim, however, is not to assert that Whitefield was a gifted communicator who honed his craft. Rather, he argues, “Without Whitefield . . . American independence would have come much later, if at all” (p. xi). Mahaffey aims to show that Whitefield developed the “logic template” (p. 145) in his arguments defending the religious revivals of the Great Awakening that would be employed in arguments defending the Revolution and that ultimately “one's identity and the rules about Americanness originated from the Awakening worldview as sowed by George Whitefield” (p. 189). In the end, “of all the colonial leaders and their ideas, if you remove Whitefield and his contribution, no one else had the message, popularity, and influence to shape American colonists into people who could declare independence” (p. xi).

Mahaffey traces several details in Whitefield's life that relate to his thesis, including his support of King George II during the Seven Years War (1756-1763), his work with Benjamin Franklin in successfully calling Parliament to repeal the Stamp Act (1765), and his wariness of the British government's “deep laid plot” to constrict the colonies' civil and religious liberty (p. 153). But the best way to see Mahaffey's argument is in comparing the “logic templates” of the revivals and the Revolution. During his 1739-1741 tour of America, Whitefield sparked a widespread revival by preaching a new-birth message, teaching that people are not converted because their parents are church members, but because they experience heart-change. Whitefield's message undermined established ministers who saw the revivals as enthusiastic frenzy, not Spirit-induced transformation. To give people a reason to abandon old churches and organize themselves in new churches that embraced heart-religion, Whitefield alleged that some of these ministers were unconverted and were using arbitrary power to limit Christian freedom. He developed an “us versus them” polarity between revivalists and anti-revivalists that allowed the revivalists to form a shared identity across the colonies.

Turning toward the Revolution, Mahaffey recognizes, “Whitefield did not publish anything that would stir the colonial crisis” (p. 170). Nonetheless, he holds that revolutionaries infused Whitefield's revival logic-template with political rhetoric. The colonists were suffering under leaders who ruled by heredity and exercised arbitrary power in a way that threatened their civil and religious liberty, which made them unfit for their positions. Such reasoning made the American colonists feel justified in abandoning Britain and reorganizing themselves in a nation that embraced true liberty through self-rule, so the Americans formed a new identity as “us” and identified the British as “them.” Mahaffey says that while “the new birth was the center of Whitefield's message and ministry,” “the concept of the new birth was larger than religious conversion,” for it symbolized transformation both from “sinner to saint” and from “European to American” (p. 191). In the end, Mahaffey's portrait of Whitefield is of a shrewd politician, whose political savvy is the “framework for his character, dramatic skills, marketing skills, eloquence, passion-laden sermons, political involvement, and public conflicts” (p. 191).

Mahaffey's book offers several compelling insights. Whitefield was the key figure in the first event that united all the American colonies in one shared experience, and the parallels between Whitefield's arguments in the revivals and the arguments in the revolution are striking and undeniable. It is also clear that Whitefield used his political savvy and communication expertise to carry out his religious and civil enterprise.

Still, the volume gives a few causes for pause, such as Mahaffey's use of sources dating only to 2002 and earlier-except for three sources in his foreword and conclusion. From a macro-level viewpoint, it seemed to this reader that Mahaffey was onto something, but that the extremity of his argument felt somewhat contrived. It is possible that the Revolution may not have occurred when it did without Whitefield, but Whitefield was not a political revolutionary, and it is unconvincing to suggest that other revolutionaries could not have developed logic like Whitefield's to convince a people to declare independence. The difficulty with his thesis is that an argument about counterfactuals is ultimately impossible to substantiate. In essence, Mahaffey is right to argue that Whitefield contributed in some way, albeit unsuspectingly, to political independence through his preaching methods and content and that he shared a belief with many in the eighteenth-century English-speaking world that the flourishing of religion relied largely on political liberty. But one should not attribute more to Whitefield than warranted and should not forget that spiritual liberty mattered more to Whitefield than civil liberty.

Mahaffey's book is a well-communicated book with a provocative thesis. It is recommended, bearing in mind the reservations above, both for those who want to understand Whitefield's engagement with the political realm and for those who have forgotten the role that religious leaders played in the long saga that ushered colonial America into revolutionary America.