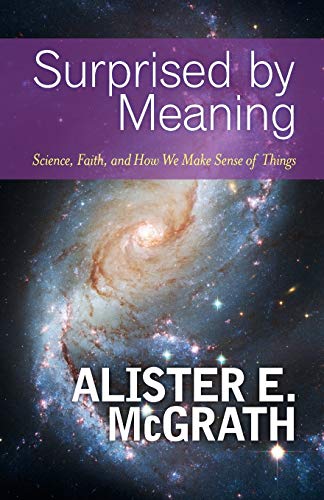 Surprised by Meaning: Science, Faith, and How We Make Sense of Things

Alister McGrath continues his prolific publishing in this introduction to theology and science. McGrath, who holds doctorates in both biology and theology, has published widely on this topic already, including his trilogy, A Scientific Theology. As the subtitle indicates, the present volume interweaves three themes: the nature of science, the nature of faith, and the possibility of meaning. Regarding the final theme, McGrath's thesis is twofold: (a) people long to make sense of the world, and (b) science cannot address questions of meaning, whereas Christian faith can.

In defending these ideas, McGrath is actively seeking to overturn the “warfare thesis” of New Atheists (e.g., Richard Dawkins), that is, that science and religion are in fundamental conflict. Instead, McGrath contends that science and faith answer different sets of questions. He speaks highly of science, but limits its scope to “secondary problems” about how the universe is structured, while only faith can deal with “ultimate and decisive questions” about the meaning of the universe (p. 39). For instance, though science can explain the physical world, it cannot explain its own explicability: Why should the universe be rational and accessible to study at all? Science assumes rather than demonstrates the explicability of the universe.

McGrath is careful, however, not to push the distinction between science and faith to an unbridgeable chasm. On the contrary, science and faith both employ an “abductive” method-inferring from the evidence (whether physical or biblical) to the best possible explanation. Further, though science and faith investigate different levels of reality, there are points of contact between the disciplines: science prompts questions that only faith can answer. For instance, why are physical constants calibrated so precisely to allow for the development of life (the “anthropic principle”)? Or why do separate evolutionary lineages produce similar physical forms (“teleological convergence”)? The Christian reply to such queries is that God has purposefully designed the universe to sustain life in order that his creatures may glorify him. While the anthropic principle and teleological convergence do not prove the Christian narrative, they “resonate” strikingly with Christian faith (p. 72).

McGrath concludes by considering the issues of ethics and meaning, domains beyond the purview of science. McGrath hammers the New Atheists for seeking to hijack science-a values-neutral discipline-to serve ideological ends. Instead, McGrath contends that science itself is neutral, but its presuppositions resonate with faith rather than atheism. Then, shifting the conversation back to meaning, he considers questions of identity, value, purpose, and agency, arguing that Christianity answers these far more adequately than its atheistic rival. So in a book examining the relation between science, faith, and meaning, the capstone of McGrath's argument for Christianity is that secular worldviews cannot provide a solvent ethic or ground for meaning.

The main contribution of this book is the balanced approach to the relationship between scientific and theological knowledge. McGrath is an articulate spokesman for the compatibility between modern science and theology or, more pointedly, evolution and creation. For instance, though McGrath finds William Paley's teleological argument outdated, he draws on famous Darwinians Thomas Huxley and Ernst Mayr, who both testify to a “wider teleology” in nature (p. 76). In other words, science attests that the evolutionary process has built-in purposiveness, thus producing resonance between the narratives of evolutionary development and God's providential creation.

There are two areas that could have been expanded in the book. The first is the omission of Intelligent Design (ID): McGrath does not take the opportunity to address this widely held Christian viewpoint. Indirectly he seems to oppose ID when he argues against Paley, who, like ID, invokes special creative acts as the explanation for design. This means that McGrath appeals to God's agency primarily for the fine-tuning of physical constants at the origin of the universe without explaining how God's agency operates after the beginning. ID has made much of God's ongoing formation of “irreducibly complex” structures, so it is unfortunate that McGrath does not specify how God relates to the evolutionary process after the universe's origin.

Another drawback in the book is that there is little to distinguish his Christian apologetic from other religious apologetics (e.g., Judaism, Islam, or Deism). Though he references the Trinity on two occasions-to say that God can be both wholly transcendent and lovingly immanent (p. 53) and that God's personal agency means we reason after his acts, not presume what he must do in advance (p. 70)-these insights are more generically theistic rather than necessarily Trinitarian. We can applaud McGrath for being sensitive to the distance between Christian theology and apologetics, but more needs to be said for him to close the gap.

On the whole, though, the book is a helpful introduction to the interface between science and theology. Though occasionally repetitive, McGrath's prose synthesizes vast citations from theological, scientific, philosophical, and cultural commentators into his clear and conversational style. One of his most interesting techniques is paralleling Richard Dawkins's narrative about Charles Darwin's work. Like Dawkins, McGrath speaks appreciatively and enthusiastically about Darwin's contribution to science; the subtext, of course, is that Christians can appreciate modern scientific theory without capitulating their faith. While McGrath has not addressed the perceived divide as fully as he might have, he has provided a useful introduction to and case for the compatibility of science and faith.