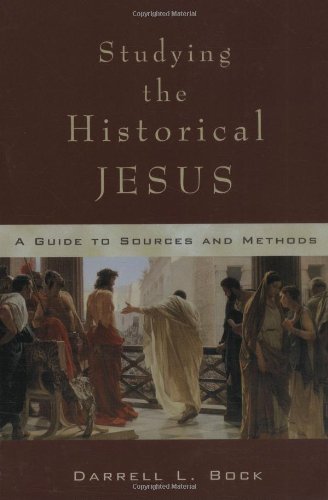 STUDYING THE HISTORICAL JESUS: A GUIDE TO SOURCES AND METHODS

Darrell Bock’s latest book appears to have a double purpose. On the one hand, it is designed to be a basic textbook for historical Jesus study, and in this respect, it covers admirably a lot of the ground which is vital background for this task. (The subtitle is important in this respect: readers should not be misled into thinking that the book actually covers historical Jesus material per se.) On the other hand, the book is an introduction to (and something of a justification of) Bock’s larger project to write an account of the ministry of Jesus according to the portrait of the canonical Gospels: an admirable goal which should need no justification, but which unfortunately in the current scholarly climate requires a very considerable effort to gain a hearing. This later book has recently appeared under the title Jesus According to Scripture, and promises to be an exciting contribution to the scholarly historical Jesus fray.

The present book, Studying the Historical Jesus, begins with an introduction, the first section of which is a very good survey of the primary sources for the Jewish background to the study of Jesus (16–21), which will certainly be useful to beginning students as an outline of the various Jewish sources. This is followed by brief treatments of the Gospels, and of Rabbinic literature. Thereafter, the book is divided in two halves: Part I, ‘Jesus in his Cultural Context’; and Part II, ‘Methods for Studying the Gospels’.

The material in Part I is extremely well organised and useful. There are very useful collections of material relating to ‘Nonbiblical Literary Evidence for Jesus’ (ch. 1), ‘A Basic Chronology of Jesus’ Life’ (ch. 2), ‘Political History’ (ch. 3), and ‘Sociocultural History’ (ch. 4). These last two in particular give an excellent ‘feel’ for the political shenanigans of the second and first centuries bc, as well as an evocative impression of daily life and economic issues in Palestine. This is achieved though the use of considerable evidence from numerous primary sources.

The second part on method begins with a concisely written chapter on ‘The Three Quests for the Historical Jesus’. Thereafter, the rest of the book covers the various ‘criticisms’: historical, source, form, redaction, tradition, and narrative criticism. It is this second half of the book which swims against the tide of scholarly consensus, and Bock is to be applauded for the way in which he shows up the bluntness of some of the tools which have often conventionally been used in Gospels criticism.

There are a few quirky aspects in the book. The common fallacy that one needs to be much more careful with Jewish material that post-dates Jesus than with material which considerably predates him is evident. (Earlier ideas becoming redundant is just as likely as later ideas not having yet been conceived.) The Essenes appear to be regarded as co-extensive with the Qumran community (91, 135). And there are references to the ‘Equite class’ (rather than the Latin plural Equites, or the equestrian class), to ‘Israeli independence’ in the Hasmonean period (90), to ‘Seleucid IV’ (88) and a few other similar oddities. These are minor criticisms, but such features might be off-putting.

In general, the book is an extremely readable volume, and provides very good coverage of the considerable ground that it surveys. Students will find all the chapters in the book to be a very good combination of readability and density of material.