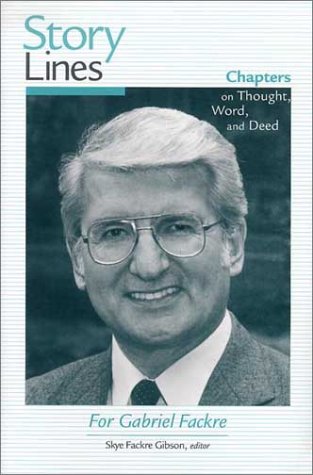 This volume is the brainchild of Gabriel Fackre’s daughter, Skye, in recognition of her father’s contribution to the Christian theological world. Such is the respect he has commanded may eminent theologians have contributed to the festschrift. Most of the thirty-one contributors are from North America, with the exception of Alan Sell and Jurgen Moltmann, and collectively reflect the ecumenical spirit of Fackre himself.

The organizing principle of this work is concerned with ‘story’, something that Fackre is particulary associated with, and each essay expands a little on a particular aspect of the Christian narrative.

The thirty-one short chapters are split into three parts. The first part discusses the ‘meaning’ of the Christian story today. The second section examines the ‘mission’ of that same story, and the last section looks at the Christian story as ‘ministry’.

Martin Marty opens the first section by commenting broadly on the increasing popularity and recovery of the ‘narrative’ after what he recognizes as its eclipse by a turn to abstract theories (8). In particular, he expounds on the role of the church historian claiming that though their discipline be modest, systematicians and ethicists etc., would have very little to say without them (11).

After Donald Bloesch describes the ‘gospel’ as more that just story and wider than doctrine (15), and George Lindbeck’s response to Fackre’s work on the Lutheran-Roman Catholic Joint Declaration, Elmer M. Colyer offers an interesting chapter entitled ‘Toward the Trinity: Reading the Christian Story with a Holistic Hermeneutic’ (28). Here he suggests that the ‘Christian Story rendered by the biblical narrative has a trinitarian substructure … which can be discerned when the narrative is read with a holistic hermeneutic’ (28). Colyer, although employing a more holistic approach to the Bible, ponders why narrative theologies have not been more forthrightly Trinitarian? In short, Colyer suggests a narrative that follows in the footsteps of Fackre’s: a narrative that is freed from the constraints of certain philosophical commitments and is related to the theological content rather than the literary form of the Bible (34–35).

Further contributions in this section are from Carl Henry, S. Mark Heim and Robert J. Jenson amongst others, all adding their particular perspective on the importance of ‘story’.

Jurgen Moltmann opens the second section entitled, ‘The Mission of the Story Today’. He elaborates on the need for a church with a universal mission and missionary theology that is rooted in the risen Christ and aiming at Christ’s universal coming (98). This will be achieved by a theology that is truly ecumenical. What matters in this multi-religious world, in which Christianity is in retreat, is not your denomination, but whether you are a Christian or not. Furthermore, in this age of the globalisation of capitalism, the time is right to enter into an ‘ecological age’ and achieve the goal of an ecumenical Christianity, which is to bring reconciliation between humanity and the earth (105). Other contributors in this section include George Hunsinger, Carl Braatan and Alan Sell.

The third section includes contributions from Paul Achtemeier, Richard L. Floyd and Joseph Bassett. It broadly consists of nine sermons that in different ways elucidate on the role of the Christian story as ‘ministry’. This is followed by an excellent bibliography of Fackre’s published work to date.

Overall, although this volume promises much, it delivers very little. Despite the galaxy of well-know theologians from across the denominational board the length of each essay produced (five to ten pages) prohibits any real engagement with its respective subject. The result is a volume that fails to do justice to the subject matter, Fackre, or the list of eminent contributors.