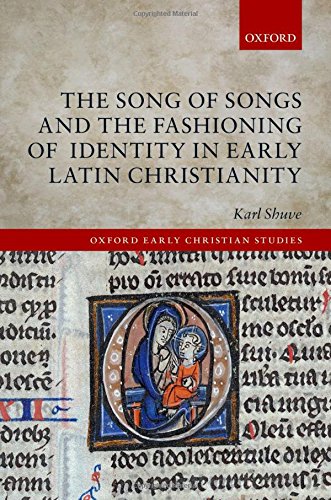 Modern exegetes and preachers typically treat the Song of Songs as a problem of one sort or another. Perhaps it is a problem of propriety: can I really preach that in front of a congregation ranging from preteens to grandmothers? Perhaps it is a problem of hermeneutics and the history of exegesis: what do I make of the seemingly fanciful exegesis of so many giants in the Christian tradition? Modern interpreters have treated the text largely within a historical frame, circumscribing its referents to the realm of the conjugal bed. And, owing to the varied problems attending its interpretation, many have tended not to make too much hay regarding this text. Some, following David M. Carr, have spoken of the recent fate of the Song as being functionally “decanonized” by modern exegesis (p. 5n15).

The exegesis and preaching of early Christians stands in stark relief to modern day experience. In this book, Karl Shuve examines the place of the Song of Songs in early Latin Christianity and the role it played in the Christian imagination (both regarding the communal and the individual identity). He does not focus largely upon commentaries on the text or other treatises that focus at length upon it. Rather, he looks to the way in which the text serves, by citation or allusion, as a baseline to help make sense of other texts or as a lens through which we might view different portions of Scripture. In other words, Shuve shows that early Christians viewed the Song of Songs not as a problem to be solved by other texts, but as a clear and pivotal portion of God’s Word through which we might better perceive the varied difficulties of the rest of the canon.

Shuve’s book is organized into two parts. Part 1 surveys the fate of the Song of Songs in North Africa and Spain, examining its role in the writings of Cyprian and the Donatists (ch. 1), in Pacian, Tyconius, and Augustine (ch. 2), and in Gregory of Elvira’s Tractatus de Epithalamio (ch. 3). Part 2 then turns to the role the Song played in Italy, focusing upon its place in the works of Ambrose (ch. 4–5) and then Jerome (ch. 6). In each case, Shuve looks to what he deems “patterns of citation of allusion,” a phraseology that is perhaps not defined clearly enough (with examples and counter-examples), but is nonetheless worth exploring as an avenue of appreciating the lineaments and architecture of patristic exegesis and early Christian imagination. One wonders if Shuve’s argument might not be furthered even more by considering early Christian liturgical allusion or citation to the Song, though such a possibility would involve a nest of difficult questions regarding text availability.

Readers might wish for further help contextualizing these notable yet selective soundings. For instance, Origen typically serves as a baseline (though not a fount, on which see pp. 2–3) to the more individualized and even ascetic reading. Origen famously claimed that the canonical order provides a pedagogical order for the wisdom writings: one must glean the practical wisdom of Proverbs, and then the vanity and insufficiency of this world through Ecclesiastes, before turning to the mystical bliss offered in the Song (see Origen’s “Prologue to the Commentary on the Song of Songs,” sec. 3). To what extent was this pedagogical and canonical argument shared, corrected, or ignored by those in his interpretive stream? That macro-hermeneutical question does not arise in this text. Similarly, medieval theologians regularly made a distinction between the propriety of illustrating a doctrine via allegory (knowing that it is taught elsewhere more plainly) and basing a doctrine upon an allegory. To what extent were such early scholastic distinctions present already in these patristic homilies and treatises? These two hermeneutical and methodological queries would enrich the value of this specific project, especially as they raise questions regarding Shuve’s concern to look wider than the typical Origenistic approach to Song exegesis and would provide a chance to compare and contrast Latin approaches to that Alexandrian model. A third area that could simply use more clarification would be the way in which the author at times speaks of asceticism and in other places of an “ascetic ideology” (especially in ch. 5); sometimes he can speak of one (e.g., Jovinian) who “was not opposed to specific ascetic practices, but rather to the ascetic ideology that privileged monastics over the married” (p. 201). I do not believe the text conflates these terms, but readers would be helped here by some preliminary work on definitions.

Even highly penetrating, well-argued historical analysis such as Shuve’s cannot be judged as if it were a constructive argument. Exegetical and hermeneutical arguments would need to be offered for or against the trends or specific strands of early Christian thinking, which are given such careful attention here. Historical excavation may offer a relief, however, from the tyranny of the present by helping to complicate our seeming necessities and clarifying their contingent shape. In this case, Shuve’s analysis helps demonstrate the varied pastoral concerns to which the Song may be addressed: either the care of the purity of the congregation (as in the line running from Cyprian through Augustine to Gregory of Elvira) or in the more individual and even ascetic discipline (such as that summoned forth in varied ways by Origen but especially by Ambrose and Jerome). Perhaps more significantly, his multi-faceted, yet beautifully interwoven sketch may suggest that the Song might be more of a hermeneutical lens than an interpretive problem: “for early Latin Christians, the Song was an explanans, not an explanandum . . . it was a key, not a lock” (p. 3).