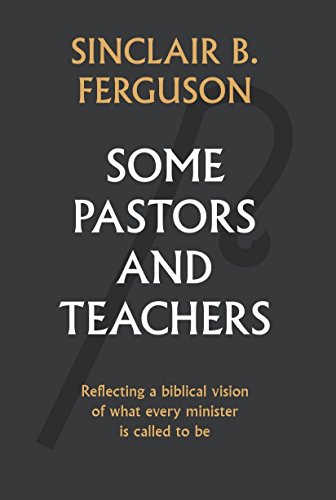 Some Pastors and Teachers: Reflecting a Biblical Vision of What Every Minister is Called to Be

Written by Sinclair B. Ferguson Reviewed By Justin L. McLendon
Ethics and Pastoralia

“While this is a big book,” says Sinclair Ferguson, “it only seems long! For each chapter is an entity on its own” (p. xiv, emphasis in original). The reason for this is that Some Pastors and Teachers is a collection of Ferguson’s essays written over his many years as both a pastor and an educator. Despite this, there is a consistent depth and breadth across its eight hundred pages. The book, therefore, a one-stop resource where Ferguson’s numerous chapters, articles, and essays are compiled and shaped into a volume directed specifically for those whom the Lord has called to the task of pastoral ministry.

Ferguson retired from pastoral ministry in 2013, having served for many years as Senior Minister of First Presbyterian Church in Columbia, South Carolina. Prior to this pastoral role, Ferguson held the Charles Krahe chair for Systematic Theology at Westminster Theological Seminary in Philadelphia. Over the years, he has written numerous books and articles, and he has held various roles with evangelical institutions and ministries in the United States and Scotland. Thus, if readers could hope for anyone to cull together a collection of essays to encourage, strengthen, correct, and form pastors for the work of ministry, then Ferguson’s reputation, faithfulness, and perspective qualify him to assist busy pastors in their ministerial tasks.

Spanning five expansive sections, the book introduces readers to three Johns whose ministries warrant inquiry. In the three chapters comprising this first section, Ferguson investigates John Calvin, John Owen, and John Murray. He helpfully shows how each of these three men held a high view of Scripture, were sound exegetes of texts, and were precise in biblical and theological reflection. From here, Ferguson spends the totality of section two, which comprises six chapters, on John Calvin. These chapters address Calvin’s piety, his pastoral ministry and theology. Noteworthy are two illuminating chapters on Calvin’s theology of the Holy Spirit. The section concludes with a crisp summary of Calvin’s perspective on the Lord’s Supper.

Section three turns the reader’s focus to the Puritans. John Owen receives the most attention in the nine chapters comprising this section. However, Ferguson’s chapter on John Flavel’s theology of providence sheds a welcome light on this lesser known Puritan whose contribution is spiritually rich and pastorally applicable. While Owen is rightly considered a theological giant, Ferguson appropriately presents Owen as a pastorally sensitive thinker.

Comprising thirteen chapters, section four casts a wide net in its focus on pastors and teaching. With introductory chapters on Scripture and inerrancy, to specific chapters on Reformed theology in general, Ferguson seeks to buttress his emphasis on the minister’s theological task. Perhaps the gem of section four is chapter twenty-two, “What is Biblical Theology?” (pp. 417–48). Even if one does not adhere to Ferguson’s method, one could easily conclude that this chapter provides an exceptional summary of the history, discipline, and extension of biblical theology. Pastors would be hard pressed to locate a more informative summary than the one Ferguson offers here.

Section five comprises eight chapters focused on the proclamation aspect of pastoral ministry. Some readers will quibble with Ferguson’s approach to “Preaching Christ from the Old Testament Scriptures” (chapter thirty-four), but his approach is consistent with his tradition. Chapter thirty-seven, “Preaching to the Heart,” addresses, among other things, the effective use of imagination in the homiletical task. Ferguson shows that preaching to the heart does not neglect or ignore the Holy Spirit’s work inner work among those hearing the Word preached; rather, preaching to the heart flows from sound exposition and an “imaginative creativity that bridges the distance between the truth of the word of God and the lives of those to whom they speak” (p. 728). Lastly, a brief epilogue follows section five.

While any Christian would profit from some or all of these essays, those who may need this wise counsel most are those whom the title addresses: pastors and teachers knee-deep in the overwhelming work of pastoral ministry. In this regard, four types of readers will strike gold in Ferguson’s book. First, those ministers who are now in their early years of ministry. These early years are formative ones whose lessons will linger for years to come. Portions of this book will help young pastors locate rock solid principles which help produce a trajectory of ministerial success. Each of the chapters on Calvin will prove beneficial for young preachers, but so too will later chapters such as “Exegetical Preaching” (chapter thirty-three) or “The Preacher as Theologian” (chapter thirty-five).

Second, there are a host of ministers who have been in ministry long enough that the good work of ministry grows tiring or cumbersome. In these seasons, there is a danger of one’s heart hardening or growing faint due to the moral and emotional complexities of daily ministry. For these ministers, Ferguson’s work will be a salve to their tired souls, in some ways interjecting a resolve to move forward in faithfulness. (See, for example, chapter ten, “Puritans: Ministers of the Word”). It is possible that some may doubt the import of Puritan theology and piety for contemporary ministry, but Ferguson shows his readers a pattern to their devotion, calling, and gospel ministry which transcends time. Ministers in this season can learn from the Puritans because, as Ferguson states, they had “the ability to unfold the mysteries of the gospel in a manner which reached into men’s hearts and touched their consciences—and all set within the context of a prayerful dependence on the Lord” (p. 169).

Third, for seasoned ministers who bear the joys and scars of long-term faithful ministry, this volume contains a goldmine of information urging them to finish well. Whether it is one of the early chapters where Ferguson’s focus targets a personality (Calvin, Owen, Murray, Flavel, etc.) or the section on Calvinistic singing in the epilogue entitled, “Doxology,” seasoned ministers will find fresh resources to renew their vows to end their service faithful to Christ and his church.

Fourth, those tasked with training the next generation of ministers, often working through various seminaries and divinity schools, will find in this resource a clarifying call to prepare ministers with a long arc of ministry faithfulness. Ferguson’s work will help teachers and seminarians reject faddish attempts to accomplish ministry in human strength and ingenuity. Additionally, seminary and divinity school professors need to be reminded about their main calling to train ministers to serve the local church (which is why the chapter on John Murray is especially helpful). Ferguson’s career in the church and academy give him the platform to speak to the academy on behalf of the church. In clever ways, this book helps those who are training future ministers to stay on task.

Beyond its practical use for the sorts of ministers listed above, Ferguson treats certain historical and systematic issues in succinct installments. The chapter on Sola Fide, for example, is both illuminating and instructive. As for criticisms, one could wish for more depth in some chapters, and one might wonder at times how any given chapter relates to those surrounding it. But these minor blemishes should in no way hinder readers from mining these chapters for lasting riches. Ferguson casts a big vision for pastors to hunger for God’s word, apply deep theological and practical truths to everyday ministry, and be concerned with a sort of piety and perspective which substantiates their calling. For these reasons alone, Ferguson’s book should be widely read.