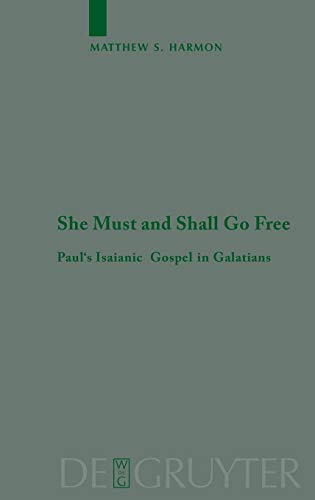 She Must and Shall Go Free: Paul’s Isaianic Gospel in Galatians

The present book is the published dissertation of Matthew Harmon, who is currently Professor of New Testament studies at Grace College and Theological Seminary. Harmon attempts to demonstrate the influence of Isaiah (primarily Isa 40-66) in each section of Paul's letter to the Galatians, and he offers many interesting suggestions along the way. By his own admission, Harmon notes that some suggestions of Isaianic influence will seem less plausible than others, but he intends to show that the cumulative effect of multiple areas of influence provides the necessary credence that Paul was addressing the Galatian crisis through Isaianic motifs and categories (p. 33).

Harmon begins with issues of prolegomena in ch. 1, overviewing studies on the use of the OT in the NT and more specifically on Paul's use of Isaiah. He aims to provide the first full-treatment of Isaianic influence on Galatians. Chapters 2-4 contain multiple examples of such influence followed by a final summary in ch. 5. For the present review I will be selective and note only the areas of influence that I found the most important and intriguing.

Chapter 2 focuses on Gal 1-2 with the most notable areas of influence stemming from Isa 49 and 53. In the opening chapters of Galatians, Paul appears to present himself as the Servant spoken of in Isa 49:1-6. He refers to himself as “a slave/servant of Christ” (δοῦλος; Gal 1:10). In Gal 1:15 he states that he was set apart before he was born and called by God in a manner that reflects Isa 49:1. He says in Gal 1:24 that the churches in Judea “glorified God because of me,” reflecting Isa 49:3. Lastly, he speaks of going to Jerusalem to discern if he “had run in vain,” which is likely language from Isa 49:4. These suggestions are quite fascinating for getting a glimpse into Paul's self-understanding. Additionally, these points take on greater significance in relation to the other main focus that Harmon sees in Gal 1-2: the influence of Isa 53 in Gal 1:4 and 2:20. In each instance, Jesus is presented as the Suffering Servant. The question then is how Paul can present himself and Jesus as the Servant of Isaiah. Harmon explains that the “bridge” is Gal 2:20 since Paul claims that he participates in the crucifixion of Christ and is indwelt by Christ (pp. 118-19). Thus, the mission of the Servant continues through Paul. I find this proposal very attractive, though I would add that suffering should not be left out from Paul's particular commission as the Servant since he presents himself in Galatians as one who suffers for Christ (Gal 3:1; 4:13-14; 5:11; 6:14, 17).

Chapter 3 argues that Paul's use of the Pentateuch in Gal 3-4 is based on a particular Isaianic reading of it. In fact, according to Harmon, it is at this point where Paul diverges from the agitators in the interpretation of the Pentateuch (p. 125). In Gal 3, Harmon detects multiple Isaianic influences including the parallels with Isa 53 in Gal 3:1, 10-14. Harmon rightly acknowledges the allusions and echoes to the exodus in Gal 4:1-7, yet he argues that these exodus motifs are influenced by Isaiah's expectation of a new exodus (end of exile). While this is possible, the main aspect of the Isaianic new exodus that would have contributed to the plausibility of Harmon's suggestion, “new creation,” is not present in this context. Harmon attempts to draw “new creation” into Gal 4:1-7 from 6:15, but this is not as convincing as Harmon suggests. Continuing on in Gal 4, Harmon addresses the notorious allegory of Gal 4:21-31. Here Harmon provides one of the best treatments on this text that I have come across. What was particularly satisfying for me was his explanation of the citation of Isa 54 in relation to the allegorical use of Genesis, noting that Hagar's husband—according to the citation of Isa 54—is the Law. Thus, Harmon demonstrates that the allegory fits nicely within Paul's overall argumentation against the Law's continuing function, showing that the Law produced no children for Sarah, who was barren until the coming of Christ, the true seed (p. 184).

Chapter 4 focuses on Isaianic influence in Gal 5-6, although Harmon admits that this section does not contain as many clear allusions and echoes as the first four chapters of Galatians. Following G. K. Beale, Harmon notes that the “fruit of the Spirit” discourse is largely dependent on Isaiah. In Gal 6:1-10, Harmon cannot find any allusions, echoes, or thematic parallels, but he argues that this section builds upon Paul's discussion on the “fruit of the Spirit” and so reflects the Isaianic influence there. Nearing the end of the epistle, Harmon notes that the reference to “new creation” in Gal 6:15 is Isaianic and argues that the term is comprehensive: anthropological, cosmological, and ecclesiological. Harmon provides good arguments for this broad interpretation, but the argument of Galatians taken as a whole, and the immediate context regarding circumcision, fits an anthropological reading better. The parallel between “new creation” and the Israel of God in Gal 6:16 likely broadens the referent to the corporate collective of believers, but the parts make up the whole (i.e., it is still anthropological), and thus I find Harmon's comprehensive interpretation unconvincing.

Chapter 5 summarizes the findings. Intriguingly, Harmon shows something of a narrative substructure from Isa 49-54 in Gal 1-4 as both speak of a Servant called before his birth to bring salvation to the Gentiles (pp. 250-54). Although Gal 5-6 departs from the pattern of Isa 49-54, Harmon suggests that this is because Gal 5-6 spells out for the Galatian situation what has been argued previously (p. 254). So he concludes that the function is similar in the relationship between Isa 49-54 and 55-66.

Overall, Harmon's book is an exciting and informative read. His explanations are insightful, and he includes many helpful charts comparing the MT and LXX of Isaiah with Pauline texts. Although a few of Harmon's suggestions are not fully convincing to me, he succeeds in demonstrating how impactful Isaiah was for Paul as he wrote his letter to the Galatians. She Must and Shall Go Free is a must-read for those serious about Galatians and Paul's use of the OT.