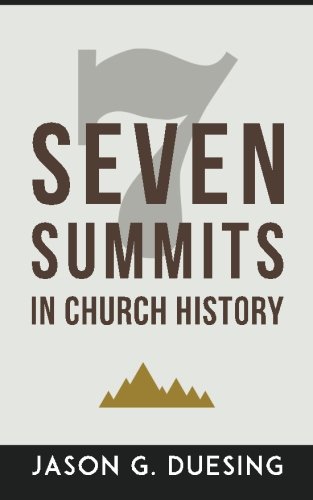 Despite the fact that there is still widespread ignorance of the history of God’s people among far too many local churches, only a die-hard pessimist would view the current scene of interest in the Christian past with profound discouragement. We are seeing the production of some fabulous historical scholarship by relatively recent doctoral graduates as well as a flurry of works for a more general popular audience. This new book by Jason Duesing, Provost of Midwestern Baptist Theological Seminary, falls into the latter category and seeks to introduce readers to seven key figures—“seven summits” to use Duesing’s mountaineering image—in the history of the church. Five of them are no surprise—Augustine, Martin Luther, John Calvin, Jonathan Edwards, and William Carey. These are obvious giants. The other two—Balthasar Hubmaier and Carl F. H. Henry—are more idiosyncratic to Duesing’s own faith journey and his Baptist convictions. But as he rightly stresses, Hubmaier, as the doyen of 16th century Anabaptist theologians, has much to teach contemporary western believers whose world is one where religious liberty is increasingly being challenged (pp. 71−72, 78−79). And as Duesing notes, Henry’s firm commitment to the authority of God’s Word stands behind the remarkable ministry of Billy Graham (pp. 107, 114). Given that both religious liberty and biblical authority are critical issues of our day, Duesing has good reason for including these two lesser known figures.

Duesing’s chapter on William Carey (p. 93−105) is typical of his treatment of each of these seven figures. After indicating Carey’s importance—he “changed the modern world” and his An Enquiry into the Obligations of Christians, to Use Means for the Conversion of the Heathens (1792) is a landmark book in the history of the Church—Duesing tracks through Carey’s life with some lengthy extracts of his writings to give readers an idea of Carey’s radical commitment to missions. Notably, Duesing does not shy away from discussing one key problem area of Carey’s life—the collapse of his wife Dorothy into insanity. Backing up this substantial overview is Duesing’s awareness of the latest Carey scholarship, reflected both in the footnotes and the recommended reading at the close of the chapter. A quote from one of Carey’s co-workers, John Fountain, helps Duesing summarize Carey’s life: “He keeps the grand end in view.”

An opening chapter and conclusion defend the importance of learning church history through biography. This is an excellent tool for the novice to the history of Christianity and also a great reminder for more advanced students that God changes history through people.

Michael A. G. Haykin is Principal and Professor of Church History and Reformed Spirituality, at the Toronto Baptist Seminary, Toronto, Ontario.