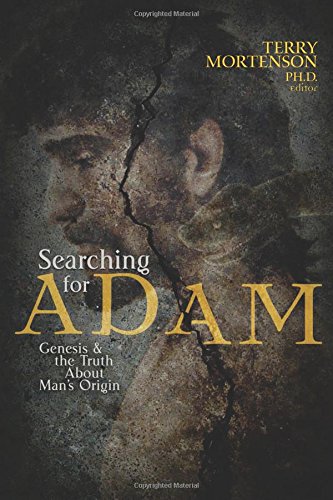 Searching for Adam: Genesis and the Truth about Man’s Origin

The current evangelical debate over the historical Adam has been going for nearly a decade. Early and mostly academic discussions came to the attention of the wider public in 2011 through a feature article in Christianity Today and a subsequent story on National Public Radio. Since then, a steady stream of books and articles have appeared to address the case for and against the historical Adam and his theological importance. This recent entry, Searching for Adam: Genesis and the Truth about Man’s Origin, edited by Terry Mortenson, weighs in on the debate from the young-age creationist perspective.

The book consists of an introduction and sixteen chapters written by sixteen contributors, six of which are formally affiliated with Answers in Genesis, the world’s largest creationist organization. Authors such as Stuart Burgess, Jerry Bergman, and Marvin Lubenow will be familiar to anyone already acquainted with young-age creationism. Eugene Merrill also contributed a chapter titled, “‘Where are you, Adam?’ The Disappearance of Adam and the Death of Truth.” Authors that might be new to readers include David Casas (president, Berea School of Ministry) writing on the Image of God, David Croteau and Michael Naylor (faculty at Columbia International University) writing on Adam in the New Testament, and Steve Ham (senior director for international outreach at AIG and brother of Ken Ham) writing a response to John Walton.

The range of topics in the chapters is appropriately broad, with seven chapters on the Bible and theology, five chapters addressing science, and four chapters on cultural issues. Mortenson’s introduction sets the agenda for the rest of the chapters, to “show that not only is belief in a literal Adam and Fall consistent with historic Christian orthodoxy and sound biblical exegesis, but it also is powerfully confirmed by many lines of solid scientific evidence” (p. 15).

The book presents a standard view of the creationist position on the historical Adam. Readers will encounter “origins science” vs. “operation science” (pp. 10–13), the humanity of Neandertals (chapter 9), the amazing design of the human body (chapter 11–12), the negative cultural consequences of evolution (chapters 13 and 16), and the critical importance of the historical Adam for Christian theology (throughout the book). In this respect, the book provides a helpful packaging of existing ideas, even though some of the chapters have deficiencies.

One such deficiency is an overreliance on anecdotal evidence. Tom Nettles’s chapter, “Adam’s Place in the History of the Church’s Theology,” presents anecdotal evidence supporting the historical Adam from throughout church history but without significant discussion of alternative ideas on Adam from the history of the church. Consequently, we cannot tell how prevalent (and therefore important) the historical Fall really was. Likewise, Bergman’s chapter “Evolution, Racism, and the Scientific Vindication of Genesis” presents copious anecdotes documenting racists’ use of Darwinian thinking. However, Bergman’s chapter does not discuss Christian advocacy of eugenics, anti-evolutionist racists, or pre-Darwinian anthropological racism, all of which would complicate his portrayal of Darwinian thinking as a primary cause of racism.

Other chapters omit important, relevant details. Burgess’s two chapters on the differences between human and ape anatomy focus almost exclusively on extant creatures. He concludes that evolution cannot explain the origin of uniquely human anatomy, but how can the reader evaluate the evidence fairly when the fossil record is barely mentioned? Similarly, Landis’s chapter on the ingenuity of ancient people concludes, “Ancient man was not a grunting ape-man gradually changing into Homo sapiens over millions of years” (p. 443), but he presents only anecdotes about Homo sapiens. He does not discuss the culture and stone tools of Neandertals, Homo erectus, or any other hominins. How can the reader judge the adequacy of Landis’s evidence as a response to evolution when the purported evidence of evolution is omitted?

Despite these shortcomings, at least three chapters stand out as particularly useful contributions to the historical Adam debate. Interestingly, all three come from relatively new authors to the world of young-age creationism. First, Croteau and Naylor’s “The Question of a Historical Adam: A New Testament Perspective” presents a helpful discussion of the pertinent cultural and scriptural evidence. They open with a brief discussion of first century extra-biblical literature, emphasizing nonhistorical interpretations of Adam that were available to the NT authors. They conclude that Paul was not merely following cultural convention by treating Adam as historical since there were other possible interpretations available to him. After extensively discussing Paul, they address a number of indirect references to Adam that are sometimes overlooked. Unsurprisingly, they find the historical sense to be the best interpretation of each.

The second outstanding chapter is Steve Ham’s thoughtful discussion of John Walton’s functional and archetypal views of Genesis 1–3. Ham critically evaluates and engages familiar counterarguments to Walton’s claims, but he develops additional, important points. He notes that Walton’s exclusively functional view of creation denies the very perspicuity that Walton claims to accept. Further, he notes several of Walton’s idiosyncrasies, such as the strawman assumption that the inheritance of original sin must be genetically based or Walton’s inordinate attention to human evolution despite claiming that it has no bearing on his exegesis. Ham’s chapter is a worthwhile discussion of Walton’s novel interpretations of Genesis.

Perhaps most striking of all, however, is chapter 10, “Genetics Confirms the Recent, Supernatural Creation of Adam and Eve,” by Nathaniel Jeanson and Jeffrey Tomkins, which is extremely well written and clearly argued. The chapter opens with an anecdote from Jeanson’s education which sets the terms of the analysis that follows. Jeanson explains three types of experiments, as first explained to him by one of his professors. Type 1 experiments distinguish between models when one predicts one thing and the other predicts the opposite. Type 2 experiments test only one model but say nothing about the other. Type 3 do not compare models at all. Unquestionably, Type 1 experiments should be preferred when one is trying to select between competing models.

The authors then follow carefully through with their analysis on those terms. Procedural details are left to their 93 footnotes, but there is no mistaking the overarching thought process that guides their work. Perhaps most importantly, they emphasize the need to carefully construct arguments and experiments so that they can actually distinguish between competing models. Jeanson and Tomkins’s chapter is extremely helpful as a summary of their views and research.

Furthermore, Jeanson and Tomkins approach their work as if an entire model should be rejected based on a handful of experiments. Scientists rarely do this, however, since models resemble miniature paradigms, joining disparate theories and observations in a single explanatory framework that manifests a consilience of induction. When presented with anomalous or contradictory data, scientists will modify their models rather than discard them altogether. If one model cannot explain a piece of data while a competing model can, scientists prefer the model that can explain the most data. Thus, readers might wonder why Jeanson and Tomkins seem satisfied that their model “does not make specific predictions about human-ape genetic differences” (p. 294), when that would be viewed as a deficiency in need of further development.

One must also remember that comparing models is only profitable if models have been comprehensively sampled. If modern human evolution and Jeanson and Tomkins’s model of human origins are wrong (or in need of significant revision), it is unclear how their preferred experimental procedure could address this.

Much more could be written about each chapter, but these major themes illustrate the main advantages and disadvantages of Searching for Adam. The book contains unquestionably helpful essays that genuinely clarify positions and challenge arguments. Other chapters fall short for reasons discussed previously. The book is unlikely to convince anyone not already convinced of AIG’s position that theology and science support a historical Adam, since the ideological positions of the creation/evolution combatants are so firmly entrenched. That is a shame, because this book ought not be so lightly dismissed.