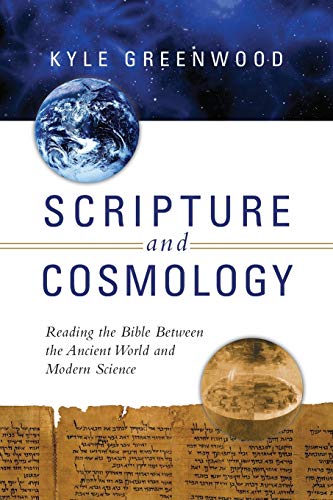 Scripture and Cosmology: Reading the Bible Between the Ancient World and Modern Science

Although the Old Testament was indeed written for us, as John Walton notes, it was not written to us originally—rather, it was written first to ancient Israel and then through Israel to us (The Lost World of Genesis One [Downers Grove, IL: InterVarsity Press, 2009], 9). Sound historical-grammatical exegesis, then, calls for the study of the original audience’s context, in this case, the ancient Near Eastern context of Israel. In Scripture and Cosmology, Kyle Greenwood, associate professor of Old Testament and Hebrew at Colorado Christian University, provides a popular-level resource for better appreciating biblical cosmology within the OT’s cultural context, and for grappling with the difficult questions that arise in relation to contemporary science.

The book is divided into three parts. In the first, Greenwood surveys ANE cosmologies and then rehearses the same topic in Scripture, suggesting with proper nuance that there is a generally similar portrayal of the cosmos as a three-tiered structure: heavens, earth, and sea. Part two reviews the history of the church’s efforts to understand Scripture in light of ever-developing scientific knowledge about the world, relating how leading theologians—from Basil, Chrysostom, Augustine to Aquinas, Luther, and Calvin, as well as touching on Jewish interpreters like Philo and Maimonides—struggled to interpret Scripture amidst the prevailing cosmologies of Aristotle and Copernicus in turn. The last part of his book is devoted to questions about the authority of Scripture, given its perceived scientific inaccuracies, and promotes the doctrine of divine accommodation; that is, God has graciously adapted revelation to his people’s level of understanding in a manner similar to a father’s adjustment when talking to his young children.

Inevitably, questions remain after reading a concise work on this controversial topic. Firstly, how does one discern the line between language that is deliberately analogical and phenomenological on the one hand, and language that exemplifies a faulty science about the physical universe on the other hand? Did the ancient Israelite really believe there were physical latticed windows in the firmament (Gen 7:11; 8:2)? Was the “foundation” (from the verbal root יסד) of the earth (Job 38:4) understood any differently than the description of the Lord’s testimonies, which were “founded” (also from יסד) of old (Ps 119:152)? While the term “analogy” and the like are interspersed throughout the book (e.g., pp. 71, 78–79, 194) to describe the Bible’s language about the cosmos, the discussion at times appears to assume that Israelites employed such descriptions in a literal or material (rather than analogical) manner. To take a NT example, it is doubtful that the apostle Paul, though he used a three-tiered cosmos reference in Philippians 2:10, expected he could dig his way into Sheol in the first century AD any more than Dante thought so in the early fourteenth century. Moreover, at least with some of the Scripture passages utilized—such as Satan’s “going to and fro” on the earth (Job 1:7) said to assume “an earth that the Satan can cover completely by foot,” comporting with a “small, round disk supported by pillars” (p. 74), and Daniel’s interpretation of Nebuchadnezzar’s dream (Dan 4:10–11) said to rely on “a small, flat earth” (pp. 75–76)—one wonders if we are taking literally language that was meant to be understood figuratively. Though Greenwood’s case for a three-tiered portrayal of the cosmos in Scripture is clear, some discussion on genre, poetry, and idiomatic language would be helpful on some of these proof texts.

Secondly, to what degree is accommodation a matter of navigating the tension between an audience’s limited understanding versus their misunderstanding? Greenwood builds upon the work of Kenton Sparks (God’s Words in Human Words [Grand Rapids: Baker, 2008]) for his explanation of accommodation (p. 194). Sparks in turn had utilized the work of Peter Enns (Inspiration and Incarnation [Grand Rapids: Baker, 2005]), whom Greenwood also references (pp. 72, 202). While these authors, including Greenwood, appeal to Calvin for his own employment of accommodation (pp. 175, 200–201), Calvin seems to use phenomenology to evade accusations of faulty science, urging rather the former’s compatibility with (and, sometimes, irrelevance to) contemporary scientific discoveries (see his discussion on firmament in Commentaries on the First Book of Moses Called Genesis, trans. J. King [Grand Rapids: Baker, 1979], 79–81). By contrast, the accommodation espoused by Sparks and Enns includes human errors and evils. Since divine accommodation encompasses a variety of views, readers would be served by greater clarity and distinction on this point.

Finally, is it possible the three-tiered cosmos is used purposefully in a theological, mythic, or cultic sense—and, if so, what then gets lost when biblical cosmology is dismissed? In this regard, one may refer to Walton’s treatment of the Bible’s cultic or temple theology in propositions 7, 8, and 9 of The Lost World of Genesis One (see also Mark S. Smith, The Priestly Vision of Genesis 1 [Minneapolis: Fortress, 2010]). While Greenwood does note sanctuary imagery in discussing some texts (pp. 78, 111–12), this point is incidental to his focus and, therefore, not noted in the actual summaries of his first section. In our estimation, however, this insight should be pressed further in relation to its theological implications, such as—to note merely one example—humanity’s priestly nature, created to worship and dwell with God. Scripture portrays the three-tiered structure of the cosmos as a particular sort of house: a temple. The theology of this cosmic temple develops from Genesis to Revelation and serves as the context for NT arguments concerning the person and work of Jesus Christ (see John 1:14; Heb 9:24). Intrinsic to this point is an important facet for understanding biblical accommodation, namely, that the Lord God did not have his hands tied (to use an anthropomorphism!) with regard to revelation, but sovereignly determined and ordained the very cultural context which he, in his infinite wisdom, deemed paramount for delivering his eternal Word. Rather than explaining it away with a blush or literalizing it into sterile science, cultic cosmology should therefore be studied and enjoyed for its theological profundity and beauty. Happily, Greenwood’s work avoids these pitfalls, but a more robust exposition of the theological upshots of understanding the cosmos as a temple would have furthered his pastoral aims in the third section.

With good success, Greenwood has pursued the difficult task of addressing a topic from a multidisciplinary approach, so that Scripture and Cosmology forms something of an entry-level primer on the subject, reader-friendly both in terms of style and its condensed length. Admittedly, the relationship between science and Scripture is fraught with controversy, discussions often marked by heated polemics and uninformed assertion, and entry into the fray is done typically at one’s peril. While, therefore, some readers may not agree with certain arguments or conclusions set forth in this work, Greenwood is nevertheless to be thanked for engaging and contributing to the issue in an exemplary thoughtful and irenic fashion. Also laudable is that the book is written with a high view of Scripture, reverently concerned that more care be taken to discern what the Scriptures actually teach and do not teach—lest faulty science be asserted which brings Scripture into ill repute, while straining the faith of the less-seasoned among God’s people. Greenwood’s tone is winsome and pastoral; rather than writing to refute the Bible’s gainsayers, he has endeavored to help the challenged believer. Though not referenced in Scripture and Cosmology, such readers will also profit from G.K. Beale’s The Erosion of Inerrancy in Evangelicalism (Wheaton: Crossway, 2008), which has two chapters titled “Can Old Testament Cosmology Be Reconciled with Modern Scientific Cosmology?”