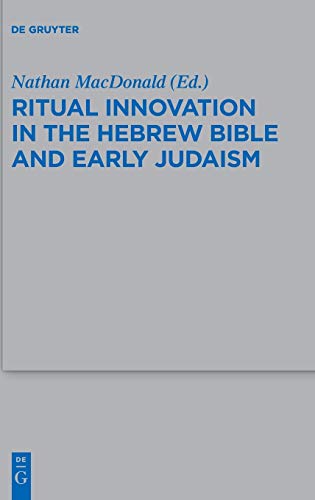 Ritual Innovation in the Hebrew Bible and Early Judaism

Ritual theory for the cult of Israel is a complex area of study, especially since its foundation must be textual, relying on the accounts of ritual in the Hebrew Bible, which are embedded within a narrative framework. Moreover, the variety of opinions in scholarship about “priestly” material, whereby ritual accounts reflect either practices of the greatest antiquity or the late innovations of a post-exilic priestly class, convolute the subject further. Why are rituals placed within narrative texts to begin with? What is their function—are they meant to be descriptive, preserving ritual instructions for continued use, or are they literary compositions sponsoring theological constructs? Needless to so say, one’s view of the nature and development of Israelite religion is reciprocally related to these questions, as exemplified by Julius Wellhausen’s documentary hypothesis. Ritual Innovation in the Hebrew Bible and Early Judaism, edited by Nathan MacDonald and comprised mostly of papers given for a special unit of the same name at the 2013 Society of Biblical Literature international meeting in St. Andrews, engages diverse issues related particularly to “innovations” in ritual practice.

After MacDonald’s general introduction to the topic of ritual innovation, providing an orientation for the essays that follow, Saul M. Olyan (“Two Types of Ritual Innovation for Profit”) examines passages that condemn ritual innovation, such as King Uzziah’s attempt to present the incense offering in the Jerusalem temple (2 Chron 26:16–21), as well as accounts where changes in ritual are not challenged. Regarding the former, Olyan offers a standard critical reading: representations of condemned ritual innovations serve to guard priestly structures of power. In relation to unchallenged ritual changes, not all readers will agree that Olyan’s examples are relevant as rituals (2 Sam 10:1–5; 16:11; Neh 13:25)—he refers to them as “conventional rites” (15).

James W. Watts (“From Ark of the Covenant to Torah Scroll: Ritualizing Israel’s Iconic Texts”) argues that, even though the ark of the covenant did not exist at the time of the Pentateuch’s final shaping, the Pentateuch describes this ritual object in elaborate detail to lay the basis for Torah scrolls to replace the ark of the covenant as the iconic focus of worship. This innovation, “disguised” as continuity, stems from high priests in Jerusalem who “rode the rising prestige of both temple and Torah to unprecedented heights of religious and political influence” (pp. 33–34).

Reinhard Achenbach (“The Empty Throne and the Empty Sanctuary: From Aniconism to the Invisibility of God in Second Temple Theology”) traces the theological development of the presence of YHWH in ancient Israel, arguing for a process of spiritualization, abstraction, and human interiority. In the post-exilic period, for example, purification is described as circumcision of the heart (Deut 10:16), and in the so-called Elohistic Psalter, Elohim replaces the divine name YHWH. Achenbach’s presentation involves speculative historical reconstruction, aside from being built upon a dating of the biblical material which can no longer be assumed as a consensus.

Nathan MacDonald’s essay (“Ritual Innovation and Shavu‘ot”) traces the history of the Feast of Weeks through the different festival calendars, studying the dynamics of ritual innovation through five texts: the Covenant Code’s “Feast of Harvest” (Exod 23:18); the book of Deuteronomy, which first uses the designation “Weeks” and restricts the Israelite cult to a single place (16:9–12); the Holiness Code, for which the occasion is no longer a “pilgrimage festival” but a “day” (Lev 23:9–22); the covenant prescriptions following the Golden Calf incident, which depend on both Exod 23 and Deut 16 (Exod 34:22); and the Temple Scroll, which multiplies firstfruits festivals (11QT 18:1–23:01).

In “How the Priestly Sabbaths Work: Innovation in Pentateuchal Priestly Ritual,” Jeffrey Stackert explores the divergent views of the Sabbath from what he presumes to be the Pentateuch’s two major Priestly strata, the Priestly Source (P) and the Holiness Writings (H). For P, the Sabbath functions much like circumcision, as a reminder to God, and this with a view to agricultural blessing, while H understands the Sabbath rather as a sign for God’s people, prompting Israel to reverence YHWH, observing his commandments to achieve their holiness. With some recent studies tending to see the coherence of the Holiness material within the overall logic and comprehensive worldview of the cult (see pp. 185–220 of my Who Shall Ascend the Mountain of the Lord? [Downers Grove, IL: InterVarsity Press, 2015]), it becomes likely that sharp distinction between P and H amounts to splitting into two separate coins what are rather two sides of one. Of course, not all scholars assume the existence of a “Holiness School” (see Frevel’s comment in this volume, p. 131).

Roy E. Gane’s essay, “Innovation in the Suspected Adulteress Ritual (Num 5:11–31),” sets forth the purpose of the highly unusual ritual in question as benefiting a suspected but innocent woman by persuading her husband not to reject her. The main innovation of the ritual is its holy water “litmus test,” based upon the dynamics of holiness versus impurity. Gane argues convincingly that this passage assumes and builds upon concepts of moral impurity and holiness from the holiness section of Leviticus (18:20).

Christian Frevel (“Practicing Rituals in a Textual World: Ritual and Innovation in the Book of Numbers”) offers a thorough analysis of the use of Lev 5 in Num 5–6. Filled with brilliant insights, Frevel’s essay demonstrates that these Numbers passages, rather than randomly placed due to the closure of the book of Leviticus (where it is sometimes deemed they actually belong), are well-suited in their current location with regard to content, spatial conceptions, and their function within the larger context of Numbers.

In “Walking over the Dead: Burial Practices and the Possibility of Ritual Innovation at Qumran,” Ian Werrett, contrary to popular and widespread assumption, argues that the burial practices at Qumran do not betray the sect’s distinctive notions about ritual impurity. Werrett marshals archaeological evidence from other cemeteries in the region to show that Qumran’s shaft-style burials were not unique.

As with most collections of essays, Ritual Innovation presents a diverse set of approaches and topics (even if generally connected to the idea of changes in ritual). Several of the papers are marked by the circularity intrinsic to source criticism, not to mention a hermeneutic particularly suspicious of post-exilic priests. Moreover, the notion that some of these ritual innovations were subtle enough to have been cleverly disguised from the original audience, may well lead one to wonder if the assured findings of modern scholars who claim to have untangled innovative aspects are somewhat overly clever themselves. Those remarks aside, several essays contribute toward understanding either the biblical text or ritual theory, and the disagreements that inevitably surface nevertheless foster helpful reflection on the subject matter.