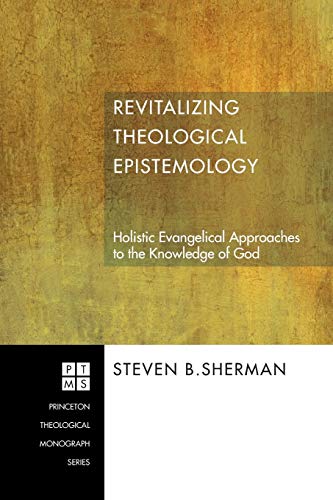 Steven B. Sherman is a thoughtful proponent of postconservative evangelicalism. He is among a growing number of particularly younger evangelical scholars who are insisting that the enduring integrity of evangelicalism’s contemporary witness depends upon revising—if not completely rejecting—the approach to theological knowledge that is characteristic of those in the mainstream of what he calls “Enlightenment-enchanted evangelicalism” (p. 132). His study—which is well-organized, generally well-written, and more often than not quite accessible—is a forthright call for evangelicals to reconstruct evangelical theology for the twenty-first century by embracing models of knowing that are grounded in the nonfoundationalism of “the postmodern cultural condition” (p. 3). As such, Revitalizing Theological Epistemology is a constructive proposal that “is about contemporary evangelical approaches to the knowledge of God, considering—and suggesting—ways Christian philosophers and theologians [should] envision and make use of theological knowledge in the postmodern context” (p. xv).

At the heart of Sherman’s call for a revitalized theological epistemology is his insistence that conservative evangelicals “regularly” conceive of theological knowledge in ways that “privilege” the rationalism of the Enlightenment (p. 128). According to Sherman,

Mainstream conservative evangelical theology in the modern period has traditionally approached epistemological questions with definitive—and allegedly indubitable—answers generally based on a modern foundationalist method of biblical interpretation: a system characterized by an unwavering belief in the ability of reason and evidence … to provide the church and the world with certain knowledge and truth. (p. 16)

Because he is persuaded that such an approach to the knowledge of God is “practically obsolete” (p. 92) due to the “downfall of modernity’s premier epistemology—foundationalism” (pp. 68–69), Sherman argues that in order to move “the unchanging gospel forward via the changing garb of new historical and cultural contexts” (p. 265), evangelicals must shed the “approach to knowledge” (p. 16) that is grounded in what postconservatives regard as the epistemological hubris of the modern era and embrace instead “more holistic approache[s] to theology and epistemology” (pp. 1–2). Indeed, they must abandon the “extreme focus on objectivity and scientific method” (p. 2) that is characteristic of more “traditionalist” approaches to the knowledge of God and focus instead on “alternative philosophical and theological resources for evangelical thought” (p. 8), including those that move beyond a “modernity-immersed” (p. 100) conception of knowledge by allowing a greater role “for scripture, experience, wisdom, community, and mystery in epistemological matters than conservative evangelical theologians traditionally have permitted” (p. 255). Such an incorporation of “other ways of knowing” (p. 254) will encourage the revitalization of theological epistemology, Sherman concludes, for reducing reason to “one among [many] relatively equal resources” (p. 254), for the knowledge of God “will force evangelical intellectuals beyond the comforts of the familiar territory marked out by modernity: traditionalism, modernist-fundamentalist categories, foundationalism, ahistoricism, aculturalism, acontextualism, propositionalism, triumphalism, objectivism, ethnocentrism, certainty, hubris, et al.” (p. 270). It will also engender a refreshing and healthy ecumenism, for it will foster the recovery of those “premodern ways of knowing [that are typically] associated with ancient, classical, and medieval expressions of Christian faith” (p. 250).

While Sherman’s analysis of the Princeton Theology is particularly helpful because it outlines the postconservative case against Old Princeton and conservative evangelicalism more generally, nevertheless, it is seriously compromised by the presumption that the Princetonians were more or less oblivious to the holistic nature of theological epistemology. Not only does Sherman presume that the Princetonians were thoroughgoing rationalists, but even more remarkably he suggests that they were “classical” foundationalists (cf. p. xiv n. 3) who presumed that their thinking—and their thinking alone—was neutral and without bias (cf. p. 93). But what if the Princetonians really weren’t the committed rationalists that Sherman and others presume them to be? In other words, what becomes of Sherman’s thesis—let alone the justification for the entire postconservative project—if the theologians that he regards as “representative of the general purview of traditionalist viewpoints” (p. 91) really weren’t as indebted to an Enlightenment conception “of what it is to be human, to know, and to believe” (p. 100) as he makes them out to be? Postconservatives should consider these and other important questions with greater diligence, I would respectfully suggest, before they offer proposals that presume to solve problems that are more imagined than real.