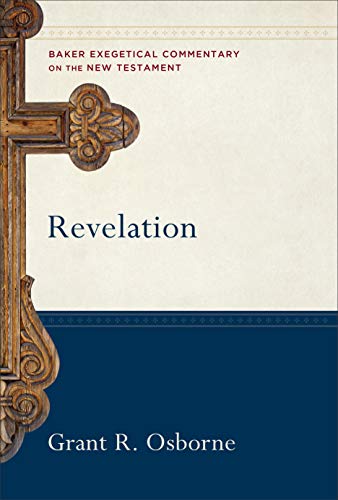 The appearance of Osborne’s commentary on the Book of Revelation is the latest addition to the Baker Exegetical Commentary series. The series has already seen the appearance of the two-volume work on Luke by Darrell L. Bock, and the volume on Romans by Thomas R. Schreiner. With almost a decade since the first edition of Bock’s Luke was published, the series is slow to appear, but its appearance is welcomed nonetheless.

This contribution from the Professor of New Testament at Trinity Evangelical Divinity School shows the same hallmarks as the earlier volumes: a thorough and comprehensive engagement with the original text, a highlighted summary and introduction to each block of material, a verse-by-verse exegesis and exposition, a further highlighted summary and ‘contextualisation’, which seeks to draw out practical and relevant points of application, and, in most cases, additional notes on the Greek text.

Osborne identifies four primary problems in the interpretation of Revelation: the book’s symbolism, its structure, the debate over historicist/preterist/idealist/futurist interpretations and the use of the OT. The basic position taken in this commentary is that the book is both preterist and futurist, with a message for John’s immediate readers, and a message for the future. As a basic premise for the interpretation of all biblical prophecy, this is undoubtedly correct. Osborne’s introduction calls for a definitive work on the use of the OT in Revelation, and argues that typology, rather than any individual OT book, is the key to interpretation.

The introduction deals with issues of authorship, date and provenance, as well as looking at the peculiar difficulties of Revelation, in connection with apocalyptic genre, methods of interpretation, use of numbers and symbols, for example. It is rounded off with a discussion of the theology of Revelation, highlighting the themes of God, messianic war, theodicy, perseverance and worship.

It would be invidious to single out issues for comment, but two observations may be relevant. First, it seems to me that the theme of ‘counterfeiting’, cogently presented by Vern Poythress in his The Returning King, deserves more acknowledgement. Osborne hardly mentions it, yet it is a major theme in Revelation. The parallels between the power of Christ and the power of Satan (for example, the mark of the Beast counterfeiting the sealing of the saints) highlights the theme of spiritual war which runs throughout the Book.

Second, on the theme of the millennium, Osborne is correct to lament how Revelation 20:1–10 has sorely divided Christians. He takes a premillennial interpretation of the passage, but acknowledges the viability of other interpretations. One of the main problems with premillennialism, it seems to me, is its insistence on taking the thousand years literally, even although Osborne states it as a guiding principle that ‘the numbers in the book are meant symbolically, as was common in ancient apocalypses’ (17). That is undoubtedly true; why, then, should the thousand years of Revelation 20 not be interpreted symbolically also?

These are minor points of interest in a work that is an important exegetical tool. Together with recent volumes on Revelation by Greg Beale and Simon Kistemaker, Revelation studies are well served at present. The three commentaries together provide a staggering 2748 pages of exposition of Revelation. One wonders what John’s intended readership would have made of all this; but for a modern readership, and not least for preachers of the Word, these volumes will shed light on what is, in many ways, such a mysterious work. It is ironic that that is the case, though, given that the closing book of the canon is meant to be a revelation!