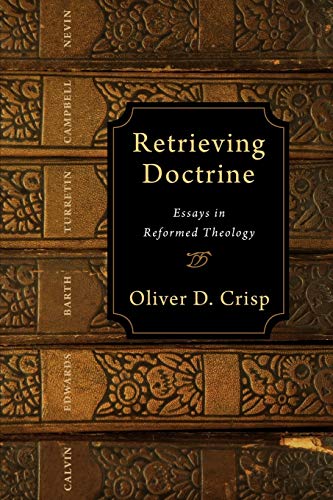 Retrieving Doctrine is a collection of new and previously published essays that approaches nine core topics of the Reformed tradition through six of its most significant contributors: Calvin, Barth, Edwards, Turretin, Campbell, and Nevin. Taken together, these essays span the critical theological junctures of the tradition. Additionally, Crisp addresses the sometimes thorny problems through the lens of Analytic Theology (See “On Analytic Theology,” in Analytic Theology [eds. Crisp and Rea; Oxford University Press, 2009]). Retrieving Doctrine, then, acts as the first book-length venture to explore what Analytic Theology would look like from a specifically Reformed perspective.

Crisp treats his sources honorably. He gives them every benefit of the doubt and taking them at their word, even when flat contradiction appears unavoidable.

Because Retrieving Doctrine is an anthology of essays, I can give only a terse sketch of the chapters here. Part I, “Creation and Providence,” contains two essays: one on Calvin and the other on Barth. This enjoyable pairing showcases Crisp's ability to engage the sources historically and critically, while commending what is most appreciable from each. These two chapters contain the least amount of “analytic” method as compared to the ensuing essays. Chapter one brings diverse views such as Sally MacFague, Open Theology, occasionalism, and even Bruce McCormack's Christology into conversation with Calvin while simultaneously maintaining a sensitivity to Calvin's theological circumspection. Chapter two focuses on Barth's general commensurability with the Reformed tradition in relationship to his theological employment of creation. These two chapters make for enjoyable reading.

Part II, “Sin and Salvation,” begins with nuanced corrective regarding Jonathan Edwards's view of imputation (ch. 3), ferreting out the significance of mediate and immediate federalism for the uninitiated reader of Edwards. This is logically followed by Turretin's argument for the (philosophical) necessity of the Incarnation (ch. 4). Chapter five introduces the reader to John McLeod Campbell's shift of emphasis away from classical penal substitution and the theological implications of such a move. Most scandalously for theology nerds, Crisp takes on Barth's alleged universalism (ch. 6) in the most uncomplicated way, not allowing Barth's veiled and impenetrable statements to act as the definition of his own theological positions. Most readers will either react with “That's what I always thought!” or “He is pigeon-holing Barth!”-either way, the punctuation will most likely remain the same.

Part III, “The Christian Life,” begins with an essay on Calvin and prayer. Specifically, what theological justification can Calvin hold for impetration (entreatied prayer) that corresponds to a consistent view of divine sovereignty and makes sense of the Scripture's report of prayer (ch. 7)? Chapter eight offers a perspicacious account of John Williamson Nevin's view of the “organic nature of the church.” Reviving Nevin's thought, this chapter will challenge any reader to rethink previously held views of the church's nature and function. This chapter on Nevin is well-placed at the end of the book where it ties together many of the recurring themes highlighted thus far (e.g., the Fall, imputation, the Incarnation, atonement, etc.). In the final essay, Edwards's consistency with regard to fencing the Lord's table is given a historical and metaphysical context as it is juxtaposed to Salomon Stoddard's “Half Way Covenant” view of Communion (ch. 9). While Part III is not practical theology per se, these chapters certainly bring readers into conversation with Reformed theologians, including Crisp himself, who aid inasmuch as they force our categories and require a re-contextualization of our own theology.

Having kept an eye on the Analytic Theology movement over the past few years, I've been very interested to see what kinds of theological works it would produce. Although some concerns still linger, Crisp has allayed my apprehensiveness that theology, for the analytic theologian, might become a reductive enterprise aimed at merely mathematical precision. Crisp is clearly a sensitive reader and aware of the constraints of the task. As he notes in Analytic Theology, a strong objection to that style of theology is that it might be “ahistorical and does not pay sufficient attention to the social and cultural factors that shape Christian doctrine (p. 50).” Retrieving Doctrine escapes this criticism entirely. Because Crisp shapes the discussion of these theologians through a historically-sensitive and honorably exegetical lens, the essays are both propaedeutic and insightful. As a reader, I felt challenged to engage each thinker and to reconcile their work with my own theology. In this sense, Retrieving Doctrine works as constructive theology.

In the face of these outstanding essays from a top-notch thinker, some unease with the methodology remains. Most importantly, Crisp intentionally and overtly undertakes an “analytic” method for most of the chapters and often constrains himself to a metaphysical discussion. All theologians must choose their constraints and Crisp's choice here funds many fascinating questions and provocations throughout the text. However, one does wonder whether or not this analytically constrained approach will yield equally constrained theological outcomes-like the maxim “When you're holding a hammer, everything looks like a nail.” For instance, does Crisp nail Barth on his universalism through a strictly analytic argument? Is there another way in which Barth intends to be understood that is missed en toto because of what Eleonore Stump terms analytic philosophy's occlusive blindness to other forms of understanding (Wandering in Darkness [Oxford University Press, 2010])? That question remains unresolved within the pages of Retrieving Doctrine but should stick in the craw of all theologians and pastors.

Despite this concern, I do not hesitate to commend Retrieving Doctrine to those who want to reengage these theologians within today's theological landscape. Crisp has reinvigorated these treatments in a way in which most will find intriguing, at the very least. In the so-called evangelical world, it is refreshing to see monuments of Reformed thinking in adjacent examinations, opening the horizon of their overlapping theology to what can often be narrowed divisions within the Reformed church.