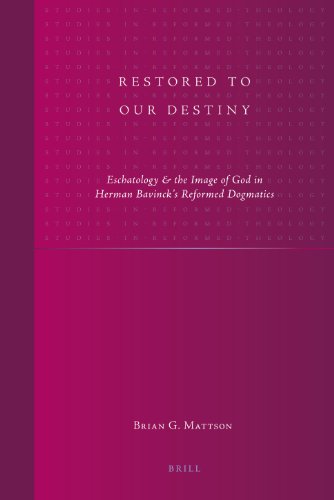 Restored to Our Destiny: Eschatology and the Image of God in Herman Bavinck’s Reformed Dogmatics

This new volume is a rich study in the theology of the late nineteenth- and early twentieth-century Dutch Reformed theologian Herman Bavinck. The author encapsulates his project as being “a conceptual analysis designed to tease out the synthesis between Bavinck's anthropology and eschatology, which together provide the framework for how his soteriology should be understood” (p. 203). And tease out he does in impressive fashion through six chapters.

Chapter 1 sets out the metaphysical foundations that ground Bavinck's account of nature and grace-a motif that plays a central role in his theology. For Bavinck, creation ontologically is a masterpiece of divine art with an eschatological telos. Chapter 2 focuses on the relationship between God and Adam. As Mattson describes, Bavinck presupposes that God's relationship with Adam, “with its 'reciprocal fidelity' and moral obligations” (p. 72), was covenantal in character from the very outset. Central to Mattson's thesis is that Bavinck sees the covenant of works, given in special revelation by God to Adam and Eve in the Garden, as critical in what shapes the outworking of the biblical narrative-what Mattson dubs a “Once upon a time” to a “Lived happily ever after.”

Mattson turns next in chapter 3 to the significance of the image of God in Bavinck's theology. Every human person, in Bavinck's words, is “a micro-divine being” (p. 113), not simply in terms of just bearing the divine image, but rather, humanity is the image of God. The whole human being is the imago Dei-the body as well as the soul belongs integrally to the image of God. This now sets the “Once upon a time” stage in the biblical narrative. Adam's failure to keep the covenant of works changes the narrative, of course. Chapter 4 discusses the ramifications of Adam's fall in regard to the imago Dei. For Bavinck, the divine image still defines humanity in its essence, but the moral qualities native to human nature are now wholly corrupted and inclined to all evil. Mattson all along emphasizes the importance in Bavinck's theology for how the divine plan plays out in redemptive history according to a wonderfully “organic” design. Chapter 5 develops this idea further with respect to Christ and the imago Dei. As Mattson discusses, the covenant of works was broken under the headship of Adam, and all humanity as under Adam is ever since fallen and under God's condemnation. But with Christ as the last Adam, the covenant of works is now both fulfilled and superseded in the covenant of grace under Christ's headship.

Chapter 6, “Christ and Covenant,” expands on the divine plan in both its vertical and horizontal dimensions. By Adam's sin death enters the world, but eschatological hope and salvation enter by way of the covenant of grace, revealed in germinal form immediately after the fall in Gen 3. As Mattson shows, the temporal-historical outworking of the covenant of grace in Bavinck's theology has its ground in the pre-temporal covenant of redemption ( pactum salutis) between the persons of the Trinity. The organic connection between the covenant of works and covenant of grace is seen in the common requirement to fulfill the same fundamental stipulations-complete and unswerving loyalty, gratitude, and obedience to God's will-no different in essence than what God required of Adam and Eve in the Garden. Thus, Christ's obedience in his state of humiliation all the way to the cross achieves “the removal of the original judgment and curse on Adam and his posterity” (p. 230). And the resurrection of Christ represents the eschatological “Lived happily ever after” for all those who would trust wholly in Christ, not in themselves or in any other thing. Mattson aptly finishes this chapter with the quote by Bavinck that inspired the title to his book: “[T]he image of God in humanity may be mangled and mutilated by the sin of the first Adam; but by the last Adam and his re-creating grace they are all the more resplendently restored to their destiny” (p. 236).

This book is an excellent contribution to Brill's Studies in Reformed Theology series. I highly commend it, most especially to those with an historical-theological interest in Bavinck's work, or to those like myself whose interest is systematic-theological. With this latter interest in mind, the balance of my remarks highlights several areas of Bavinck's theology whose wider implications merit further constructive engagement. A key (if not the key) theological point Mattson brings out is that biblical anthropology entails a built-in eschatological component. This idea is certainly not novel or unique to Bavinck, but it remains a fertile area for theological construction in light of Bavinck's own synthesis. Speaking of which, foundational to Bavinck's eschatological framework are the concepts of the covenant of works and the image of God. These concepts are clearly more than just “organizing principles” in his view. Rather, they serve as “organic fundaments” in the design of God's overall plan and outworking of redemptive history. The term “organic” pertains to Bavinck's anti-dualist view (i.e., no nature/grace dichotomy) regarding the relation of creational ontology to redemptive (re-creational) ontology. A question Mattson suggests in his conclusion is whether an organic eschatology can at all neglect the doctrine of the covenant of works. To be additionally considered here is how the covenant of works relates to the role of Israel and the Mosaic covenant and how this then applies christologically.

Two final suggestions for further engagement with Bavinck's theology as analyzed throughout this book concern the image of God and the relationship between nature and grace. Bavinck's holistic doctrine of the imago Dei, for one thing, goes against the grain of much contemporary theological work in this area. It has much both to offer and to challenge current developments of this subject. The relationship between nature and grace is noticeably important in Bavinck's work. In my judgment there is a need to differentiate with much better theological clarity the idea of grace before the fall, which on Bavinck's terms means the idea of grace in the context of Adam being in a covenant of works and the idea of grace after the fall. Such questions and concerns as these are surely worth taking up in ongoing systematic theological work.