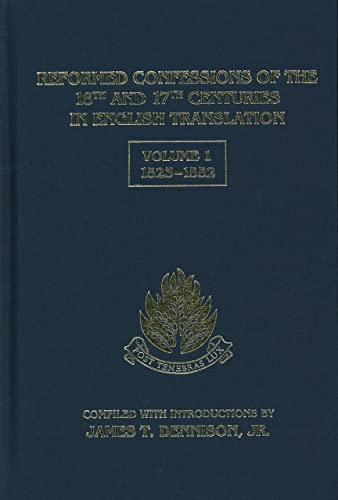 James Dennison has provided an invaluable compilation of sixteenth-century Reformed confessions, some of which are appearing in English for the very first time. Prior to each confession Dennison has written a short introduction in which he articulates the bibliographical, political, and theological circumstances surrounding each confession. As Dennison states, “In the highly charged political atmosphere of the sixteenth century, the confessions also reflect the complex vicissitudes of the ecclesiastical politics of the era” (p. xi). Dennison has arranged the confessions chronologically and each confession is tied to a major Reformer (Zwingli, Calvin, etc.) or Reformation city (Geneva, London, etc.). Dennison begins with Zwingli, including Zwingli’s Sixty-Seven Articles (1523), Short Christian Instruction (1523), Fidei ratio (1530), and Fidei Expositio (1531), as well as those confessions influenced by Zwingli, namely, the Ten Theses of Bern (1528), 1528 East Friesian Preachers’ Confession, and First Confession of Basel (1534). Moreover, Dennison incorporates several confessions either written by Calvin or those close to Calvin. These include William Farel’s Summary (1529), Tetrapolitan Confession (1530), Bern Synod (1532), Lausanne Articles (1536), Consensus Tigurinus (1549), Vallérandus Poullain’s Confession of the Glastonbury Congregation (1551), Calvin’s Catechisms (1537, 1538, 1545), Geneva Confession (1536/37), and Consensus Genevensis or Calvin’s Eternal Predestination (1552). Dennison’s volume also integrates Reformed confessions from England, such as the Anglican Catechism (1549), London Confession of John à Lasco (1551), and Large Emden Catechism of the Strangers’ Church (1551). Finally, Dennison incorporates other Reformed confessions that have gone unnoticed, such as the Waldensian Confession (1530) and Synod of Chanforan (1532), Waldensian Confessions of Mérindol (1541 and 1543) and Provence (1543), Bohemian Confession (1535), First Helvetic Confession of 1536 (in contrast to Bullinger’s famous Second Helvetic Confession thirty years later), Juan Diaz’s Sum of the Christian Religion (1546), Valdés’s Catechism (1549), and Rhaetian Confession (1552).

The major strength of the volume is seen in the theological continuity that exists between each confession. First, most of the confessions highlight the Protestant-Catholic divide of the sixteenth century which led to the Protestant Reformation. Today, due to ecumenical pressure and the evolution from traditional to liberal Catholicism, such a divide is overlooked, but Dennison’s volume reminds Protestants and Catholics alike that at the heart of the divide is disagreement over the gospel itself, namely, whether one is justified by works or by faith alone. Therefore, even in a post-Vatican II world, the five solas of the Reformation emphasized in these confessions remain relevant and stand to be reaffirmed by Protestants to the disdain of the Catholic Church. Moreover, not only do the confessions expose the chasm that separates Catholics from Protestants on issues like sola fide, but the confessions also condemn Rome’s idolatry of Mary, the elevation of images and statues, the sale of indulgences, not to mention penance, purgatory, priestly celibacy, the authority of the papacy, transubstantiation of the Eucharist, and ascetic legalism.

Second, the confessions also demonstrate that the Protestantism birthed from the sixteenth century had at its core a Calvinistic soteriology. The Reformation was not only a negative reaction to the Catholic Church but a positive turn to Augustine and the doctrines of grace. Therefore, though there were exceptions, to be Protestant was to be soteriologically Augustinian. Protestant evangelicalism today is a conglomeration of Calvinists and Arminians (and in some circles Open Theists), but the fact remains that the beginning of Protestantism was characterized by a robust, Augustinian theology as seen in Luther’s Bondage of the Willand Calvin’s Eternal Predestination. Many of the confessions highlight the meticulous sovereignty of God over creation, the unconditional nature of predestination, the utter inability and depravity of man, the efficacy of grace in calling and conversion, and the power of God in unfailingly preserving his elect to the end. Consequently, these confessions demonstrate that an affirmation of the doctrines of grace was at the nucleus of what it meant to be a Protestant Reformer, regardless of whether one lived in Geneva, London, Zurich, or even Spain.

Third, these Reformed Confessions are global in nature. As Dennison states, “Presented here is a display of ‘confessional’ Calvinistic theological thinking in the Old and New World during the sixteenth and seventeenth centuries from Transylvania to New England, from Brazil to Poland” (p. xii). It is nothing short of amazing that these confessions not only spread throughout the world, but that a “Calvinistic theological thinking” evidenced in each of the confessions was sustained even across geographical and linguistic barriers.

Fourth, Dennison enlists Calvin’s Eternal Predestination. Followers of Calvin will appreciate this addition because its inclusion demonstrates that Calvin was not a disgruntled predestinarian seeking to monopolize the church, but was a pastor-theologian whose predestinarianism was both affirmed and advocated by his church in Geneva. In other words, Calvin’s treatise against Bolsec, Georgius, and Pighius was not the lone cry of an authoritarian Protestant pope, but rather the joint effort and endorsement of a Protestant ecclesiastical body that sought to protect the sovereign prerogative of God rather than conditioning God’s choice upon man’s free will.

One minor weakness to Dennison’s compilation is, as Dennison admits (p. xi), the absence of citation, documenting the sources used to introduce each confession. Understandably, the massive size of the work limits space, but Dennison’s introductions would be improved if he were to cite the most definitive resources for each confession, thereby providing the reader with the documentation needed for further research.

In conclusion, Dennison has compiled and introduced a set of Reformed confessions and catechisms, many of which have been without an English translation. Volume one will prove to be no small tool for research on the Reformation, and all forthcoming volumes should be welcomed by those in the Reformed tradition.