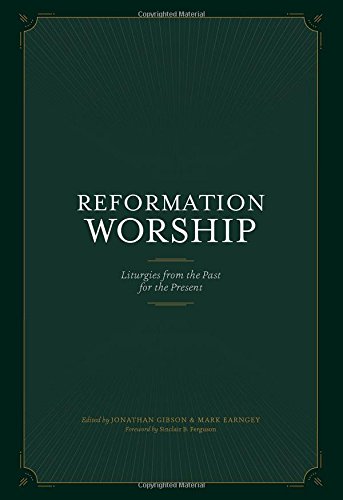 Reformation Worship: Liturgies from the Past for the Present

Many younger church leaders sense an incongruity between the doctrines of grace they believe and the worship paradigms they practice. Worship leaders from the “Young, Restless, and Reformed” movement know that the reformation reclaimed the doctrine of justification, but they are less familiar with the reformers’ passion to reform worship.

Young church leaders have been raised with contemporary worship services patterned after a mixture of youth ministry, Pentecostalism, and the church growth movement (for a defense of this lineage see Lester Ruth and Swee Hong Lim’s book, Lovin’ on Jesus: A Concise History of Contemporary Worship [Nashville: Abingdon, 2017]). These services follow an order of events that traces its roots back to the New Measures of the frontier revivals. Beginning with a casual welcome and announcements, the services continue with a four or five song set that ends with a prayer. After singing, the preacher delivers a sermon that concludes with another song of response and (in more charismatic circles) a time of ministry before dismissal.

For these young church leaders, the Calvinism on their bookshelves does not match the revivalism in their church gatherings. And while they might not entirely recognize the incongruity, they at least feel something is wrong. Something smells Finney!

A new book provides an unusually rich opportunity for church leaders to learn from the gathered worship services of Reformation churches. Reformation Worship: Liturgies from the Past for the Present is a new collection of 16th century liturgies assembled from international outcroppings of Reformation rock. It provides this outlook using three introductory chapters and twenty-six primary liturgical documents. While the book thoughtfully synthesizes these different elements, it is helpful to consider them individually before evaluating their cumulative effect.

The first introductory essay, by Jonathan Gibson, is entitled, “Worship: On Earth as It Is in Heaven.” I have never read a better chapter-length biblical theology of worship. Beginning with Eden, Gibson makes the case that humanity was created to worship, but that the practice of worship necessarily transformed after the fall. Using typological insights from Adam, Israel, and Solomon, Gibson follows the basic contours of Graeme Goldsworthy’s biblical theology to argue that God’s idolatrous sons (e.g., Adam, Israel, and Solomon) failed to worship him perfectly, so that God’s perfect son was needed to worship him aright and make us into worshipful sons of God. His essay ends by considering how our present moment of salvation history ought to be reflected in our corporate worship gatherings.

The second essay, by Mark Earngey, “Soli Deo Gloria: The Reformation of Worship,” traces the historical background and development of reformation liturgies. Against medieval devotion and the accretion of Roman Catholic liturgical practices, Earngey describes Reformed worship as a “drastic simplification” which allowed “the power of the unadulterated good news stand out” (p. 27). These liturgies spread the gospel through Europe as much as the publication of any Reformed document. Earngey, in a triumph of concision, avoids simplicity and demonstrates the commonality and diversity among Reformed liturgical practice.

Gibson and Earngey co-write their third chapter, “Worshiping in the Tradition,” harmonizing insights from the many original source documents they survey. Though the main headings are not surprising—Christian worship is Trinitarian, saturated with the written Word, centered on the preached Word—this is not to say that there are no surprises to be found. Today’s worship service planners will probably be taken aback by the Reformers’ insistence upon church discipline at the Lord’s Supper (pp. 59–61) and the prominent, singular role of the presiding minister (p. 69). Each of these sections provides illustrative examples from the Reformation texts demonstrating their main headings.

The editors introduce each of the primary works with helpful and concise essays that situate the liturgical documents within their context. By explaining the terroir of each liturgical document, readers are equipped to understand the necessary changes to adapt reformation practices to their own situation. Additionally, a helpful section of terminological “conventions” is included to assist readers who don’t know their “Matins” (morning prayer) from their “Paten” (Eucharistic bread plate).

Each of the primary works is presented in a fresh translation—a monumental feat. A quick comparison of Luther’s 1523 “Form of the Mass” situates this translation as more modern than Paul Zeller Strodach’s attempt (as found in Bard Thompson’s Liturgies of the Western Church [Minneapolis: Fortress, 1980], 106–37), yet slightly less colloquial than Ulrich S. Leupold’s update (LW 53:15–40). Separate translators oversaw German and Dutch, French, and Latin works. Older English works have been given updated language, and musical notation has been provided (a fine advance over Thompson). Overall, the texts read with admirable clarity and appropriate devotional warmth.

Collections like this are often criticized for arbitrary editorial decisions: Why was one text selected and another omitted? This volume avoids much of that criticism with clear editorial criteria and generous page length. Gibson and Earngey ought to be commended for their clear purpose and careful execution and New Growth Press ought to be commended for printing such a lengthy (724 page!) tome.

Books discussing worship often succumb to the danger of advocacy. What role ought Protestant worship traditions have in Protestant churches today? The Reformers held that while final authority rests in the Scriptures alone, tradition has a derivative authority to the degree that it clearly reflects Scripture’s authority. They refused to confuse biblical magisterial authority with ecclesial ministerial authority. To the degree that Gibson and Earngey help church leaders more thoughtfully consider Scripture’s call to worship, the Reformers would be pleased.

Protestant worship service planners will pursue biblical faithfulness through their own study of God’s Word and through thoughtful examination of how other believers have planned their services. Protestant churches, to borrow Kevin Vanhoozer’s metaphor, act as a “neighborhood association,” voluntarily organizing activities within a neighborhood. They are not like a “homeowners association,” mandating and enforcing strict codes of compliance. This book cheerfully commends the values of Reformation worship without carelessly commanding the adoption of all Reformed practices.

Overall, the book achieves its irenic goal. It advocates for a liturgical retrieval—a creative recovery of our Protestant heritage for the purpose of faithful ministry within our Protestant churches. Every person who oversees the gathering of the Lord’s people for their local church ought to purchase this book and carefully search out its riches.