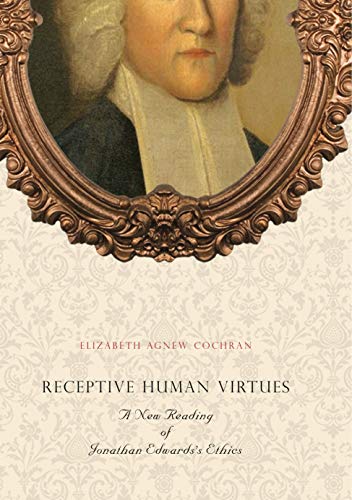 In 2003, there was a publishing blitz to coincide with the tercentenary of Jonathan Edwards's birth. It would have been safe to assume the interest in Edwards would quickly wane. Instead, that initial publishing blitz has continued. The field of Edwards studies continues to develop and expand at an ever-increasing rate. That said, there is much work to be done. One major lacuna in the field has been the failure to put Edwards in conversation with contemporary issues, questions, and figures. This is not neglected entirely, but the breadth of the field demands an increasing effort to show how Edwards is an important figure for theological retrieval. Fortunately, Elizabeth Cochran does just that, addressing key assumptions in the field of ethics and invoking Edwards as an important theological ethicist for contemporary ethical discourse.

Cochran runs her account of Edwards's ethics against the backdrop of contemporary assertions concerning the Enlightenment and virtue ethics. Using Alasdair MacIntyre and J. B. Schneewind to outline these assertions, Cochran argues that Edwards serves as a decisive counter-example to their claims. From many ethicists' point of view, the Enlightenment project failed modernity by undermining virtue ethics. Therefore, recovering virtue ethics is seen as central to eliminating Enlightenment values that continue to assert their authority in our era. The generation preceding Edwards is often seen as the main culprit for this decline, capitulating to the force of the enlightenment rather than seeing its destructive tendencies. This makes Edwards a particularly interesting test case. If these theories about Enlightenment values and the neglect of virtue ethics are true, then Edwards should be steeped in a project already burying itself. Rather, Cochran argues, Edwards provides a theologically robust account of virtue ethics that speaks meaningfully and deeply into contemporary ethical discourse.

In Cochran's evenhanded analysis, Edwards is portrayed as a theological thinker who appropriated the primary ethical theories of his day. Therefore, Cochran addresses Edwards's Neoplatonic coloring through his interactions with Cambridge Platonism. Rather than allowing philosophical influences to overtake her account, Cochran rightly grasps Edwards's impulse to adopt and adapt intellectual ideas into a Reformed Trinitarian theology. Instead of wielding his theology against these philosophical schools, Edwards breathes fresh life into them by relocating them in relation to the communicative God of Christian revelation.

At the heart of Edwards's ethical thought is the anti-Aristotelian notion that habituation cannot lead to true virtue. Virtues are received and not achieved, we might say. This impulse in Edwards's work follows his Reformed soteriology. Just as salvation is not earned, so virtue, a fruit of salvation, cannot be earned. All true moral action, therefore, is not only received from God, but is an imaging of God's own life. Human virtuous activity is an image or type of the divine nature. God's emanating self-revelation is for the purpose of revealing his nature that people might participate in his own love. Creaturely participation in God's self-revelation is the engine of the moral life and conformity to God's Son. Moral formation begins with an understanding and vision of the goodness and beauty of God known in Christ. This is, therefore, a deeply spiritual and theocentric account of the moral life.

Commentators have long noted that Edwards's ethical thought is located within his aesthetics. Furthermore, few doubt that in Edwards's thought God is the Good, the True, and the Beautiful. Cochran goes several steps further by turning her attention to Christ's role to exemplify the virtues as well as the development of what she calls “incomplete virtues.” To the first, one of Christ's roles in the incarnation was to portray virtue. As a fully divine and fully human person, Christ “exhibits” and “practices” both divine and human virtue. Creaturely virtue, in other words, is unveiled perfectly in the person and work of Christ. This christological perfection can, at times, rework the virtues in a way unknown in the tradition. Cochran uses Christ's embodiment of humility as an example of one such virtue. Again, Edwards the theologian is important here. Virtue is not delineated as a model in which God must fit. Rather, Christ perfectly personifies creaturely virtue in such a way that we come to Christ to ask what it means to love, have humility, etc. To the second point noted above, Edwards provides a distinctive account for virtues available to sinful humanity apart from God. Cochran describes these as “incomplete virtues.” These incomplete virtues have a “negative moral goodness”; they oppose sin in some manner; and they complement and coincide with true virtue. These incomplete virtues lack true virtue and therefore lack a grasp of divine beauty inherent therein. Interestingly, unlike true virtue that is received and not developed through habituation, incomplete virtues are. This underscores how different these are to true virtue, even as it upholds their value in society. Importantly, these incomplete virtues, while failing to be true virtue, are still capable of being sanctified by God without changing their “denominations.” These are not without purpose, in other words. This is particularly relevant when it is kept in mind that Edwards was a pastor of a congregation who had to attend church. Edwards continually worried about his lazy, “sermon proof” congregation. The incomplete virtues were a way to encourage the unregenerate in ethical action even while pointing them to Christ, the only place where true virtue is finally known.

Cochran offers us a much-needed volume on Edwards's ethics that provides both a close reading of Edwards's virtue theory, putting it in conversation with the tradition, as well as engaging contemporary judgments concerning the history of ethical thought. Cochran navigates Edwards's material and context with rigor and dexterity and speaks helpfully into current conversations and debates. I found it particularly helpful when she would stand back from her argument and draw contrasts and comparisons with the tradition, particularly Aquinas and Augustine. That said, at times, it would have been helpful for her to stand back from her argument as a whole to reorient the reader to her case against both MacIntyre and Schneewind. Admittedly, this might have more to do with my own naivety about these issues, but I think it would have helped the cohesion of her argument. That said, this volume is an excellent addition to the field of Edwards studies. It, undoubtedly, adds to the case being made that Edwards is a theologian of the highest order and helps to make the case that his voice deserves to be listened to.