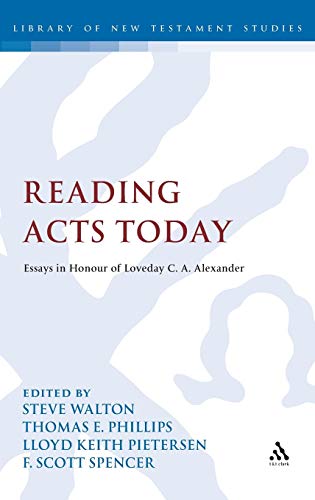 This volume is offered in honor of Loveday Alexander, Professor Emerita of Biblical Studies at the University of Sheffield and Canon Theologian of Chester Cathedral. The contributors include two of Alexander's former PhD students (Walton, Pietersen) and other accomplished NT scholars, both conservative and critical, from North America and Europe. The essays offer various models for “reading Acts today,” including comparison with extra-biblical texts, historical and source criticism, reception history, and literary and theological studies.

Part one includes five essays broadly concerned with “Reading Acts in its Ancient Context,” reflecting Professor Alexander's scholarly contribution in The Preface to Luke's Gospel (1993) and Acts in its Ancient Literary Context (2005). In ch. 1, Richard Burridge contends that treating Luke-Acts “as a single work in two volumes is problematic for genre” (p. 4). Applying the criteria he employed in his work on the genre of the Gospels, Burridge concludes that Acts is best described as a “biographical monograph,” which recounts Jesus' continued activity through the ministry of Peter, Paul, and the early church (p. 28). While this is an important contribution to the discussion of the genre of Acts, it is unfortunate that Burridge does not consider Brian Rosner's suggestion that Acts is best categorized as “biblical history,” consciously modeled on the historical books of the Septuagint (“Acts and Biblical History,” in Winter and Clarke, eds. The Book of Acts in its Ancient Literary Setting [Grand Rapids: Eerdmans, 1993], 65-82).

In ch. 2, Thomas Phillips explores the significance of the “sign” of swaddling clothes in the Lukan infancy narrative. He detects extensive symbolic use of swaddling clothes in Greek literature before the NT period, particularly in Euripides' Ion and the Homeric Hymn to Hermes. Phillips then suggests that “the literary motif of a divine son establishing his place within the divine family” offers a culturally appropriate backdrop for reading Luke 2:7, 12. The author ably explores the interesting ancient motif of swaddling clothes, though one wonders if the Jewish shepherds, to whom this “sign” is given in Luke 2:12, would have possibly made such a connection.

In ch. 3, Dennis MacDonald defends the novel thesis that Luke's narration of Judas' death is dependent on Papias. The author builds his case on a number of premises not defended in this essay, such as Mark's knowledge of Q and a second-century dating of Acts. Further, the evidence MacDonald offers for Luke's dependence on Papias (whose writings are preserved by fourth-century authors Eusebius and Apollinaris) would more plausibly be read the other way around (as suggested by Richard Bauckham, Jesus and the Eyewitnesses [Grand Rapids: Eerdmans, 2006], 14).

In ch. 4, Scott Spencer explores the emotional impact of the death of Ananias and Sapphira in Luke's narrative. He reads the references to “great fear” in Acts 5:5, 11 in dialogue with Aristotle, who advised that readers fear “the right things . . . for the right purpose . . . in the right manner . . . at the right time” (cited on p. 66). Spencer concludes, “Ananias and Sapphira literally die of shame” (p. 73), and their shameful death does not move the church to cowardly retreat but to bold advance.

In ch. 5, Barry Matlock examines the portrayal of Paul's conversion/call in his undisputed letters (Gal 1:11-17; Phil 3:2-11; 1 Cor 15:1-11), noting differences of perspective between these letters and Acts concerning Paul's past persecutions and his claims to apostleship as a witness to the risen Lord. Matlock's essay may have been strengthened (and at some points challenged) by more substantial engagement with 1 Tim 1:12-17; Acts 22:3-21; 26:4-23.

Part two offers six essays devoted to “Reading Themes in Acts.” In ch. 6, Joel Green critically assesses recent challenges to the unity of Luke-Acts on the grounds of canonical placement (Wall), reception history (Rowe), and authorship (Walters). He concludes, “Acts itself invites a reading strategy that ties the narrative of Acts back into Luke's Gospel, with Acts as a deliberate narrative continuation of Luke” (p. 106).

In ch. 7, James Dunn suggests that Luke and Paul offer readers different geographical and ideological perspectives in their portrait of Paul. Dunn maintains that Luke follows a “Jerusalem version” of Paul's controversial visits to Jerusalem and thereby “went out of his way to present Paul in terms which more traditionalist Jewish believers . . . would probably have preferred” (p. 136). He considers Paul and Luke to be in “outrageous disagreement” regarding the number of Paul's Jerusalem visits (p. 127), but Dunn's reading (which equates Gal 2:1-10 and Acts 15) is not without its problems. This reviewer wonders if the use of Paul's Jewish name “Saul” (until 13:9) and the “we” passages (first at 16:10) might offer additional clues not considered here by Dunn regarding Luke's narrative portrait of Paul.

In ch. 8, Heidi Hornik and Mikeal Parsons assert that Luke's depiction of Acts 2 utilizes language “that appeals as much to the eye as to the ear” (p. 139), a strategy called ekphrasis. The authors then consider the reception history of the Pentecost scene in Christian liturgy and visual arts.

In ch. 9, Howard Marshall argues that Acts 20:28 serves as the functional equivalent of the ransom saying in Mark 10:45b. He suggests that while the Christus Victor motif is “integral” to the theology of Acts (p. 166), such an understanding assumes the atoning significance of Jesus' death, which is most explicit in Acts 20:28.

In the final chapter, Steve Walton considers “the two sides of people engaging with God: the divine initiative and the human response” (p. 188). In Acts, angelic beings, the Spirit, visions and dreams, Scriptural interpretation, and the name of Jesus are means by which God is known and experienced. Walton understands Acts 2:42-47 as programmatic for the corporate life of believers and suggests that this portrait invites readers “to identify with those believers and to live and respond to God in similar ways” (p. 200).

The editors of Reading Acts Today are to be commended for offering a fine tribute to Professor Alexander, which should be a welcome addition to theological libraries worldwide. Many reading strategies for Acts are illustrated effectively by able scholars, though some important issues such as Luke's use of Scripture or textual criticism in Acts are not addressed. Among the many fine essays in Reading Acts Today, those by Burridge (ch. 1), Green (ch. 6), and Marshall (ch. 9) clearly advance the discussion of Acts scholarship on genre, the narrative unity of Luke-Acts, and Luke's theology of atonement, respectively. Walton's chapter on spirituality may be particularly useful to pastors and others seeking to apply Acts to the life of the church.