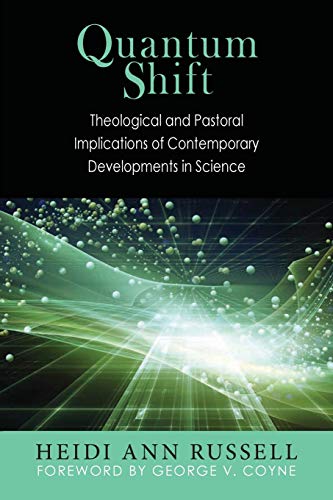 Quantum Shift consists of a summary of a number of mostly cutting edge topics in contemporary physics, along with analogical pastoral applications. The list of topics is quite impressive: relativity, wave particle complementarity, entanglement, complexity theory, the Big Bang, the possibility of a multiverse, cosmic death and resurrection, and superstring theory/loop quantum gravity. Pastoral applications relate to a range of subjects, including relationship, the overthrow of black and white thinking, immanence and transcendence, the whole is greater than the parts, the importance of social sin and justice, God brings order out of chaos yet complexity remains, and so on.

For a theologian who does not (apparently) have a background in physics, the theme of this book strikes me as an ambitious project to undertake. With a book like this, one might anticipate simplistic representations of contemporary physics with applications that are a stretch, but that is far from what we find. The physics that is represented has been accurately portrayed for the most part, and the pastoral implications, though not always compelling as coming from the physics, are far from trivial and always carefully represented as “analogy.” Let me add at this point also though, that for the evangelical reader, relatively few of the applications will prove to be of interest. This stems largely from the fact that they have been motivated from contemporary Catholic theologians, from Karl Rahner to William Stoeger, with the baggage that comes along.

Russell represents the physics well for the most part, carefully quoting or paraphrasing professionals who popularize the field. However, part of the problem is in choosing what to quote, or what not to quote. For example, in explaining the twin paradox, Russell quotes Brian Greene as saying “the combined speed of any object’s motion through space and its motion through time is always precisely equal to the speed of light” (p. 4). While Greene has a point in making this statement (found in four dimensional physics), a usual speed relates space to time and physicists don’t generally think of traveling through time as speed. The real point would be that it is possible to find a shorter distance through time if you also travel through space. A second and more subtle issue has to do with the use of the word “chaos” in chapter 4. It is sometimes used in its technical sense within complexity theory, but other times it just means randomness, and it is difficult from the context to tell the difference. A third illustration, and perhaps the most egregious, is in the discussion of entanglement. Quoting Robert John Russell (p. 61), the author implies that the mystery lies in the fact that measurements of a spin variable must be equal and opposite when measured along the same axis. This however simply follows from classical physics. The mystery actually resides in the fact that when you measure the spin of an electron, the measurement can only take one of two discrete values no matter what measurement axis is chosen. This leads to a nonintuitive result when measuring spin variables along different axes, although none of that comes through in the author’s discussion. Though a bit technical, this illustrates that the physics is not always accurately represented.

Though I don’t have room to discuss all of the pastoral applications offered, let me describe two of them—the most intriguing, and the most problematic from my perspective. By far the most intriguing is the chapter on particle wave complementarity. In this chapter, Niels Bohr is portrayed as saying that the wave in quantum mechanics represents a potential, which is actualized as a particle when measured. Thus the wave describes the probabilities/possibilities for all outcomes, whereas the measurement actualizes a particular outcome. As Russell tells us, Karl Rahner expressed a similar outlook in relation to spirit and embodiment. Spirit represents our potential to decide concerning a range of possibilities, and a decision actualizes one of them. Whether this is good theology, it is certainly intriguing to think about the analogy between the different possibilities, each realm unfolding as possibilities are actualized, whether concerning particle measurements or human decisions.

Most problematic was the chapter on Cosmic Death and Resurrection. The expected end of our universe from the scientific perspective is that ultimately everything will end in a “heat death” where the whole universe is in equilibrium at a very low temperature. Picking up on the chapter on multiverse with the analogy of potential universes as choices, she says that the resurrection of mankind can be seen in analogy with the death of one universe and the re-creation of another, with essentially no reference to a personal resurrection. Russell is suggesting that the resurrection of mankind should be viewed more in the general context of beginnings, endings, and ongoing life in general rather than the hope of the resurrection of the dead in particular. Indeed, she says, “Theologically, when we think about the end of time, we use the image of a new creation—a new heavens and a new earth—but we do not imagine that there is literally going to be a new planet created on which we start over” (p. 155). Rather, “Our great hope in God can be that we are not the end of the story of creation, that creation continues after the extinction of humanity, after the death of our sun and solar system, after our galaxy becomes a black hole, perhaps giving life to a new universe in the process, and after our universe itself comes to an end” (pp. 161–62). This doesn’t square well with Paul’s statement, “If only for this life we have hope in Christ, we are to be pitied more than all men. But Christ has indeed been raised from the dead, the firstfruits of those who have fallen asleep” (1 Corinthians 15:19 NIV). Although Russell quotes Moltmann to support her views (p. 158), she has likely misunderstood his theology at this point.

Though I could raise other criticisms, in summary, for those who like to keep up with what people of other persuasions are saying, Quantum Shift, might constitute intriguing and thought provoking reading. But to learn the physics per se, or to find appropriate analogies for pastoral use among evangelicals, I would suggest looking elsewhere.