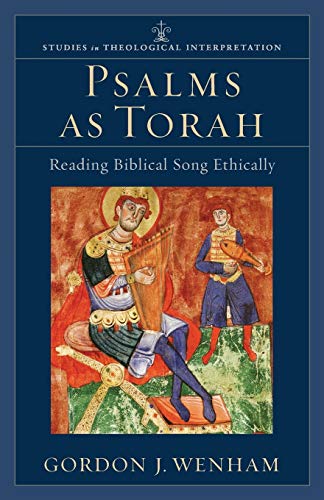 Wenham begins by observing that the Psalter is both a book for worship and for instruction. Chapter 1 reviews the uses of the Psalms by Jewish and Christian interpreters from the OT itself until the present day. Chapter 2 provides a gentle introduction to the history of critical psalms study, with a special focus on psalm titles. This begins with traditional historical readings and traces the rise of form and canonical criticism. Chapter 3 draws on the work of David Carr and Paul Griffiths to argue that the Psalter fits the pattern of an anthology of sacred texts meant to be memorized and that memorizing the psalms “has a peculiarly character-forming effect on the memorizer” (p. 53). Chapter 4 draws on reader-response theory via Dorothea Erbele-Küster and speech-act theory via Donald Evans to argue that praying the psalms involves the user in ways unlike other genres in Scripture. In contrast to reading law or narrative, in which the reader is passive, those who pray the psalms commit themselves to the attitudes and actions commended in the text.

With this methodological foundation, Wenham proceeds to analyze the ethics of the Psalter. Chapter 5 traces the concept of “law” in the Psalter with a focus on Pss 1, 19, and 119. Chapter 6 then compares the Psalms to the “law,” focusing in particular on the Ten Commandments. He observes that the Sabbath command does not appear in the Psalter, while the prohibition of false witness receives frequent mention. Chapter 7 examines the Psalter’s use of narrative texts from the rest of the OT, arguing that the Psalter’s retelling of past events is meant to educate in theology and ethics. Chapter 8 details various virtues and vices in the Psalms. In this chapter Wenham considers both the contrast between the righteous and the wicked and the concept of the imitation of God. He briefly addresses the question of the basis for ethics in the Psalter, suggesting that while both deontological approaches (in this case, ethics based on divine command) and consequentialist approaches (ethics based on consequences) can be found woven together in the Psalter, it leans in the direction of deontology because God is so frequently described as judge and king. Chapter 9 provides a helpful and practical approach to the imprecatory psalms, or psalms calling for divine intervention. Finally, chapter 10 tests his theory about the transformative effects of prayed ethics by examining the influence of the Psalms on the NT. He highlights the influence of psalmic ethics in Luke, 1 Peter, Romans, Hebrews, and Revelation.

The unique contribution of this book is Wenham’s argument based on speech-act theory that the prayed ethics of the Psalter transforms its readers in ways distinct from other genres in the OT. Wenham touches on this argument throughout the work, culminating in his treatment of select NT texts. Wenham helpfully identifies the Psalter’s influence both on the NT presentation of Jesus as the righteous sufferer of the Psalms and on its teaching to Christians to imitate Christ in suffering while hoping in the vindication of God’s glory.

If I have any concern about the book, it is the extent to which Wenham reads the Psalter through the lens of the rest of the OT. To be fair, this approach has warrant. In the first volume of his OT Theology, Gerhard von Rad famously classified the Psalter as “Israel’s response” to God. However, Wenham’s choice of the Decalogue as a grid through which to examine psalmic ethics is surprising. Why does he begin there and not the Deuteronomic kingship law (cf. Jamie Grant, The King as Exemplar: The Function of Deuteronomy’s Kingship Law in the Shaping of the Book of Psalms [Atlanta: Society of Biblical Literature, 2004])? He rightly observes at several points that speech is the most prominent ethical issue raised in the Psalter. Why is that the case? Is there an explanation to be found within the canonical shape of the Psalter? Why not begin with the relational triangle of God, the psalmist, and the enemy? To be fair to Wenham, this is the first monograph on the subject to date, and his work establishes a suitable foundation upon which others may build.

Gordon Wenham has done a service to the scholarly community in bringing this study to print. It addresses a surprising scholarly neglect of the Psalter as a resource for biblical ethics and provides a starting point for future ethical study of this much-beloved book. Psalms as Torah will prove valuable not only for scholars, but also for pastors, students, and educated laypeople who desire to learn, teach, memorize, and pray the Psalms. It has already affected the way that I pray, so I commend it to all who love the Psalms.