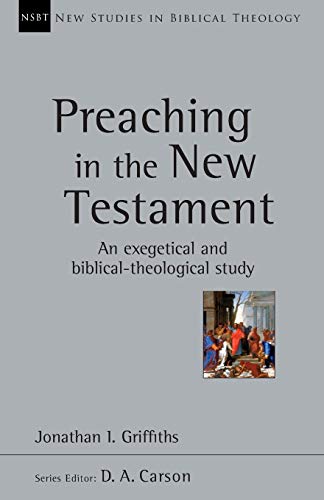 Preaching in the New Testament: An Exegetical and Biblical-Theological Study

Jonathan Griffiths is the Lead Pastor of the Metropolitan Bible Church, Ottawa, Canada. He formerly served as an instructor on the Cornhill Training Course at the Proclamation Trust, London. He wrote Hebrews and Divine Speech (London: Bloomsbury T&T Clark, 2014) and edited The Perfect Saviour: Key Themes in Hebrews (Nottingham: Inter-Varsity, 2012). Jonathan holds a PhD from the University of Cambridge.

This is an important and valuable book. It tackles two foundational questions about what we call ‘preaching’:

First, according to Scripture, is there actually such a thing as ‘preaching’ that can be differentiated in any way from other forms of word ministry? Or, if there was such a phenomenon in the context of the Old Testament prophetic ministries, or in the ministries of Jesus and his apostles, is there still such a thing as a specialized word ministry called ‘preaching’ in the post-apostolic age? … We then encounter a second and related question: How would post-apostolic ‘preaching’ relate to the preaching of the Old Testament prophets and of Jesus and his apostles? (pp. 2, 3)

These questions are the focus of the book, and Griffiths tackles them by developing a biblical theology of preaching; by investigating three crucial words: εὐαγγελίζομαι, καταγγέλλω, and κηρύσσω; he then studies key passages in 2 Timothy, Romans, 1 and 2 Corinthians, 1 Thessalonians, and Hebrews. This is a powerful combination, including as it does biblical theology, key words, and key passages. He also includes a discussion of the relationship between Old Testament prophets and New Testament preachers. And he places preaching in the context of the broader word ministries of the New Testament. Through this exercise he develops a robust and convincing exposition of the crucial role of preaching in post-apostolic ministry, and also demonstrates its continuity with and dependence on the ministry of Old Testament prophets and New Testament apostles.

Here are his conclusions:

All this is carefully and comprehensively argued and supported, yet presented with elegant simplicity. He clarifies what the Bible teaches, and does not go beyond the evidence. You will miss the significance and power of these conclusions if you do not read the book yourself, and see the evidence with which Griffiths supports these claims.

This is important evidence we need to keep in mind when making decisions about the place of preaching within ministry in both the Western and the Majority world. At least the book makes it clear that preaching is not a Western invention or the product of a rationalist and scientific age!

Issues which could be profitably followed up include the following: