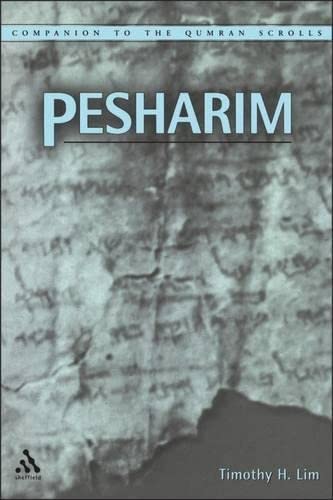 PESHARIM, COMPANION TO THE QUMRAN SCROLLS 3

This is one of a new series of textbooks for students, devoted to the Dead Sea Scrolls. Though brief, it has full scholarly apparatus and discusses questions in depth. As the title of the series indicates, it is a companion and not an edition, and readers will need to use it alongside a text of the pesharim (a full list of editions is available).

The Hebrew term pesher means ‘interpretation’, and it occurs in a significant number of scrolls from Qumran. The books and passages expounded are nearly all from the Prophets and Psalms (as in the NT, and the Psalmists are regarded as prophets), and the remainder are also from the OT. The so-called ‘Pesher on the Apocalypse of Weeks’ (listed here on p. 3 and discussed on p. 15) does not have that title in the original and does not use the word pesher in its text.

The method of the pesharim is to quote, or at least refer to, a biblical passage, and then to give its interpretation. The interpretation always refers to more-or-less contemporary events and the experiences of the Qumran school. Often it seems arbitrary, but the Habakkuk Pesher attributes its interpretations to the Teacher of Righteousness, ‘to whom God disclosed all the mysteries of the words of his servants to the prophets’ [1 QpHab 7:4–5)

After a helpful general introduction, Lim discusses first ‘continuous’ pesharim and ‘thematic’ pesharim in some detail. He next goes on to the biblical text use in the pesharim, which is usually said to be proto-Massoretic, with deviations due to exegetical needs. Lim does not altogether deny this, but argues that the deviations may sometimes be drawn from other forms of existing text, of which there were more than used to be thought.

The penultimate chapter is on ‘History in the Pesharim’. This is a frustrating subject, because the people referred to are usually given aliases or descriptive titles rather than their actual names, and it is doubtful whether we have a sufficiently detailed knowledge of the history from other sources to enable us to identify any of them with certainly. Who was the ‘Wicked Priest’? Who was the ‘Man of the Lie’? Above all, who was the ‘Teacher of Righteouseness’?

Finally, there is a brief chapter on ‘Pesher and the New Testament’. This strikes a needful cautionary note about the loose use of the term ‘pesher’ to describe NT biblical interpretation, ignoring the differences. It is the more surprising therefore to find the author assigning the Qumran community and the Early Church to a ‘common sectarian matrix’. He is clear that they were not identical, but he apparently thinks them alike in a way that neither of them was like the Pharisees of the Sadducees. This is a very controversial opinion. Jesus and his disciples were not deliberate separatists. They say much more of the Pharisees and Sadducees than they did of the Qumran school, and though there are undoubted parallels with the latter, the parallels with the Pharisees are a good deal more numerous.

On more than one occasion, the author claims that the Qumran school had an open biblical canon as well as fluid biblical text. These two do not necessarily go together. If their canon was open, why do the Pesharim community exclusively on texts that were later canonical? And why is the sort of revelation that is claimed simply a revelation of the meaning of the existing Scriptures? Certainly the Qumran school had certain standard texts which they greatly esteemed in addition to the Scriptures, notably 1 Enoch and Jubilees, but when they quote from them, which they rarely do, it is in a different manner from the way they quote the Scriptures.