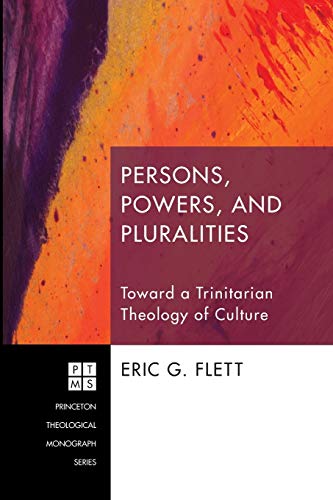 Persons, Powers, and Pluralities: Towards a Trinitarian Theology of Culture

Persons, Powers, and Pluralities is the product of a doctoral thesis written at King’s College, London in 2004. Flett gained his initial interest in a theology of culture while studying at Fuller Theological Seminary under the tutelage of the late Ray Anderson. The purpose of this project is to sketch the contours of a trinitarian theology of culture rooted in the theological vision of Thomas F. Torrance.

While neither the book’s title nor subtitle name T. F. Torrance, a look at the table of contents makes it clear that this book is largely an appreciative development of Torrance’s theological thought. The book has six chapters, and the first five are expositions of Torrance:

The final chapter acts as Flett’s own improvisations based on the trinitarian theology of order which he gleans from Torrance.

This format is a strength; not a weakness. Flett is careful to give Torrance’s thought its due and refuses the temptation to cherry-pick at random from Torrance’s framework. It is also a strength because Flett is creatively and yet faithfully extending Torrance’s trinitarian theology into a field of knowledge that Torrance himself did not directly address and which may not have been central to Torrance’s explicit research goals. Flett is self-consciously improvising, yet throughout the text he offers helpful markers so that the reader can recognize the moves he makes. By combining Torrance’s trinitarian doctrine of God as Creator, creation as contingent, and the human person as a ‘priest of creation and mediator of order’, Flett brings to light the basis of what Torrance terms ‘the ontological substructure of our social existence’. He puts Torrance’s core structure in dialogue with modern anthropological theories of culture, and the resultant chemistry is promising: an understanding of culture as directed and teleologically related to the triune Creator.

The central concept Flett seeks to express and explicitly direct toward social and cultural concerns is Torrance’s idea of a ‘social-coefficient of knowledge’. Flett notes that Torrance improvises this term by borrowing from two realms of thought—mathematics and sociology—and putting them in dialogue with one another.

In brief, a social-coefficient of knowledge is ‘the social embodiment of a knowing relation’ (p. 237) which involves three variables: an objective pole, a subjective pole, and the quality of relation between these two poles. The relation between the two poles, Flett notes, must be properly ordered ‘in such a way that facilitates the disclosure of the objective pole, the transformation of the subjective pole, and an appropriate social embodiment that reflects both subject and object’ (p. 151). The kind of knowledge shared between these two poles falls on a spectrum of varying degrees of distortion or transparency and consequently results in concrete social expressions and embodiments which reflect the quality of that relation. Flett likens the idea of a social-coefficient with the social theory of ‘centered sets’, for both are fundamentally defined, shaped, and bounded by their centers and the nature of the relationships and structures that form around those centers (p. 154). This knowing relation between the objective and subjective pole takes place dialogically and dialectically in history and results in the social embodiment of that knowing relation. For this knowing relation (social coefficient) to be effective, a degree of ‘semantic intentionality’ is necessary so that symbols, structures, and rituals can effectively refer beyond themselves to the objective pole where the true locus of meaning exists (p. 167). It is the task of the subjective pole to articulate ‘and socially embody the knowledge “received” from the objective pole of the relation’ (p. 167). The key which holds these three factors (objective, subjective, and the relation between) is a fourth factor, the transcendent ground of meaning. This ‘Archimedean point’ provides a transcendent reference point which functions as a ‘tuning fork’ coordinating the other variables one to another. In this way, subjective and objective poles are both oriented by their reference to a point ‘beyond the dyadic relation itself’ (p. 175). Right relation to the objective world requires an ‘articulate framework of thought’ which is mediated to us through our ‘social existence’ in the world. These social coefficients of knowledge do not mediate explicit conceptual knowledge, but a “predisposition” toward reality. Yet as human beings there is also an ‘ontological substructure’ to our social existence which has its source in the imago Dei. The ontological structure of personal being and its specific telos must be approximated in our social existence if it is to be sustained and not subverted (pp. 185–87).

Leaving the technical jargon aside for the moment, what Flett offers is a distinctly trinitarian way of comprehending the human situation as cultural beings. Because of the transcendent Archimedean reference point of the triune Creator, human persons are set ‘free to be determinate without being determined’ (p. 165). As those who are created in the image of the triune God, human persons are given a vocation as priests of creation and mediators of order and as such are invited and called to develop diverse symbolic and cultural forms which correlate and correspond to created reality without slavishly mimicking it. Throughout the book, Flett compares this creative cultural task to that of improvisational music in which the musician not only is called upon to reflect accurately a particular piece of music, but also ‘to bring something of him or herself to the piece in a fresh and creative way’. A pure mimetic rendering would actually be ‘a “violation” of the “semantic intentionality” of the piece’ (p. 169).

Social coefficients function by providing a symbolic environment which orders social life and in so doing shapes personal being. As such, they participate in and with reality itself through an ongoing mutual modification which is more and more or less and less faithful to their created telos. It’s worth quoting Flett at length:

One will not find a lot of critique of Torrance within these pages. Flett’s purpose is not to critique Torrance, but to use him as here noted by ‘transposing’ Torrance’s ideas from their original context within a dialogue with science and to apply them to a theology of culture.

Other than the first chapter (which is unfortunately too long), the book refrains from annoying repetition, and it gradually builds a case which flowers in the final chapter. Less patient readers might be tempted to jump to the final chapter of the book, especially as that chapter bears the book’s title. While this is certainly doable, and might even serve as a place to start, what would be missed is the trinitarian coherence which holds Flett’s argument together.