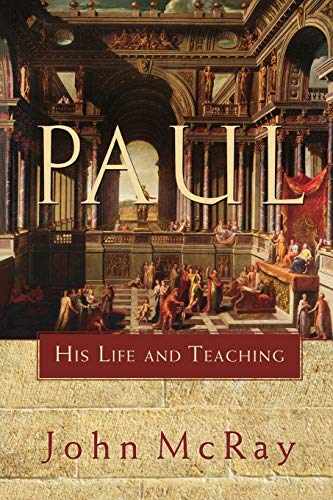 PAUL: HIS LIFE AND TEACHING

McRay, an Emeritus Professor at Wheaton College Graduate School, is well known for his expertise in NT archaeology Paul: His Life and Teaching is a college-level textbook in which McRay’s evangelical commitments to the Bible are clearly in the forefront. He has a high view of the historicity of Acts, agrees to the Pauline authorship of all thirteen canonical epistles, and takes seriously Paul’s statements about reality. McRay even integrates the theology from Hebrews at several points.

As the title suggests, Paul: His Life and Teaching is separated into two major sections: ‘Paul’s Life’ and ‘Paul’s Teaching’.

The ‘Paul’s Life’ section has very conservative and traditional conclusions. McRay marches through Paul’s life in chronological order, primarily relying on the book of Acts. Interspersed in this section are brief discussions of all of Paul’s letters and their relationship to the Sitz im Leben of Paul and/or his addresses. McRay is at his best describing each town that Paul visited and how this may have influenced aspects of Paul’s letters. McRay includes many photographs and interesting archaeological information. I can recommend the ‘Paul’s Life’ section as an informative, evangelical, college-level text.

McRay’s ‘Paul’s Teaching’ section is unusual in two senses: (1) there are many departures from Reformation and evangelical views of Paul, especially given that the previous section was so traditional and (2) there are standard Pauline topics that are not discussed (e.g. flesh/Spirit, already/not-yet, Trinity, Adam/Christ parallels, union with Christ, technical definition of ‘justification’), along with minor topics discussed in detail (e.g., seven-heaven cosmology).

Three foci are interrelated. (1) The central theme of Paul’s entire ministry is his ‘role as a Jewish minister to the Gentiles’ (339). (2) Aspects of the ‘New Perspective on Paul’ are included (e.g. ‘works of the law’ does not equal a merit method of salvation, but simply becoming a Jew; the Reformation view of justification by faith is wrong: ‘pistis Christou’ formula (e.g. Rom. 3:22) is to be translated ‘faithfulness of Jesus’, not ‘faith in Jesus’). (3) Following Jean Danielou, Paul has been influenced by a first-century Jewish apocalyptic-cosmology that includes various ‘heavens’ and demonology.

Ephesians is very important for McRay and is the ‘heart of Paul’ (334) because it concentrates on the implications of the union of Jews and Gentiles. Ephesians is also important because it uses Jewish-apocalyptic ‘heavens’ language.

Paul is not against the Judaizers’ use of OT law because they are using it for legalistic merit (Reformations view), but because it divides Jews and Gentiles. By demanding circumcision for Gentiles, the Judaizers ‘were making God a national God of the Jews just as the pagans nationalized their gods in their idolatry’ (368). Hence, being ‘under the law’ is a demonic return to the idolatry of an individual god for each nation.

Related to his Jew/Gentile motif, McRay has a long discussion of teleion (‘perfect’) from 1 Corinthians 13:10. He concludes that the ‘perfect’ is the integration of the Gentile and Jewish aspects of the Church. This ‘perfect’ has already come and the charismatic gifts have already ceased with the ‘deaths of the charismatically gifted apostles’ (435). Hence, the ‘perfect’ was not referring to either the completion of the Bible or the Second Coming.

‘For Paul the one central, surpassing truth is the incarnation of Jesus for the purpose of making atonement for all nations, Gentiles as well as Jews’ (302). McRay has a multifaceted view of the atonement, with an emphasis on how it destroys the demonic-idolatrous division of peoples. The atonement does take away personal sins, although McRay never clearly explains how.

Due to length constraints, I will not argue but simply state that I am not convinced by any aspect of McRay’s three major foci. Therefore, as opposed to the ‘Paul’s Life’ section, I do not recommend the ‘Paul’s Teaching’ section as a reliable guide for evangelicals.