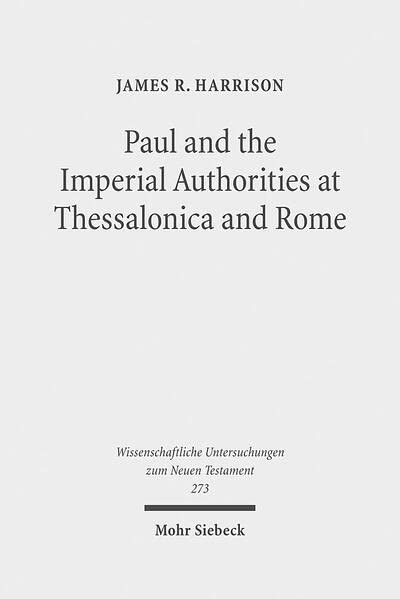 Paul and the Imperial Authorities at Thessalonica and Rome: A Study in the Conflict of Ideology

If the last two decades of the twentieth century witnessed an intense interest in Paul’s relationship to Judaism and Torah, Pauline scholarship at the beginning of the twenty-first century is preoccupied largely with Paul in his Roman imperial context. While N. T. Wright, Richard Horsley, and Dieter Georgi and others have contributed significant studies to situating Paul within a setting of Roman ideology, Harrison’s work is perhaps the most sophisticated study of the topic to date. Harrison’s central argument is that Paul’s gospel “engaged the Julio-Claudian conception of rule” and countered and remapped this symbolic universe through the “proclamation of the reign of the crucified, risen and returning Son of God over his world” (p. 1). Whereas Rome claimed to have established rule over the world through its military power and the emperor’s benefaction, Paul argues that God had established an eternal kingdom through the Messiah’s crucifixion which defeated humanity’s cosmic enemies and resulted in the giving of gifts to the body of Christ (p. 39). Harrison’s thesis is bold as he argues that the conflict between Paul’s gospel and Roman conceptions of rule is not simply how an auditor might have interpreted Paul’s letters; rather, “it is Paul who, through the rich presentation of his eschatology, intentionally drove home the ideological collision” (p. 40, italics his).

How does Harrison justify the claim that Paul opposed Roman conceptions of rule with Christ’s reign given that Paul does not refer directly to Caesar? First, Harrison argues that since many of the cities in which Paul established churches were familiar with the imperial cult, “imperial conception of rule would have been sufficiently known” to Paul and his auditors (pp. 26–27). Second, he invokes the concept of “hidden transcripts” and “codes,” which Paul used diplomatically to ensure that “political divisions over the ruler did not split believers” (p. 33). Third, Paul’s anti-imperial agenda can be discerned through (a) unusual additions to traditional pre-Pauline creeds, (b) motifs particular to an imperial context, (c) emphasis on Pauline themes that were prominent in imperial ideology, (d) Pauline phrases shared with imperial propaganda, and (e) overlap between Septuagintal and imperial terminology in Paul’s letters.

Harrison’s argument unfolds with six case studies: two devoted to the Thessalonian correspondence (chs. 2–3) and four to Romans (chs. 4–7). In 1 Thess 4:13–5:11, Paul counters “the widespread circulation of Augustan apotheosis traditions” through applying a variety of imperial terms (e.g., “ parousia,” “epiphany,” “meeting,” “salvation,” and “hope”) to the return of the heavenly Christ. When Paul speaks of the Lord’s eschatological judgment of those who proclaim the slogan “peace and security” (1 Thess 5:3), he directly opposes the Pax Romana by the coming Day of the Lord. Harrison argues that in 2 Thess 2:1–10 it is Caligula who is “the man of lawlessness,” exalted himself as deity, and sought to defile the Jerusalem temple by establishing the imperial cult therein. Paul responds by claiming that the heavenly Son of God will destroy the Antichrist just “as the recent demise of his ‘demonized’ precursor, Caligula, had amply demonstrated” (p. 89).

In chapter 4, Harrison turns to Paul’s epistle to the Romans and argues that Paul subverts Julio-Claudian conceptions of the present time as the Golden Age of Saturn by portraying all of humanity as subject to the reign of sin and death. In contrast to Augustus’s inauguration of Saturn’s Golden Age, Paul sets forth the Jewish Messiah as the sole agent who can triumph over the sin and death of the current age.

Harrison then compares “the Rule of the Caesars” with “Christ as Eschatological Ruler.” He argues,

Paul’s portrayal of Christ as the eschatological figure of world and cosmic history would have registered with Romans imbued with the Augustan conception of rule. . . .

[I]n focusing on eschatology as an important theological theme in Romans, Paul engages implicitly with the Julio-Claudian conception of rule as promoted in the imperial propaganda of the Greek East and the Latin West. (pp. 144–45)

So in Rom 1:3–4 Paul sets forth the narrative of Jesus as a challenge to Roman conceptions of apotheosis, to the military virtues of the Roman rulers, and to the “plethora of honorific titles credited to the Roman ruler” (p. 150). With respect to Rom 8:18ff., Paul’s vivid language to describe creation’s suffering in the present age proves that the idyllic cosmological propaganda associated with the imperial Golden Age is false (p. 157).

Chapter 5 argues that there is terminological overlap between imperial inscriptional propaganda and Rom 5:1–11 and that the latter is Paul’s attempt to herald a new and superior Benefactor—a royal son of David—who alone could provide peace, grace, glory, and reconciliation. Chapter 6 suggests that Paul’s language of “glory” should be read against the context of the Roman nobiles’ quest for glory and its eventual embodiment in the house of Augustus. Paul directly addressed this issue for the Roman believers and polemicized against it by transferring “glory” to God, by describing idolatry—the imperial cult—as wrongful exchange of divine glory (Rom 1:23) and by connecting the quest for glory with a turning away from God (Rom 3:23). Finally, chapter 7 surveys Hellenistic and Roman literature on the ideal king and Jewish texts on obedience to Gentile rulers as the context for understanding Rom 13:1–7. He argues that Paul’s exhortations “alerts his readers to the dangers posed by the imperial authorities, and spells out the ruler’s limitations of power so that Roman believers might learn how to placate the authorities by astute civic behavior” (p. 308).

Harrison’s volume successfully demonstrates how some of Paul’s auditors may have construed some of his rhetoric as anti-imperial. Most convincing is his argument that 1 Thess 4–5 challenges Augustan apotheosis traditions and his claim that Paul’s presentation of Jesus as “Eschatological Ruler” subverts imperial conceptions of the rule of the Caesars. While the book is impressively researched and contains a wealth of significant information for NT scholars, I am not convinced that Harrison has justified his claim that Paul intentionally engages in anti-imperial rhetoric. Certainly some of his auditors may have construed his language this way, and in practice Harrison refers to Paul’s auditors much more frequently than he does Paul’s intentions (e.g., pp. 86, 100–101, 104, 110, 138). Often Harrison’s arguments have this sense: “Roman imperial conceptions of X were ubiquitous in Thessalonica and Rome; therefore, Paul must have been aware and concerned with this aspect of Roman ideology.” The obvious problem is that Paul never directly mentions Rome as Empire, Caesar, or the imperial cult. Thus, while I learned much from Harrison’s book, many of his arguments remain at the level of possible background rather than direct foreground for understanding Paul’s epistles.