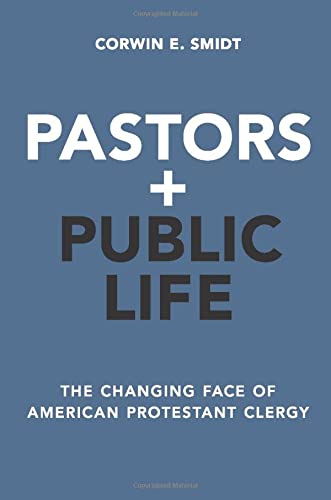 Pastors are political elites. So says Professor Emeritus of Political Science at Calvin College, Corwin E. Smidt, in his recent book Pastors and Public Life. Elites, not by virtue of their net-worth or family ties or academic pedigree, but because of the unique position they occupy in American culture. Pastors are, by definition, public figures and thus opinion-shapers. They exert significant influence over members of their congregation and thus play a strategic role in shaping American public life.

But who are they—these Protestant clergy? What do they believe? How do they engage in public and political life? Or how do they shape the attitudes and actions of their congregants? And how have their own political beliefs and behaviors changed over the years? These are the kinds of questions Smidt explores in this intriguing study. Smidt analyzes data drawn from three major surveys of Protestant clergy from seven different denominations over a twenty-year period (taken in 1989, 2001, and 2009). His theme is how mainline and evangelical Protestant clergy engage in public and political life while his focus, and the main contribution of this study, is the question of continuity and change—how have the perspective and practices of Protestant clergy changed or stayed the same over this period of time?

Before delving into the specifics, let me first clarify the kind of book this is. It’s a serious social scientific study. Some readers may find it a bit technical at points, and others a bit tedious at times. For those like me who didn’t take statistics in college, some facets of this work may be lost on you. But these are just little peccadillos. Overall, this is a fascinating (even if it not very exciting) read. Written by a seasoned scholar, it reads like a doctoral dissertation: quite analytical, lots of data analysis, very clear structure, methodical arguments, judicious conclusions. No jokes, stories, charming asides, creative turns-of-phrase, or meandering sentences. And no pictures. Just lots of graphs and charts and tables. This is not a criticism. It’s meant to give you a feel for the kind of book this is. We should expect nothing less from an Oxford University Press publication in the social sciences written by a veteran academic.

In the Introduction, Smidt describes the changing world of Protestant clergy—how the social, political, and religious landscape within which both mainline and evangelical Protestant ministers serve has not been static but fluid. Yet despite the changes he describes, there has been little attention given to how Protestant clergy themselves have changed—both in their outlook and actions. Hence, the specific focus of this study.

In Chapter 2 Smidt asks about the social composition of Protestant clergy. While, as Smidt says, Protestant clergy are still predominantly “white, male, married and rather well educated,” there have been several notable changes of the years. First, there has been a “feminization of the clergy,” that is, an increasing number of women have entered the ministry, especially within the mainline traditions (the percentage of female clergy nearly tripled from 1989 to 2009). Second, clergy are getting older, what Smidt calls the “graying of the profession.” Today, forty-three percent of clergy are over 55 years of age, while only 13 percent are under the age of 40—a substantial drop since 1989. Additionally, we’ve seen a shift in marital status. Again, while the majority of clergy are married, an increasing number are single or divorced.

But understanding levels of theological orthodoxy among Protestant clergy turns out not to be as relevant as understanding their social theologies. This is the question to which Smidt turns in Chapter 4—how should the church relate to its cultural and political context? The data shows that most clergy believe religion has positive benefits on American political life. At the same time, most clergy recognize that there are different ways of relating the Christian faith to social and political concerns. Encouragingly, research shows that Protestant clergy have rather nuanced social theologies—contrary to how they’re often portrayed in the media.

Chapter 5 takes a look at how religious convictions shape specific political issues like social welfare policy, cultural issues, and foreign policy. The most important pattern that emerges is the growing ideological polarization of Protestant clergy. From 1989 to 2009, there was a marked increase in percentages of those who label themselves on the “extreme” end of the ideological spectrum. For those who identify as liberal, it went from 9 to 17 percent, while for those who identify as conservative, it went from 22 to 44 percent. Why is this? Perhaps it reflects the ideological polarization of the country as a whole. In short, the so-called “political middle” is collapsing, not only in American culture but among Protestant clergy as well. But, interestingly, the percentage of clergy who identify as conservative has increased over this same period of time. At the same time, clergy today are more likely to consider themselves as more politically liberal than their congregations, thus there is a widening “gap” between clergy and their congregations, at least on certain political issues.

In Chapter 7 Smidt invites us to consider two major ways in which Protestant clergy seek to influence the political outlook and actions of their congregants. First, he looks at how clergy use cue-giving to shape the political views; and, second, he analyzes how the congregation itself can become a site for political learning. Cue-giving is any form of communication that directs the receiver’s attention to some civic or political phenomena during the worship service, whether this is an aside in a sermon or the focus of congregational prayer. This kind of subtle but significant gesturing has remained fairly constant over the last twenty years. What has changed, however, is the influence of partisan identification of clergy political views. Now clergy are more likely to engage in cue-giving activities because of their partisan identification rather than because of their theological commitments. To put it differently, the most reliable predictor of whether a pastor will try to shape his congregations political views is to look at that pastor’s political commitments rather than his theological orientation.

But to what extent to Protestant clergy engage in political activism, and how has this changed? Chapter 8 explores these questions. Of particular note is data that shows that while clergy continue to make public pronouncements about political issues, they speak more frequently today about issues related to “justice” and “equality” (e.g., civil rights, gender equity, unemployment). Yet despite increased interest in social justice (as opposed to moral reform), clergy today are no more likely to engage in political activism than they were twenty years ago. And as it relates to the partisan ends of their political engagement, Protestant clergy are, on the whole, more likely to be Republican than Democrat—and their partisan identification is a better predictor of their voting habits than their theology.

In a concluding chapter Smidt summarizes the key findings of his study, noting the sociological, theological and political changes that have occurred from 1989 to 2009. He also offers several observations about the challenges Protestant clergy face in their role as public and political actors. Their strategic role in American life is weakening as is their authority over the thoughts and views of their congregants. Additionally, as mobility and congregation-switching has increased over time, so clergy are ministering in more politically and ideologically homogenous congregations. Today churches are more constituted by the social and political characteristics of their members than by shared geography.

Let me conclude this review with several observations that stood out. First, I was reminded of the importance of congregations in both the public and political life of the United States. Large swaths of the American populace still attend worship on a regular basis. In fact, membership in congregations is greater than membership in all other voluntary associations combined. This means that congregations are significant influences in American public and political life simply by virtue of their weekly public gatherings.

Second, my appreciation for the importance of clergy as leaders within their local congregations grew through reading this study. In particular, I appreciated the author’s discussion about cue-giving as a means of shaping the political views and actions of congregants. While cue-giving is by definition a subtle activity, it is by no means insignificant. In fact, when cues are given from the pulpit, like a wink among close friends, it can be highly significant—even catalytic.

Third, I was cheered by data that shows that Protestant clergy have fairly nuanced views about how the Christian faith ought to inform their political views. Unfortunately, we’re often presented with cartoonish characterizations of Bible-thumping clergy who paint everything with a single color. But the reality is that most clergy are quite thoughtful and measured in their political views. They’re able to make sense of competing priorities and live with political tensions—a sign of health and maturity.

On the other hand, I am disconcerted by the fact that Protestant clergy are increasing ideologically polarized, like American society. Although there’s been only modest change in how clergy view specific issues, there’s been substantial change in how they identify themselves ideologically. More clergy identify at the ends of the ideological spectrum. Relatedly, the percentage of independents has dropped considerably in the last several decades. This doesn’t bode well for the clergy’s ability to ameliorate the political polarization of American society.

Finally, one of the most fascinating issues surfaced by this research is what influences a clergy’s partisan identification or voting habits. The data suggests that political ideology, rather than theological orientation, has a stronger influence. In fact, the evidence suggests that clergy have a tendency to align their theology to their political ideology—not the other way around. Evidently, the political tail is wagging the theological dog. Of course, this raises the ticklish issue of the role of Scripture in shaping how pastors approach public life, something that should be of particular concern to the very ones under consideration in this study—and perhaps those reading this review—namely, Protestant clergy.