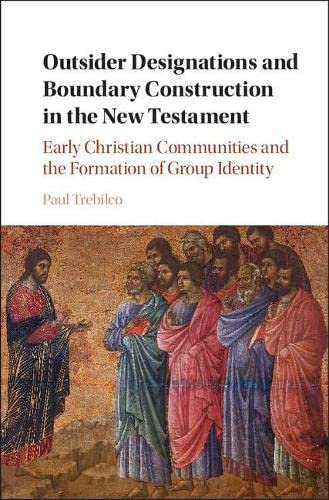 Outsider Designations and Boundary Construction in the New Testament: Christian Communities and the Formation of Group Identity

Some of the richest insights when interpreting the Bible come when readers attend to its subtle details. In Outsider Designations and Boundary Construction in the New Testament, Paul Trebilco demonstrates the fruit of such labor. A NT professor at the University of Otago, he has previously written on the subject of self-designations and group identity in the early church. Trebilco now turns his attention to the way that a close study of outsider designations can assist in the exegesis of Scripture and shed light on the early Christian movement.

Aside from an introduction and conclusion, the book has nine chapters. It begins by explaining Treblico’s methodological approach. He draws from multiple disciplines, including social identity theory, sociolinguistics, and the sociology of deviance. He then surveys a broad range of terms found in the Bible to distinguish outsiders from insiders. Some designations were common to the surrounding culture. Others stem from the LXX, including “sinners,” “transgressors,” “evil doers,” and “the unrighteous.” These observations illustrate continuity between the early church and its Jewish roots. As will be seen, this background also highlights the contrasting ways that Christians refashioned such language for their own purposes.

Biblical writers demonstrate flexibility and creativity when using outsider designations. For instance, Treblico highlights the uncommon (if not unprecedented) use of ἄπιστος to identify outsiders as “unbelievers.” He adds, “‘Unbelievers’ as a designation is a strongly negative term that creates a much higher boundary than ‘low boundary terms’ like ‘neighbours’, or ‘all people’. Those designated by this term do not have the key insider-feature of πίστις” (p. 51).

Even more generic terms for “outsider” (e.g., οἱ ἔξω, οἱ ἔξωθεν, ἰδιώτης) draw a clear distinction between insiders and outsiders. Trebilco sharpens the point by noting how ancient writers made a “strong contrast between ἀδελφοί and all other non-family members who are ‘outwards’ – ἔξω” (p. 100). Still, he warns against the impression that outsider designations were intended to “vilify or demean outsiders.” In 1 Corinthians, for example, “[Paul] encourages social differentiation from these clearly labelled ‘outsiders’ but without a corresponding social distance” (p. 58).

The discussion of οἱ ἁμαρτωλοί (“the sinners”) in chapter 6 typifies the insights offered in the book. It shows how Jesus and Paul altered conventional ways of using ἁμαρτωλοί. In the Gospels, Jesus undermined this well-known outsider label in two ways. First, he applies the term ἁμαρτωλοί to those whom he accepts as followers. Second, one sees in other passages, “Jesus is redefining ‘sinners’: they are no longer blatant law-breakers, but rather those who reject him” (p. 129). As Trebilco summarizes, Jesus “un-othered the other.” Despite appearances, Paul like Jesus also subverts the term by contending that “‘sinners’ need be outsiders no longer” (p. 140). Paul does so by designating all humanity as ἁμαρτωλοί, magnifying the extensive reach and power of sin.

Trebilco shows respect for context and nuance. This is a consistent strength in his analysis. He observes how terms like τὰ ἔθνη and οἱ Ἰουδαῖοι function in seeming contrary ways depending on context. While the former routinely denotes “Gentiles” or “all nations” (i.e., outsiders with respect to Jews), Paul describes non-Jewish Christ-believers as “former Gentiles.” Thus, a Jewish term for outsiders is reapplied to non-Christian outsiders. Other authors also adapt the meaning of ἔθνος, referring to “new community of Jesus’ followers in Matt 21:43 and 1 Pet 2:9” (p. 176). Likewise, writers use Ἰουδαῖοι to suit their need. While “Jew” can refer to an ethnic or political identity, it can signify outsiders who oppose Jesus (cf. John’s Gospel) or are outsiders to the Christian movement (cf. Acts). Alternatively, it becomes a positive designation for insiders, even Gentile believers, in Rom 2:26–29 (cf. Rev 2:9).

The NT epistles exemplify a major theme found throughout the book. According to Trebilco, NT writers strategically blend high boundary terms as “a clear demarcation of group identity” and low boundary terms to “encourage interaction and mission” among outsiders (p. 279). Strong boundary lines serve different purposes. In 1 Corinthians, Paul’s outsider language seeks to “reinforce the distinctiveness and ‘set-apartness’ of the Christian community,” whose identity was threatened by their conformity to the surrounding culture (p. 215).

In Romans, Paul’s critique of outsiders is indirect. The function of outsider terms is to highlight the significant change brought about by Christ. However, in some passages, “the actual language he uses to refer to outsiders encourages harmonious relations” (p. 225). Thus, in Rom 12:14–13:10, Paul “avoids (whether consciously or unconsciously) terms that create a strong social and theological dualism” (p. 231).

While Trebilco broadens our understanding of the NT, the book’s most significant contribution might lie elsewhere. His insights equip readers to construct a practical theology whereby the church can discern its identity in relationship to the world. The early Christians’ use of terms reveals the conscious and/or unconscious ways that Christ reshaped their identity and mission. Trebilco gives a practical implication of outsider designation when he says, “High group boundaries enable them to cope with persecution and resonate with the call to endurance” (p. 239).

The early church did not eradicate all social distinctions; in a sense, they reinforced the lines that distinguished insiders from outsiders. Trebilco concludes, “to undermine all outsider labels would be to destroy group boundaries and hence group identity” (p. 286). Accordingly, this book will benefit anyone who wants to consider how biblical writers both understood and shaped the church’s sense of identity amid diverse social groups.