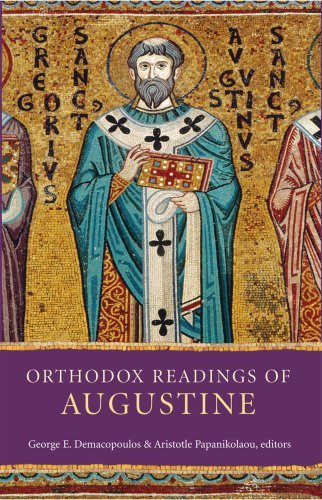 The proceedings published from the Orthodox Readings of Augustine Conference address a topic that continues to become more popular and important. There is an ongoing debate concerning if and how the Eastern and Western traditions compare to one another. The first chapter introduces the history of how the East has viewed Augustine. Although he was declared a Saint as early as 553, in recent scholarship Augustine has been labeled the problem with the West, and some even claim that Augustine is the father of modern day atheism. No one from this extreme school was included in the volume. The purpose of the work overall seemed to be to react to the new paradigm that bifurcates the two traditions and creates an extreme dichotomy that positions Augustine against the East.

There is a variety of articles that range from textual study to theological analysis. Elizabeth Fisher explains the significance of Augustine’s De Trinitatae being translated into Greek. Joseph Leinhard provides evidence that Augustine was familiar with Basil and Gregory of Nazianzus where he quotes their work to defend his own position when debating Julian. Surprisingly, there were very few comparisons between Augustine and these two Eastern Fathers in other essays. Most comparisons were with later Fathers who would have been familiar with Augustine’s work or Gregory of Nyssa, the “Cappadocian” who has risen in popularity only in recent scholarship. Daley argues that Maximus the Confessor was influenced by Augustine concerning the doctrines of sin and grace. Reinhard Flogaus shows that Gregory of Palamos depends upon Augustine in his theological writings. These articles all prove that Augustine traditionally has been considered a reliable source for Orthodox teaching and an inspiration to many Greek Fathers. David Tracy presents a history of how Augustine’s works have been received from Wittgenstein to Hegel and how Augustine’s Christology was at the center of all his work. Andrew Louth concludes the work by presenting the pastoral heart of Augustine that the Eastern Fathers could appreciate and even identify with.

Others argue that Augustine’s doctrine has been misunderstood in the Eastern tradition. The major doctrinal issues presented as separating the East and West include the filioque clause, the nature of theology, and theosis. The filioque clause has certainly been a clear difference in the East and West, but may not be as absolute a difference between Augustine and the Cappadocians as Ayres and Behr argue in their articles. The former establishes that simplicity and the Monarchia of the Father are foundational in both traditions. The latter argues that what really separates the two traditions is the East’s starting with God as Father and the West’s beginning with God who is Father, Son, and Holy Spirit.

The difference in the nature of theology mainly concerns the difference between apophatic and katophatictheology. The difference among the traditions over theosis derives from the East’s dividing the essence and energy of God while the West does not. Many of the authors, especially Marion, Hart, Bradshaw, and Harrison, demonstrate that these differences are only apparent.

The reasons that comparing the traditions of East and West is difficult are obvious in the work. First, the East does not have a central figure comparable to Augustine. The East has a great number of influential theologians, but no one figure who wrote as extensively and was as influential in so many major doctrinal formulations. Many of the contributors choose different key figures from the fourth to the thirteenth century to focus upon and can compare only aspects of their doctrine to Augustine. Augustine’s being such a large figure who wrote voluminously causes another problem. The Augustinian scholars disagree among themselves to the point that it is difficult to know which Augustine is supposed to be compared to the Greek Fathers. This is evident in the disagreement between Hart and Bradshaw.