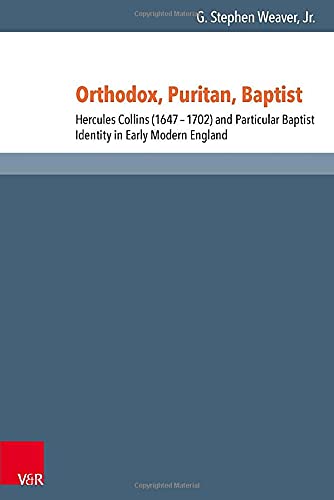 The academy has experienced a recent spike in the focused study of early Baptist figures, with recent offerings highlighting the work of Thomas Grantham, Benjamin Keach, and William Kiffin—to name a few. The interest in these early modern figures has proven to be more than merely academic, reserved solely for PhD candidates eager to demonstrate their own academic prowess. Rather, the scholarship that has developed has proven to be beneficial for the church as a whole, with pastors and laity alike learning from the type of intensive scholarship that leads to a theological biography of those who have served the church in generations past.

G. Stephen Weaver, Jr.’s revised PhD dissertation on Hercules Collins (1647–1702) further solidifies the general value of these studies. Weaver focuses on the life and ministry of one of the lesser-known—though certainly not less important—early Particular Baptist ministers. Weaver expertly interweaves the historical accounts of Collins’s life and writings with pertinent cultural and historical context, aiming to present a full-orbed discussion of Collins’s theological legacy. By all accounts, Weaver succeeds masterfully in his endeavor. The Hercules Collins presented in this volume is an engaging historical figure with a keen ability to insert himself in the major arguments of his day without succumbing to the real danger of losing sight of his primary calling: the oversight of the local congregation. After reading Weaver’s account, one cannot help but be rightly impressed by Collins’s care for his family, his congregation, and his fellow pastors. His ability to engage the wider community on behalf of Baptist theology, while simultaneously maintaining intimate pastoral oversight, serves as a keen example for the pastor in the 21st century. The fact that Collins did this in the midst of persecution from the establishment only further solidifies both his legacy and the value of this particular study.

Weaver’s work not only introduces the reader to Hercules Collins, but it also introduces the neophyte historian to some of the complexities associated with the study of the early modern period in which Collins lived. Weaver deftly tackles the ever-present conundrum associated with defining terms like Puritan. While some historians would certainly disagree with Weaver’s definitions, no reader can argue that Weaver has been anything but clear. That perspicuity aids the reader in understanding Collins’s cultural context and ultimately his legacy, allowing the reader not only to become familiar with Collins, but also to gain wisdom from the minister’s life and struggles.

The work, though valuable, is not without its problems. Weaver at times pushes his conclusions beyond the point supported by the cited evidence. One example will suffice, both to demonstrate the problem, but also to show its relatively minor nature. In his discussion of Collins’s adaptation of the Heidelberg Catechism for Baptist use, Weaver argues that Collins “would follow the General Baptists’ An Orthodox Creed in adding the Nicene and Athanasian Creeds” to the Apostles Creed originally found in the Heidelberg Catechism (p. 77). The basic information in this statement is undeniable and noteworthy. Collins did indeed insert the two creeds in his new Baptist catechism. Despite Weaver providing a footnote with three additional proofs of Collins’s dependence on the General Baptist’s Orthodox Creed, the claim, in this reader’s opinion, has been shown only to be a probability. More discussion is both needed and desired—especially given the historical significance if the claim is shown to be warranted. Readers should note that this pressing of the evidence does not occur often in Weaver’s work and never in an egregious manner. The rare instances provide places for fine-tuning—rather than massive overhauls—in future work from Weaver. Overall, the publishing is of high quality—though the book’s high cost and dissertation feel will put it out of reach for many average readers.

Weaver’s work proves to be an extremely beneficial addition to the study of early Baptist history. The work is a must have for all students of the era as it shines a unique light on this previously under-studied leader of the Particular Baptists. Anyone who desires to learn from history and to understand the crucible in which Baptist theology was forged will find the work to be an excellent addition to a personal library.