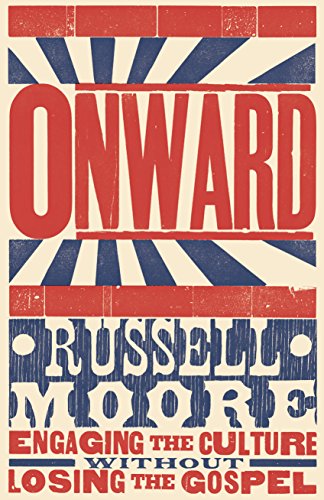 Onward: Engaging the Culture without Losing the Gospel

If Christians once served as the core of a moral majority in America, it is now clear that day has passed. It is no longer just the miracles and the cross that seem strange to our culture; it is the Christian ethic that now seems “freakish.” The question being asked by Christians, even more so post-Obergefell, is “what should we do?” This is a central question being answered by Russell Moore in Onward: Engaging the Culture without Losing the Gospel.

The introduction and opening two chapters provide an overview of the current situation Christians find themselves in within the culture and points forward to Moore’s overall approach. Moore recognizes that there is no turning back to what seems to some the “good ol’ days,” characterized by “God and Country” Christianity. The Bible Belt is crumbling, and Moore says “good riddance” to the cultural Christianity that came with it. His concern is that “values” were emphasized over gospel and thus, “Christianity became a totem to secure a happy marriage, a successful career, well-behaved children—all that, and eternal life too. Such a Christianity doesn’t have a Galilean accent—but rather the studied clip of a telemarketer. It sought to normalize Christianity by finding a goal that the church and the culture could agree on, even if Jesus were resting comfortably in his borrowed grave” (p. 30).

Chapters three through five offers theological application on the topics of kingdom, culture, and mission. This leads to chapters on specific cultural issues (human dignity, the family, religious liberty, and the family). Finally, before concluding, Moore includes chapters on the importance of striking the right tone and what he labels a “Gospel Counter-Revolution.”

According to Moore, the answer to the question “what should we do?” is not to retreat, but neither is it to just continue doing what we have always done, except louder. Instead, the church must cultivate consciences that are burdened to proclaim the gospel, to recognize injustice, to mourn over unbelief and unrighteousness, and to move onward in embodying the Kingdom. He urges believers to not cave to cultural pressures but rather keep Christianity strange. And we are to do this with “voices shaped by the gospel, with a convictional kindness that recognizes that winning arguments is not enough if one is in the cosmic struggle with unseen principalities and powers in the air around us” (p. 221).

Moore could lightheartedly be described as Johnny Cash meets Abraham Kuyper meets Billy Graham. While citing Scripture, quoting country music lyrics, calling for repentance, and telling personal stories from the Bible Belt, Moore combines a knack for turning a phrase with serious theological reflection and penetrating application. His wit and insight are on display when, for example, explaining why the New Testament does not deal directly with the external moral climate of the Roman Empire: Rome, after all, was governed by an emperor, and the people of God had not say in the decisions made at the height of power. The pastoral epistles don’t direct the churches politically directly for the same reason that Philip gave no directions on marriage or sexual morality to the Ethiopian eunuch” (p. 107). To offer one more example of his wry sense of humor used to make an important point concerning tone and rhetoric, he writes,

If all we have to go on is what we see around us, then, of course, we will become scared and outraged, and our public witness will turn into an ongoing temper tantrum, designed just to prove our opponents, and to ourselves, that we are still here. And in doing so we would employ the rhetorical tricks of other insecure movements: sarcasm, vitriol, ridicule. But we are not the voice of the past, of the Bible Belt to a post-Christian culture of how good things used to be. We are the voice of the future, of the coming kingdom of God. The message of the kingdom isn’t “You kids, get off our lawn.” The message of the kingdom is, “Make way for the coming of the Lord.” (p. 203).

This last quote also displays another characteristic of this book, namely, balance. Moore challenges the either-or fallacies of cultural engagement. As if, to note just one major example, the church should choose between social justice or evangelism. The gospel framework cannot be kept separate from things the culture has deemed to be social or political issues. With this kind of “both-and” approach, Moore’s model has the potential of bringing different evangelical camps together. And yet, it also will undoubtedly cause uneasiness and even umbrage from those who are deeply embedded in their own tribe’s bunker. For some traditionalists who have embraced the hope of re-establishing a “Christian nation” and have grounded a discourse characterized by anger and resentment in a narrative of injury, Moore will likely come across as a sell-out. For those who have embraced a form of the social gospel—committed to humanitarian efforts but embarrassed by the call for personal conversion, talk of angels and demons, and the Bible’s sexual ethics—Moore will come across as an “old fashioned fundamentalist.” They, of course, would not mean this as a compliment. Moore, however, would likely take it as one.

On to a few minor quibbles. Some of the material feels slightly redundant. Perhaps this was because the book began in seed form as independently given articles and lectures. Admittedly, part of effective communicating is repetition, and the line between repetition and redundancy can be fine. But, some readers might sense that some of the points have already been sufficiently made. Also, Moore could have integrated more footnotes. Granted this was not written primarily for a scholarly audience, more often pointing readers to his conversation partners would have provided direction for further study, would have allowed him tip the hat to those who impacted his thought, and—for those more familiar with similar literature—would have provided a certainty concerning who in particular he is engaging or critiquing.

Onward is an outstanding book and deserves wide readership. Throughout the book Moore gives Christians reasons, despite the cultural trends, to be encouraged. Moore’s leadership, expressed in this book and more broadly in his work with the Ethics and Religious Liberty Commission, is another reason believers should be encouraged.