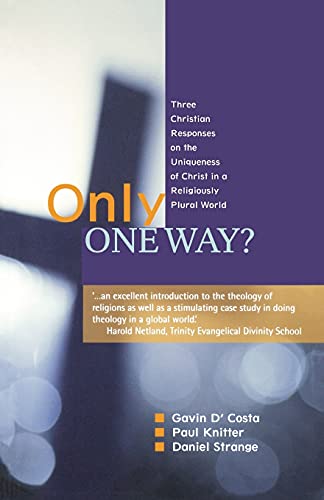 Only One Way? Three Christian Responses on the Uniqueness of Christ in a Religiously Plural World

As a result of globalization and mass migration, western Christians live in an increasingly pluralistic world. Growing awareness of this diversity raises some pressing questions. How should we view the teachings and practices of non-Christian religions? To what extent can we affirm the presence of truth and goodness in non-Christian religions and, if so, on what basis? Is it possible for adherents of non-Christian religions to experience salvation apart from the witness of the church? Formally, these questions are discussed within the “Christian theology of religions,” which emerged as a distinct theological discipline following Vatican II. In Only One Way? Three Christian Responses on the Uniqueness of Christ in a Religiously Plural World Gavin D'Costa, Paul Knitter, and Daniel Strange present three conflicting approaches to these questions. The book is divided in three sections. In the first section, each theologian outlines his constructive proposal. In the second, each critiques the other proposals. In the final section, each contributor responds to these criticisms.

Gavin D'Costa is a Catholic theologian who teaches at the University of Bristol. D'Costa roots his proposal in the official teachings of the Catholic Church (especially the conciliar documents of Vatican II). On the one hand, he insists that Jesus Christ alone is the source of salvation such that no salvation is possible apart from Christ and his church. On the other hand, non-Christians may experience salvation apart from the sacramental mediation of the institutional church. An important parallel exists between righteous Israelites before the coming of Christ (who were destined for salvation but did not know Christ) and those at the present time who have not heard the gospel. Just as Christ descended into hell to save righteous Jews (1 Pet 3:19), those at the present time who respond positively to the promptings of divine grace (through the universal work of the Spirit) may also experience salvation. This inchoate salvation is brought to completion through a post-mortem encounter with Christ in purgatory. Although non-Christian religions are not salvific, the Holy Spirit is nevertheless at work in them preparing non-Christians for the gospel through their institutions and practices (praeparatio evangelica). Moreover, non-Christian religions may, through positive elements, lead the church into a deeper understanding of Christian truth. In this context, the church serves as a light to the nations proclaiming the good news about Christ.

Paul Knitter is a Catholic who teaches theology, world religions, and culture at Union Theological Seminary. Although he is Catholic, his proposal departs significantly from teachings of the Magisterium. According to Knitter, all God-language is “symbolic.” The symbols we use can never adequately describe their object. The Christian symbol for God (Trinity) points us to a creating, communicating, and animating mystery. The Adamic “fall” is not a historic event but a symbol for negative realities that accompany the unfolding of evolution. The fundamental human problem is not “corruption” (i.e., original sin) but, as Buddhism teaches, “ignorance.” For Christians, Jesus Christ embodies the divine mystery that is beyond description. The death of Jesus should not be interpreted as “fixing something that was broken” (e.g., satisfying God's wrath, which amounts to divine child abuse) but rather interpreted as “embodying and making known” the mystery of God (p. 69). If we conceive of salvation as fixing what is broken, there can be only one savior; however, if we understand salvation simply as revealing God, room exists “for other revealers for other cultures and other historical periods” (p. 70). In this context, the Spirit “animates other religions as it animates Jesus and Christianity-in a diversity that, like the diversity of the triune God, enables ever greater unity among the religions but can never be reduced to only one religion” (p. 59).

Daniel Strange is a Reformed evangelical who teaches culture, religion, and theology at Oak Hill College. His proposal draws on Hendrick Kraemer, J. H. Bavinck, Cornelius Van Til and, more generally, Reformed tradition. The relationship between Christianity and non-Christian religions can be summarized in the following way: “non-Christians religions are essentially an idolatrous refashioning of divine revelation, which are antithetical and yet parasitic on Christian truth, and of which the gospel of Jesus Christ is the 'subversive fulfillment'” (p. 93). Strange argues that the biblical concept of idolatry offers a “sophisticated analytical tool” for thinking about non-Christian religions (p. 111). Although non-Christians have objective knowledge of God, they respond with suppression and exchange (Rom 1:17-32). It is important, however, to recognize that this suppression is not uniform but varies in depth and expression (due, in part, to common grace). As a result, there is both “principle discontinuity” and “practical continuity” between Christianity and other religions (p. 114). The former is rooted at the worldview level in the antithesis between light and darkness while the latter is rooted in the fact that non-Christian religions are inconsistent in practice. This inconsistency is rooted in common grace (the non-salvific work of the Holy Spirit), the imago Dei, and reception of primal revelation (prisca theologia). In this context, the gospel both confronts alternative religious worldviews and offers appealing answers to questions that other religions cannot themselves answer (i.e., subversive fulfillment).

One feature that differentiates Only One Way? from traditional “three views” books is the amount of space devoted to critical interaction among the contributors. Nearly half of this book is devoted to two separate rounds of dialogue. Not only does this help readers understand the position of each theologian more fully, but it also gives them a clearer picture of the underlying theological assumptions. A second strength relates to the way the presentations are structured to address the broad spectrum of theological issues that must be considered in developing a Christian theology of religions. Contributors discuss theological method, creation, fall, God, Christ, Trinity, salvation, eschatology, dialogue, justice, and mission vis-à-vis non-Christian religions. This structure helps readers (rightly) recognize that the debate over the theology of religions is not merely a dispute about soteriology (e.g., fate of the unevangelized) but includes a wide range of substantive theological questions. In this context, the differences among the contributors are rather striking. Moreover, this approach represents a welcome alternative to recent proposals in which some theologians present a single doctrine as the interpretive key to a Christian theology of religions (e.g., recent attempts to argue that the doctrine of the Trinity provides the key to affirming the validity of non-Christian religions). A final strength represents the way D'Costa, Knitter, and Strange engage directly, substantively, and charitably over their differences.

Apart from Knitter's references to Buddhism, readers will encounter little concrete interaction with non-Christian religions. This represents a primary weakness of the book. It might have been helpful for each contributor to pick a sample religion and show (at least in a cursory way) how his proposal leads a different “Christian” reading of that religion. It would have been helpful, for example, to see how Strange's “subversive fulfillment” approach would interpret Buddhism or Islam. Only One Way? offers a helpful introduction to current debate in the theology of religions and represents a useful classroom resource.

Keith Johnson (PhD in Christian Theology and Ethics, Duke University) is the director of theological education and development for Campus Crusade for Christ. He also serves as a guest professor of systematic theology at Reformed Theological Seminary. He is author of Rethinking the Trinity and Religious Pluralism: An Augustinian Assessment (IVP, forthcoming).